Noli Indian School students enrolled in the AVID (Advancement Via Individual Determination) program were given an assignment to write a children's fable and several were chosen to share it with the Soboba Tribal Preschool kindergartners.

"Some of my AVID students are interested in becoming writers so we utilized that time to have the students work as partners to write and illustrate their own Native American children's fable," said Alford, who is also the AVID teacher/coordinator at Noli.

The projects were presented to all 26 AVID students in grades 7 through 12 and ones picked from each grade by another class got to present their book to the kindergarten students at the nearby preschool. Noli Indian School, at the Soboba Band of Luiseño Indians Reservation, serves students in middle school and high school.

"We were asked to incorporate our cultural traditions into a story and make it into a book," said Vanessa Fernandez, 14.

The story of "The Fox and Deer" was written and beautifully illustrated by Vanessa, who is from the Navajo Nation. The moral of her fable is to accept who you are and not try to change it. She wrote about a mother fox who was jealous that her cub didn't have fur as pretty and shiny as a doe's fawn. So when the deer gave her some wayward advice on how the vixen could make her cub look different, the fox jumped at the opportunity, with unfortunate results.

"I got the idea from my grandma who always told me fables about animals - this was always one of my favorites," said Vanessa, who is a freshman at Noli. "The project was meant to help us work on teambuilding, critical thinking and presentation skills."

"Down the Well" by Lanise Luna and Darlene Chacon is about children who fell into a well when the oldest one wasn't watching them closely enough. The moral of the story is to be responsible for your siblings.

Frank Moreno and Michael Briones, both from the Soboba Band of Luiseño Indians, combined forces to write and illustrate "Friendship" that focuses on the playful interaction between wildlife animals throwing a surprise birthday party for their mountain lion friend.

Michael said they started the book by creating all the characters and giving each one a personality and then added some Luiseño words to the story.

"We wrote it so it talked about what your friends go through to demonstrate they are your true friends," said Frank, 13. "Then we added humor so it would be fun for the preschoolers."

Frank likes to write and recalled that he had previously created a book for a second-grade school project. He said he and Michael first outlined the plot before writing it all down. From that, Michael was able to create the illustrations.

"It was fun and easy to write and the story entertained us while we made the book," Frank said.

Kindergarten teacher Cindy Lee said the children enjoy when the high schoolers read to them.

"They look up to them and it inspires the kindergartners to write and illustrate their own stories," she said. "In addition, it helps with our own study of literacy genres that the kindergartners must identify which include fables, fairy tales, fiction, fantasy, non-fiction and informational text."

She said the AVID students brought the fables to life with beautiful illustrations and animated voices to their characters, which made her students enjoy the guest authors even more. 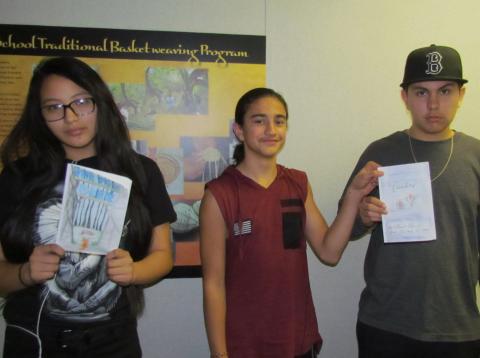 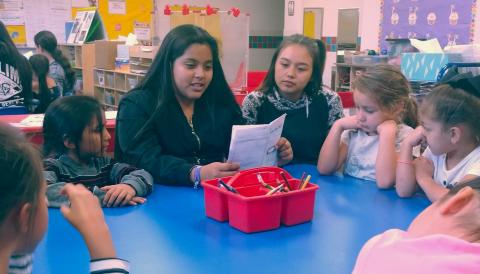 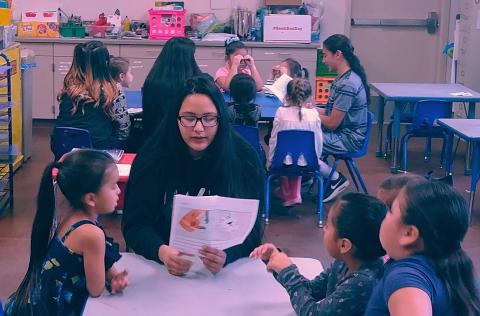 Vanessa Fernandez, front, shares her fable with kindergarten students while Frank Moreno reads his book to another group of students, back table 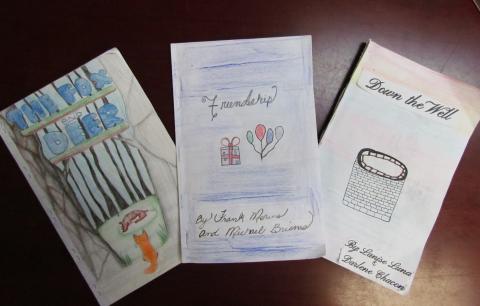