To engage young students even further with literacy, the Soboba Tribal Preschool recently unveiled an art project to serve as a focal point for that message. Lenora “Ponie” Mojado painted a tree mural on one of the large walls of the hallway and it is already making a statement.

Preschool director Dianne King said she had the vision for a tree mural and was researching a large decal to apply to the wall when other staff members told her that Mojado was a great artist.

“I approached her with the idea, and she ran with it,” King said. “She did an amazing job with great detail. It was definitely something that she put her heart into. The tree is also a symbol of her growth from a preschool student herself, to a parent of preschoolers and now to employment and continuing her education. Lenora is a true example of strength and knowledge, just like our tree.”

Mojado put down roots at the preschool when she began working there as a Tribal intern in 2017 and was hired as a permanent Instructional Aide in October of 2018. She currently works with the two-year-olds’ class. She is pursuing her associate degree in Child Development and Education from Mt. San Jacinto College and plans to continue to work at the preschool in a teaching capacity.

“Children are the future of this tribe and I want to help make their strong foundation,” she said. “Children have minds of their own and I love that about them.”

Mojado said she didn’t even realize she had artistic talent until she opted to draw the Cat in the Hat and Horton the Elephant on her classroom’s door for Dr. Seuss week in March. She was able to freehand the characters just by looking at their images, which is what she did with the tree mural.

“It was my first time drawing and it looked exactly like them,” she said. “In addition, putting together art projects for lesson plans and bulletin boards as well as the door made my art talent come out.”

Mojado attended the Soboba Band of Luiseño Indians reservation’s Ahmium preschool for two years when she was young. Her six-year-old son, Mac, graduated from the current tribal preschool’s kindergarten class in June and her son Eli is a student in the Pre-K class this year.

She said that the current preschool has offered her sons a safe environment in which to learn and she felt comfortable with the people she knew that already worked there. Mojado said working there while her children attend is an added bonus.

The preschool recently received books from the Tribal Child Care Association of CA, who partnered with Lakeshore to provide several activities for the children including Native literacy.

“We received six curriculum kits with various Native American materials,” King said. “Each kit had a couple of books in them along with many other Native American toys. We will keep the Native books for the teachers to read in class.

However, we have a lending library in the lobby for children to borrow books as they wish. They can either keep the book and donate another or just return the book when they are finished.  Our goal is to keep literacy alive in the home.”

Typically, throughout November, the teachers offer activities that culminate in a big family feast with students and parents. Because of the pandemic, this year activities are being sent home. Many of them are designed to open communication among families about how Native families have celebrated their heritage in the past.

To get the tree “ready” for its fall debut, construction paper was sent home to the students with instructions for parents to trace their child’s hand and return the paper “leaves” with their homework packets.

“The tree brings a sense of joy to see such a beautiful mural each day,” King said. “As an educator, we see children get preoccupied with toys and electronics. I hope that our tree will bring the excitement of reading back into the lives of children. There is so much to offer with books. It’s not just the story – it’s the bonding that takes place as you are reading to a child and the excitement in their eyes as they listen with anticipation. I would like to see this tree mural be an opportunity for anyone to use to have a quiet moment for themselves or to share a reading moment with their child.”

King said the Story Tree will tell the story of the seasons and holidays each month. The plan is to use it as a literary focus to highlight books with the changing seasons and related themes such as hibernation.
Another way in which the project will branch out and blossom is by having Mojado add Luiseño language words to the mural.

“Each branch of the Story Tree (or aa’alvish kalaawut in Luiseño) is going to have some strong encouraging words,” Mojado said. “I plan to put the words on the tree soon. I have to talk to my language teacher and get some ideas to brainstorm. Maybe the elders can come and add sayings or some encouraging words of wisdom, too.” 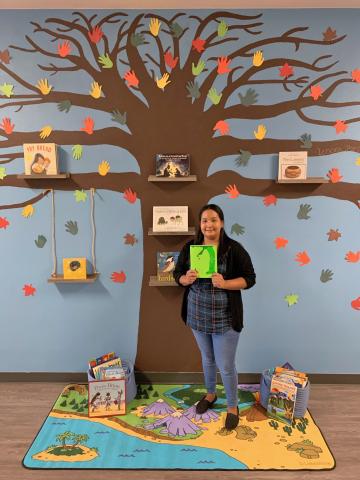 Lenora “Ponie” Mojado stands in front of the tree she painted on the wall of the Soboba Tribal Preschool’s hallway. Shelves on the branches and swing hold books that have a Native American theme and she is holding one of her favorite storybooks: The Giving Tree by Shel Silverstein 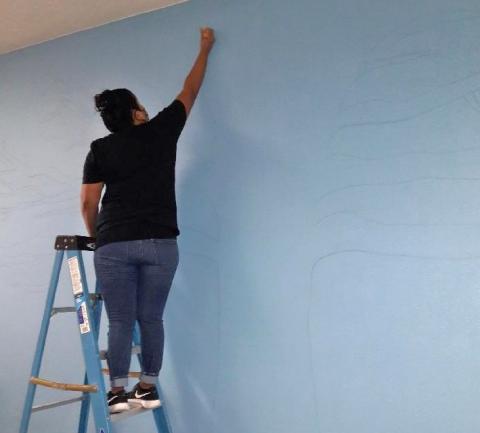 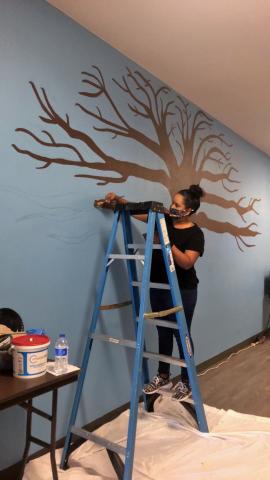 Lenora “Ponie” Mojado worked on the tree mural at Soboba Tribal Preschool several hours a week from August until late October. This month it was decorated with fall handprint “leaves” and Native American books to celebrate the fall season, Native American Heritage Month and literacy