Soboba Indian Reservation-From the Soboba Band of Luiseño Indian Reservation to the country of France with a few stops in between, basketball player Joseph Burton is eager to share his journey with others. One way he unites the two continents is through his Hanwut Clothing Company, a Native American owned and operated online store

“Hunwut means bear in Luiseño, my native language,” said Burton, 28. “Growing up playing basketball, many elders called me Hunwut because of my size and power so this is why the bear is an essential aspect in my designs and brand logo.” Burton had been thinking about starting a clothing brand for a long time but only being home about two months out of the year made it difficult. However, he found time to launch the business earlier this year because of an increased interest about his native roots by fans and followers.

“I tell them where I come from and my story about living on the reservation which surprises them,” he said. “They usually ask for a souvenir or item that represents Native Americans so I decided to create these designs so they can have a little bit of Native American culture with them always that will also remind them of the stories and conversations we have shared.”

Burton said a lot has changed on the Soboba Indian Reservation, which has always been home to him.

“We are expanding so much,” he said. “We now have a hotel and we changed the location of the casino and we are in the works of getting a convenience store and gas station on the reservation.”

After graduating from Hemet’s West Valley High School in 2009 and being ranked one of California’s top 100 high school basketball players, Burton accepted a full-ride scholarship to Oregon State University.

He was the first Native American men’s basketball player to earn a scholarship to a Pac-10/Pac-12 school. When he graduated in 2013, he became the first OSU player to finish his career with 1,000 points and 700 rebounds and 300 assists.

Burton feels that many people like to learn about new things and get educated on issues happening within the Native American culture. He can relate since he enjoys learning about the culture of various countries where he has played professional basketball. After a highly-successful career at Oregon State, he played in Denmark, then went to Holland, France, Japan and back to France. He plays forward/center for the ADA Blois Basket.

“Everything in Europe is small compared to American living and from the sport of basketball standpoint, it’s less physical and more about strategic formations,” he said.

He said that while there is no need to be fluent in a country’s language, it does help to learn it.

“There are players who know English but there are some that don’t know any,” Burton said. “Even this year, the coach couldn’t speak English very well but we had a coach who translated for us. “If it’s basketball talk, a lot of the terms and lingo are universal so you’ll be able to more easily pick it up.”

As Burton gets ready to return to France to embark on his seventh basketball season, he is also preparing for the birth of his second child, a daughter, this summer. He and his wife, DaiseJanay, met at high school about 13 years ago and have a son, three-year old Joseph Charles Lee Burton.

“Joseph is my dad’s and grandfather’s name,” he said. “Charles is for my grandpa Charles “B-Bop” Silvas who was a legend around Soboba, San Jacinto and Hemet. Lee is for my great-grandpa Lee, also from Soboba,” he explained.

Future plans for Hunwut Clothing include expanding to include hats, socks and other items and also to provide some community outreach to Native youth and minorities. He has done speaking engagements in the past and attended youth camps to motivate young athletes but hopes to do more once he has retired from basketball.

“I want to help the youth with education, sports and just general life skills,” Burton said. “Giving them opportunities to better themselves.” 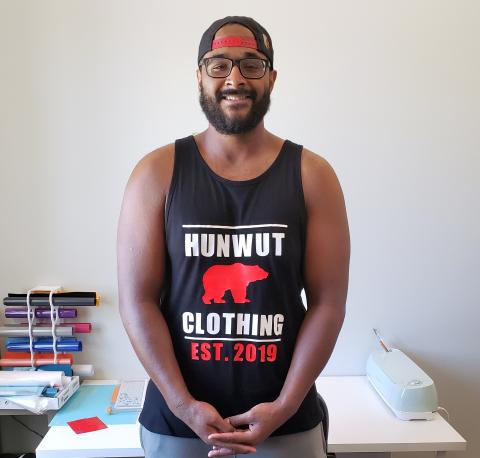