After a 10 a.m. Memorial Day Mass at St. Joseph’s Catholic Church at the Soboba Reservation, visitors made their way to the Veterans Memorial at the far end of the Soboba Cemetery to pay their respects during a Memorial Day Flag Raising ceremony on May 31. Dedicated “to the memory of the Soboba Band of Luiseño Indians and non-tribal members who gave their all for us” the shrine was decorated with a wreath and potted flowers in patriotic colors.

At dawn, members of the Soboba Fire Department raised the American flag, located on the flagpole behind the memorial, to full staff position and then slowly lowered it to half-staff to honor America’s fallen servicemen and women. During the ceremony, the flag was raised quickly to full staff in recognition of living military veterans who served their country. The flag remained at full staff until sunset. The crew did the same flag raising at their station, located on the Soboba Reservation.

Soboba Parks and Recreation Director Andy Silvas, who is also co-coordinator of the Soboba Youth Council, explained the ceremony is held “in memory and honor of those that gave their lives in service to this country so that we may have the freedoms that we have today.” He then introduced Father Earl Henley from St. Joseph’s, who offered a blessing.

“Our common Christian concern has brought us together to bless this (memorial) marker and pause for a moment in the silence of our heart, praying for those who have gone before us,” he said. “For all the soldiers, it is with reverence that we visit this sacred shrine on this special day and leave a wreath of worship at this monument.”

Youth Council members and cousins Emma Valenzuella, 16, and Jocie Yepa, 15, took turns reading the last roll call, a military tradition that pays honor to deceased soldiers. Emma’s great-grandfather, Paul Valenzuella, served in the U.S. Marine Corps and was one of the names on the list that was read. Edwin Muro, who has been on youth council for three years, said both his grandfather, Bruce Cozart and grandmother, Gloria Cozart, served in the U.S. Air Force.

Gloria Cozart, Jessie Gilmore and Theresa Seaton all enlisted in the U.S. Women’s Air Force at the same time. Seaton, who served from 1949 to 1952, was on hand Monday to assist with the flag raising alongside Soboba Fire Captain Gabe Herrera, Firefighter/Paramedic Keith Navarre and Firefighter Engineer Andrew Chavez.

Soboba Tribal Chairman Isaiah Vivanco, whose father served in the U.S. Air Force during the Vietnam War, said it was great to see Soboba’s youth work with Tribal elders to remember Tribal members who served in the Armed Forces.

“They’re sharing our history,” he said. “On behalf of Tribal Council, I want to thank you all for coming today and helping us remember our fellow tribal members. A special thanks goes to Marian Chacon who has been working with our youth council to identify the graves of those that lie within our cemetery and have served in our armed forces. It’s something that our youth has taken on and we are really appreciative of them doing that.”

The youths spent the morning of May 28 preparing the Soboba Cemetery for Monday’s ceremony. Working with an aerial view map, Silvas directed the young men and women to the more than 50 gravesites of veterans that are buried there so a flag could be placed there. They also took time to spruce up the sites.

Employees from Soboba Public Works had gone through the cemetery earlier that morning to rake up leaves, branches and debris that had been deposited on the paths between the gravesites. Members of the Soboba Fire Department picked up the piles and disposed of them in preparation for Monday’s ceremony.

U.S. Navy veteran Benny Helms, who served six years during the Vietnam War, said having the youth host a Memorial Day ceremony showed a lot of respect for all the veterans and he was glad to see them step up.

Soboba Youth Council Chairwoman Iyana Briones concluded the ceremony by inviting all guests to drive to the Sports Complex and pick up a to-go brunch meal, prepared by Thomas Catering of San Jacinto. Youth council members bagged the items and delivered them to the vehicles that drove through the parking lot of the complex. 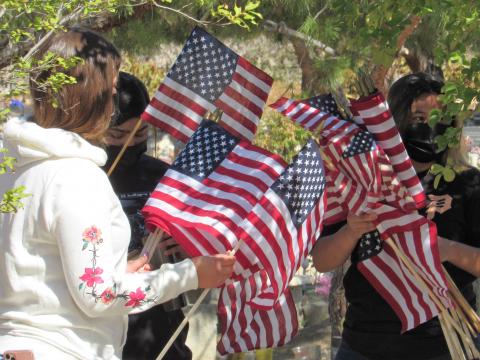 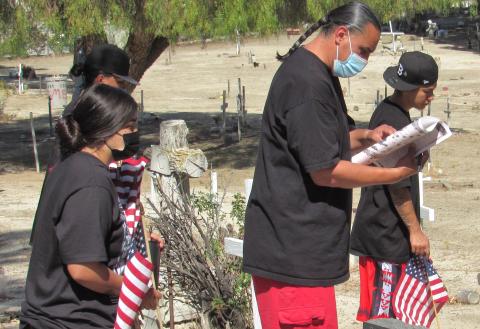 Soboba Parks and Recreation Director Andy Silvas, who is also co-coordinator for the Soboba Youth Council, uses an aerial map of the Soboba Cemetery to locate veterans’ gravesites for flag placing on May 28 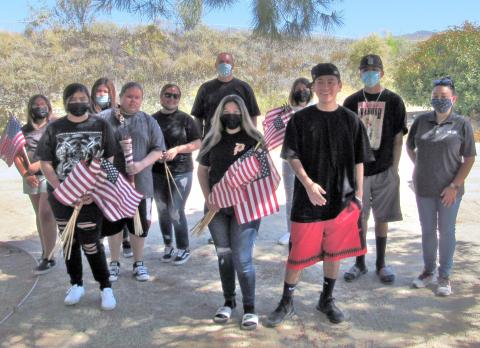 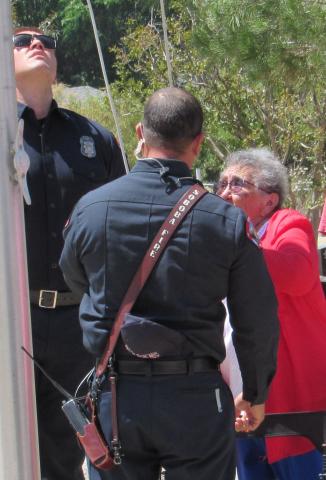 U.S. Women’s Air Force veteran Theresa Seaton is assisted by Soboba Firefighters in raising the American flag during a Memorial Day ceremony at Soboba Cemetery on May 31 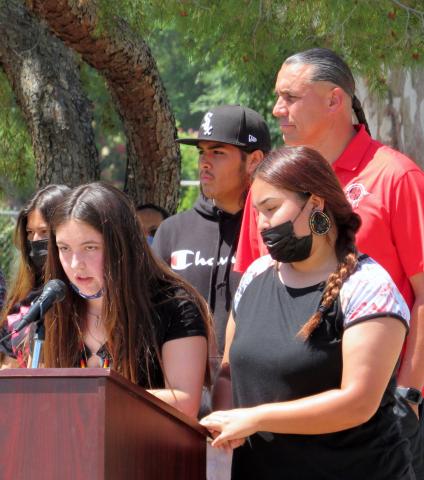 Emma Valenzuella, at the microphone, and Jocie Yepa, at the podium, took turns reading the last roll call, a military tradition that pays honor to deceased soldiers, during a Memorial Day ceremony at the Soboba Cemetery Veterans shrine on May 31