The Soboba Band of Luiseño Indians Youth Council wanted to be sure that military veterans buried at the Soboba Cemetery were properly honored for their service to America by hosting a Memorial Day Ceremony on May 25.

In preparation for the event, the youth spent the morning of May 21 placing flags on the graves of more than 50 veterans who are buried there. Because of the uncertainty if the annual event would be able to be held amid the coronavirus crisis, last minute cleaning and maintenance was entrusted to the Soboba Public Works Department. In past years, the youth have cleaned at the time they place flags.

Roo Briones said it’s important to her to participate in these activities because the future is up to all youth and they need to learn what to do and how to do it.

“It is good for the tribe to recognize our veterans for their contributions,” said Roo, 14.

Leah Lopez said that many veterans got injured or died in the process of serving our country and she feels it is a good thing that the tribe honors them.

Soboba Youth Council Co-coordinator Andy Silvas is also director of Soboba Parks and Recreation. His department and members of the Soboba Fire Department were at the cemetery to help youth locate the veterans’ graves and make sure the flags were secure at each one.

“This event is about those who have fallen in service to our country to secure the freedoms we have today,” Silvas said. “We can’t forget them.”

Prior to the Soboba Youth Council taking over the annual project about four years ago, Soboba Elder Marian Chacon said she and her family and friends volunteered their time to do it. She attended a youth council meeting about four years ago and suggested they take it over.

“I can’t tell you how proud I am of our youth,” Chacon said. “My mom and aunt started this many years ago and I used to help them. When they passed, I continued to do it on my own for about 10 or 15 years. I’m so glad the youth council is doing such a great job with it.”

Jeremiah Ramos was proud to personally place flags on his grandfathers’ graves – one who fought in World War I and the other in WWII. He said honoring the veterans with flags and the ceremony on Memorial Day shows the love and respect for veterans that they deserve.

“Our veterans need to be noticed for what they did in protecting our country,” said Iyana Briones, who has been the youth council’s chairwoman for three years. “They stood up for us and some gave their lives for us, so we need to show we care and that we noticed.”

About 50 people assembled around the stone and granite Veteran’s Memorial at the north end of the cemetery on May 25. The Rev. Earl Henley of St. Joseph Mission at Soboba offered prayers for the veterans, our nation and all its citizens.

A memorial roll call of veteran tribal veterans and non-tribal veterans buried at Soboba Cemetery was read by youth council members Roo Briones and Emma Organ. After the 15-minute ceremony, guests were invited to a drive-through brunch at the Sports Complex hosted by Soboba Youth Council. To-go boxes were filled and taken to each vehicle that arrived at the east side of the gymnasium.

In memory and honor of those who served: 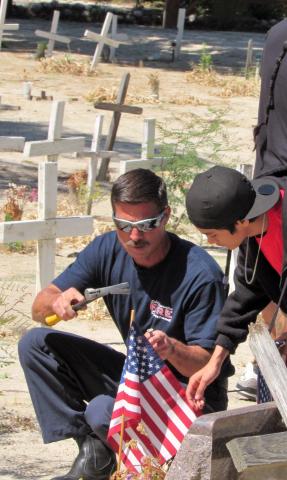 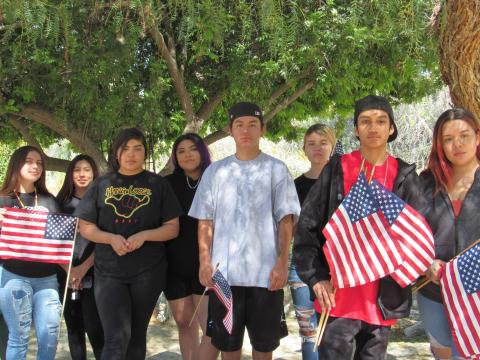 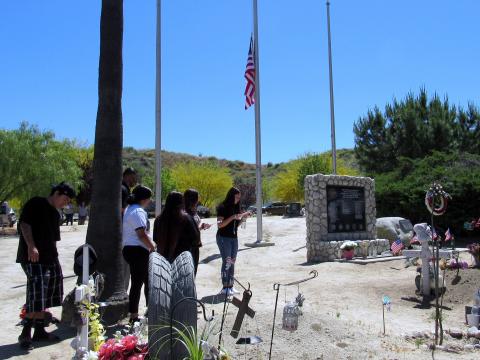 A Memorial Day Ceremony at Soboba Cemetery included a roll call of veterans buried there, read by Roo Briones and Emma Organ 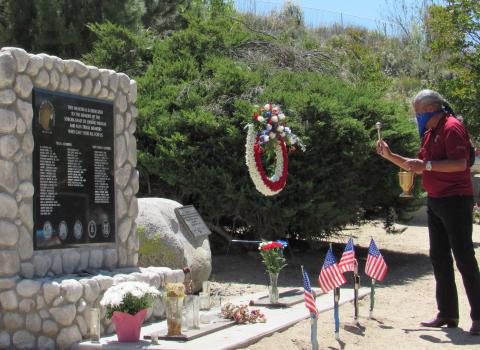 Deacon Andrew Orosco of St. Joseph Mission, adjacent to the Soboba Cemetery, gave a blessing at the Veteran’s Memorial during a Memorial Day Ceremony on May 25 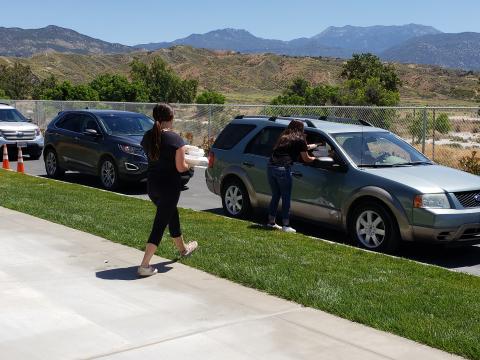 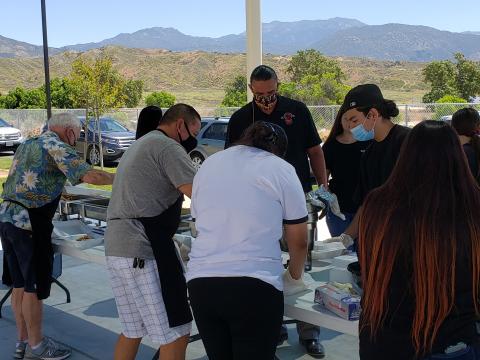 Members of the Soboba Youth Council helped organize a drive-through brunch for guests who had attended their Memorial Day Ceremony at the Soboba Cemetery at 11 a.m. on May 25