Staff and students at Soboba Tribal Preschool have been busy preparing for two important ceremonies as 19 kindergartners graduated from the program on June 14 and 32 preschoolers were deemed ready for kindergarten on June 15. Thursday's kindergarten ceremony began with a blessing from Steven Estrada, Chairman of the Santa Rosa Band of Cahuilla Indians. Wayne Nelson, whose daughter $eveela Nelson was among the graduates, led his singers in birdsongs. Director Dianne King then introduced each graduate, who entered the gym and walked across the stage to the strains of "Pomp and Circumstance," cheers from family members and popping of confetti cannons.

"No$úun lóoviq and a big thank you to all the parents and guardians who have supported our students throughout their preschool years," said King, who has been the school's director for nearly 10 years. "Today is the day that we send our students off on a new journey. With them we send confidence, determination and knowledge that they can achieve anything they set their minds to. They are ready for new challenges, bigger responsibilities and greater accomplishments."

Eight children in the full-day kindergarten class were students in the school's first program for two-year-olds that was started when the preschool was moved to its newly constructed building that currently houses a multipurpose room, a full-service kitchen and offices for Soboba Tribal TANF as well as the multi-classroom preschool.

"As parents and teachers, we put a lot of time and effort into getting them ready for this day and it's all about growth – and these children did a lot of that this year," King told the audience. "We have children that don't just want to be princesses anymore – they want to be architects. And we know that at least one or two of these kids sitting here will become tribal leaders."

King thanked the Soboba Tribal Council for allowing the school to expand to include kindergarten three years ago and to provide the necessary materials to ensure all children are well educated when they leave the school. They were also always encouraged to embrace their culture.

Tribal Intern Jill Miranda and Instructional Aide Antonia Venegas helped the children get ready for their special day. Venegas had the added interest of watching her own son, Samuel, receive his certificate of completion and watch him sing songs about being ready for first grade.

"All of my kids have been through this preschool – it's been great," Venegas said.

Graduates received special awards for outstanding reading and math skills and being a Homework Star, meaning they completed almost all the homework packets that were sent home to work on while away from school. Samuel was the top Homework Star for turning in every single packet during the school year.

Kindergarten teacher Cynthia Lee had several of the same students in her preschool class when she taught younger students and said she was impressed with their accomplishments. She said the children were great at learning and keeping this year's classroom promises to be responsible, be respectful and be a team.

"This class did more cooperative games than any other class I've taught," Lee said. "They are determined to make this world a better place. Many want to make a difference by doing a service job in the community when they grow up."

The students have expressed interest in becoming firefighters, nurses, doctors, dentists, teachers or working in law enforcement. Samuel Venegas originally stated he wanted to be a "dog catcher" so he could catch dogs and give them to people that don't have one but has since set his sights on becoming a policeman.

Each student had a dedicated table set up in the gym where family and friends could gather with the graduate after the ceremony to enjoy a catered lunch and desserts. The centerpiece was a photo of the child in cap and gown, a favorite reading book, a journal that spanned the school year, an autographed stuffed bear, samples of classwork in a laminated booklet and more.

Parent Renee Rhodes volunteers at the school every chance she gets. The mother of six was proud to watch her daughter, Candace Devore, graduate. (Sibling Lewis Devore was in the next day's Pre-K promotion.) Candace was singled out for her leadership skills and being an avid reader. She plans to follow in her mom's footsteps and become a nurse.

"This year she really took off (academically)," Rhodes said. "I love that the school teaches the children everything they need to know and that they get to hear about their culture and language. The teachers prepare them well to go into first grade."

Friday's Pre-Kindergarten promotion ceremony was a more informal ceremony for the largest class the school has ever had and King said 24 of the students are already enrolled for kindergarten at the site in the fall. Lead teacher Amanda Vallin and Instructional Aide Tanya Michles presented students with recognition awards and certificates.

"We haven't had twins attend the preschool before and this year we have two sets of twins (Gabriel and Gilbert Bentancourt and John and Logan Lopez)," King said.

After a blessing by Soboba Tribal Member Rosemary Morillo wishing the children and their families peace, love and honor, Frankie Morreo led his singers in birdsongs. He is the father of Pre-K student Kisil Morreo and kindergartner Su-Kutt Morreo. Dianne King thanked Tribal Council and tribal members for their support.

"I've never seen a community step up to focus on kids so much and make every decision with the kids in mind," she said. "We've come so far; I'm impressed and proud that everyone supported my vision. I feel blessed."

With a theme of "Soboba Stars" and a banner across the front of the stage that read "Our Future is Looking Bright" each of the students filled out a mini-biography that hung on a nearby wall with a photo of them in cap and gown. They named their best friends, favorite color and food and what they want to be when they grow up.

Much like the older students, the four- and five-year-olds are looking toward a future in service-based fields such as teaching, law enforcement, firefighting and healthcare. A few exceptions included Allea Alvarez who wants to be a ballerina and Aubrey Mazza who originally said she wanted to be a stay-at-home mom but changed her mind saying she'd rather be a superhero. To some people, that career choice is one and the same. 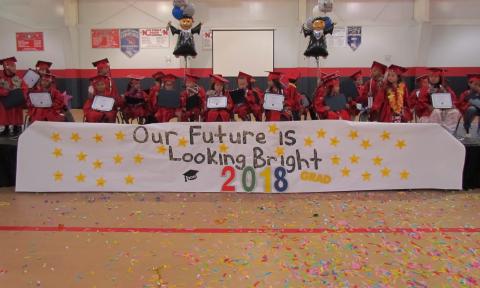 Pre-Kindergarten students from Soboba Tribal Preschool were officially promoted on June 15; three-quarters of the children have enrolled in kindergarten at the same site for fall 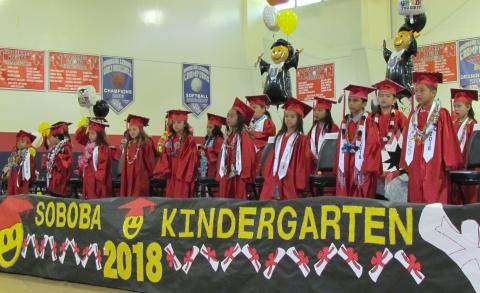 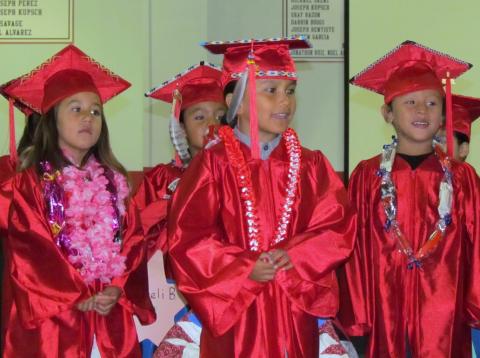 Pre-K students perform for family and friends at their promotion ceremony on June 15. From left, Nayeli Brittian, Anthony Torres (in back), Paa’ayat Arviso and Kane Calderon 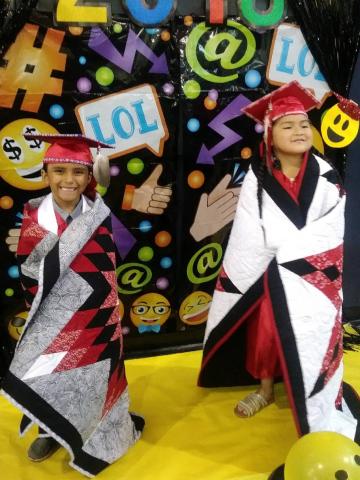 Kindergartners Ete’tish Suun Arviso, left and Tuupash Arivso take a photo opportunity with starburst quilts made by their great aunt Adela Morningstar Basquez Kolb and presented to them as graduation gifts 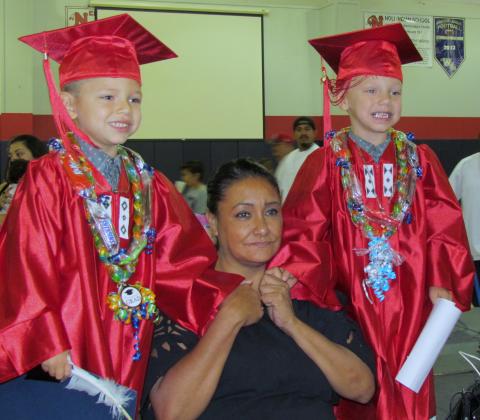 Twin brothers Gabriel and Gilbert Bentancourt are all smiles posing with their grandmother, Jessica Bentancourt, after being promoted to kindergarten on June 15 at the Soboba Sports Complex 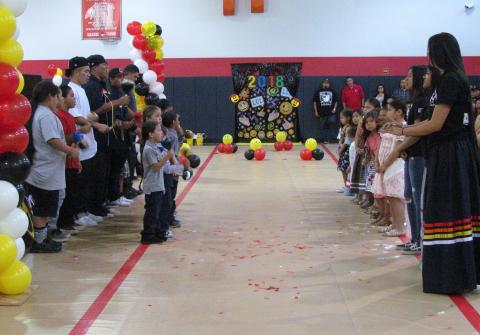 After shedding their caps and gowns, kindergarten students joined bird singers and dancers as part of the Class of 2018 graduation celebration