Soboba Tribal Member Graduates at Top of Her Class

Her passion guided her through culinary arts program ◆ By Mike Hiles

Nanisha Ramos fell in love with cooking and food at a young age and was only 14 when she knew she would pursue the culinary arts as a career path.

"I loved to watch my mom Anna Russell cook and she always allowed me to help whether it be breakfast, lunch or dinner," said Ramos, a member of the Soboba Band of Luiseño Indians. "She taught me everything I knew about cooking. When I'd get home from school I'd turn the Food Network on, write recipes down and get in the kitchen and try to make it. I cooked for whoever came to my house; I just always wanted other people's opinions besides my family." Ramos admits that sometimes her dishes were a hit and sometimes they missed but that's how she learned. Taking that love of learning a step further, she enrolled in the Riverside City College Culinary Academy and on April 12 she graduated as class valedictorian with a 4.0 grade point average.

"The Soboba Band of Luiseño Indians Higher Education Program scholarship helped financially, giving me the opportunity to truly focus on school and excel in culinary arts," she said.

She learned of the one-year program through her best friend, who encouraged her to enroll because she knew it was a great school from her cousin, who had graduated from the program.

"I enjoyed every minute I was there," said Ramos, 26. "I liked everything about school. I experienced a bit of everything and appreciate the process so much more, especially the cooks and chefs in the back of the house."

She was able to learn all about kitchen operations, such as preparing food cost reports each week to show how much profit was made. Practical training taught her how to make full entrees within minutes.

"I also liked that whenever I was put at a certain station I was able to create something of my own, giving me the ability to express myself," Ramos said. "My ability to multitask and work with time efficiency while maintaining the production of quality only got stronger and it's all because of the hands-on experience the academy offered me."

That doesn't mean she wasn't challenged through her class assignments. She said her biggest one came during a cold foods competition.

"We were put into groups of four and then given a theme (protein)," Ramos recalled. "We had to showcase a platter made with the protein – ours was duck – and three main items, two salads, two garnishes, a centerpiece and a cold sauce, all dipped in aspic (gelatin). Everything on the platter had to be edible or points would be deducted."

She said it took her group more than 33 hours of hard work and lots of patience to complete the assignment to their satisfaction.

"My team and I put our heart and soul into that whole weekend of cold foods," Ramos said. "It certainly paid off because we were awarded gold medals for our efforts and it was such a great feeling."

While she doesn't have a favorite dish, per se, she loves making fresh pasta and trying different flavor profiles. She said she learned how to cook several types of foods and has developed a new appreciation of international cuisine.

"The most important lesson I learned is to never give up your passion because you're scared of failure; just always enjoy what you love to do," said Ramos, of Redlands. "As my chef told me: 'Without failure there is no achievement' – that will forever stick with me."

Another quote she believes in is: "Whatever the mind can conceive and believe, the mind can achieve." She said that was always in the back of her mind throughout her time at the academy.

One day Ramos wants to be an executive chef, running her own restaurant.

"It's the end goal but I know I have a long way to go and it only gets harder from here," she said. "So, for now my plan is to work my way up in the kitchen to sous chef and see where the road takes me from there."

While she has no specific place in mind to work, she is looking forward to being in a kitchen where she can express herself and create delicious food.

Nanisha Ramos and her team earned gold medals during the cold foods platter competition at the Riverside City College Culinary Academy. The protein choice of duck was featured throughout the challenge which included entrees of Asian Duck Galentine, Teardrop Duck Terrine and Soy-lacquered Smoked Duck Breast plus a garnish of Duck Confit Tartlets with Lingonberry Jam 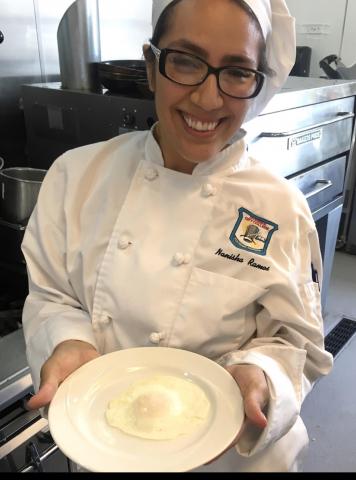