Discussing the importance of instilling pride of heritage of with newer families in the community, San Jacinto Unified School District Board President John Norman and Donald Marabella, organizer of the nonprofit Performing Arts Guild Alliance, had the idea to hold a heritage festival.

"Norman asked SJUSD staff to consider some heritage-themed instruction activities and that led to increasing the emphasis beyond the school walls into a community-invited experience," said Dawn Lawrence, the school district's communications and emergency preparedness coordinator.

The inaugural San Jacinto Heritage Festival will be from 3 to 8 p.m. on Oct. 21 at the Estudillo Mansion, 150 S. Dillon Ave. in San Jacinto and it will focus on the people that have made this valley what it is today. There is no admission fee to the mansion grounds for the festival and participants can bring their own food. However, no alcoholic beverages are allowed, per the grounds rules. There will be opportunities to purchase food, snacks, beverages and to enter some games such as a Dime Toss.

"The emphasis of this event is to celebrate the rich heritage of San Jacinto and share historical facts and highlight events and businesses that shaped our community," Norman said. "So many of our schools are named after historic persons from the valley and we want to ensure our students know why." A collaboration between SJUSD, the Soboba Band of Luiseño Indians, the San Jacinto Education Foundation and the Hemet/San Jacinto Valley Chamber of Commerce are making the event possible.

"Based upon the continued success of San Jacinto's 4th of July Parade, which begins at the San Jacinto Unified School District main office and has received increased support by the City of San Jacinto as finances have become more stable, Superintendent Diane Perez met with new City Manager Rob Johnson in late June to discuss the idea of a fall festival to repeat a community event," Lawrence explained. "Superintendent Perez reached out to Soboba to be included on the ground floor of planning, and the offer was readily accepted. At the first planning meeting, other organizations that champion heritage appreciation and community involvement eagerly committed to supporting the festival."

About 25 display booths will be featured on a "booth bingo" card that can be completed by visiting each booth. Prize opportunities will be available to those that turn in a bingo card. Food booths will include San Jacinto High School's FFA tri-tip sandwiches, Dogodog, popcorn, baked potatoes and some pre-packaged snack and candy options.

Soboba will also be supporting the event by having its Cultural Department set up a booth. Cultural Analyst Jessica Valdez and Programs Assistant Emily Lopez will be on hand to provide a display of cultural materials as well as some handouts pertaining to cultural resource preservation and traditional practices.

The G-rated movie "Babe, the Gallant Pig" will be shown on an outdoor screen at 6:15 p.m. and although there will be some tables and chairs set up on the lawn, families are encouraged to bring chairs or blankets to sue at the stage area to watch all the youth performances that will take place before the movie that will conclude the evening's stage entertainment.

Other features of the event will be recognition of businesses that have operated in the San Jacinto Valley for more than 25 years, mansion and museum tours and booths that will showcase the area's heritage along with family fun activities for attendees.

"Superintendent Perez and Board President Norman accepted the committee action item for perpetual street light pole banners and worked with a local vendor to create a banner for each of the three main hosts for the event as well as a general banner depicting October as San Jacinto Heritage Month," Lawrence said. "Installation began on Sept. 28 at the ‘Five Corners' intersection of Main Street, Ramona Boulevard and San Jacinto Avenue."

Several dignitaries have been invited to be recognized, including Dr. Vince Record who serves as SJUSD's Director of College and Career Readiness. He is the nephew of Clayton A. Record, namesake of Record Elementary. Invitations have also been made to the family of Janice Zinniker, a descendant of Juan Bautista De Anza for whom De Anza Elementary was named and family members of Megan Cope, former SJUSD Board member and namesake of Megan Cope Elementary.

Prior to the festival, the San Jacinto Rotary will host a Bocce Ball Tournament from 9 a.m. to 1 p.m. on the mansion's grounds. 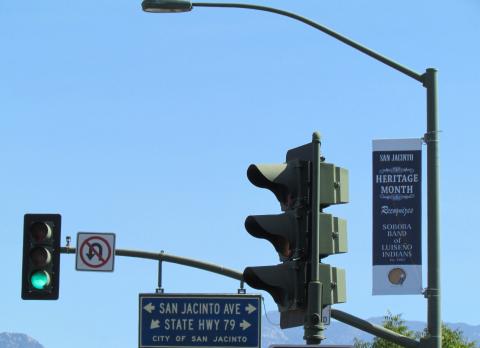 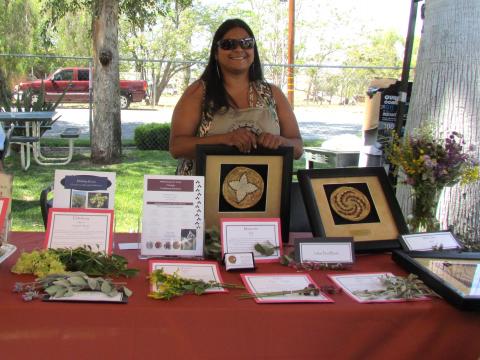 The Soboba Cultural Resource Department will have a booth at the inaugural San Jacinto Heritage Festival. Here, Cultural Program Manager Carrie Garcia is seen at a recent Earth Day Celebration at the Soboba Reservation