After a six-month renovation, the grounds of the Soboba Sports Complex were re-opened to tribal members for an Independence Day Celebration on July 5. A full day of activities included softball games, a horseshoe tournament, tug-of-war contests and lots of food to accompany the unveiling of the Parks and Recreation Department’s updated facilities.

Hundreds of visitors of all ages started arriving when the gates opened at 11 a.m. and stayed until after dark when a fireworks show was presented for their enjoyment. The spectacular skyward light show was based at Soboba’s solar energy farm, with a great view from the Sports Complex. Food vendors, artisans, bouncers and music by DJ Mike “Da Chef” were going strong throughout the day and there were contests such as a cake walk and prize raffles also held on an ongoing basis.

But the highlight of the day was seeing firsthand the upgraded facilities and new features. A Splash Pad water feature was constructed outside the fenced-in swimming pool area. Just under 100,000 square feet of new turf was laid throughout the parks area. Almost 60,000 square feet of asphalt was poured to provide new parking spaces and 98,000 square feet of existing parking was slurry sealed and striped.

The playground now boasts two tot lots and a peon and multipurpose area of 25,000 square feet was established. Shade covers were renovated and a new 40-foot wide gazebo was added. Wood trellis shade areas at the playground and Splash Pad areas were added above permanent tables and benches for the comfort of families watching their children play.

There are now two snack bars with restrooms located behind home plate at both ball fields. One is completely new and the other was renovated to match.

Jacob Briones, who was at Friday’s event with fellow Soboba Fire Department colleagues, said everyone he had talked to seemed to like the new look.

One of the four teams playing softball during the afternoon was Savage Crew, led by team manager Frankie Morreo. He said everything he had seen so far looked really nice and he felt the new features would attract a lot more people to the park.

Parks and Recreation Director Andy Silvas, who played on one of the softball teams, said he had received a lot of encouraging feedback in the days since the relaunch.

Ricardo Macias, Lead Recreation Aide for Soboba Parks and Recreation, said it was hard to pick just one thing as the best addition.

“I like the fact that it wasn’t expanded to cater to just one age group – the design touches on everybody, with something for everyone; it’s very diverse and family oriented,” he said. “And it looks good, too.”

A designated horseshoe pit has been constructed next to the main parking lot and about 10 teams competed against each other during the re-opening day festivities. A $500 prize went to the tournament’s winning team.

Lucille Briones was at the event with her sister (Freda Miranda) and seven of her eight grandchildren, ranging in age from 5 to 17.

“I think everyone is enjoying it here,” said Briones, who arrived at 1 p.m. and planned to stay for the fireworks show. “They were all super excited about the pool reopening.”

The Sports Complex had a complete overhaul in 1999 and has served the community well with its two baseball fields, outdoor basketball court, pool, playground and gymnasium. But the new features will provide more shade, more grassy areas and designated playgrounds for younger and older children to best meet the needs of a growing family-oriented community.

The new design was approved in November and construction began in January. Workers experienced some major delays due to inclement weather, especially during February.

“We did delete some smaller items in order to keep us within budget but it’s pretty much what we wanted,” said Tribal Council Vice Chairman Isaiah Vivanco, who was also involved with the 1999 renovation. “Not only did it meet our expectations, it exceeded them. I spoke to many tribal members at Friday’s event and the overwhelming response was positive. It is a great addition to our community.”

Soboba Sports Complex hours are Monday through Thursday 8 a.m. to 8 p.m. with gates being locked at 9 p.m. The pool will be open Mondays and Wednesdays from 11 a.m. to 5 p.m. and Tuesdays and Thursdays from 1 to 5 p.m. The Splash Pad is open every day of the week from 9 a.m. to 8 p.m. All times are subject to change.

The new Splash Pad was an instant hit when the Soboba Sports Complex re-opened on July 5, after a six-month renovation project 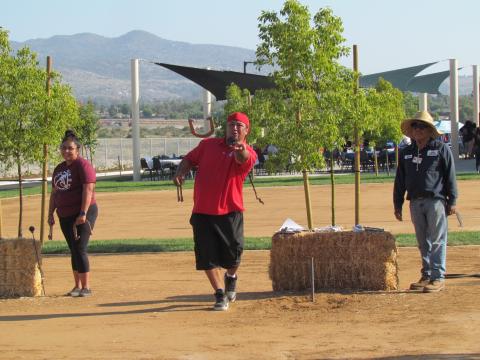 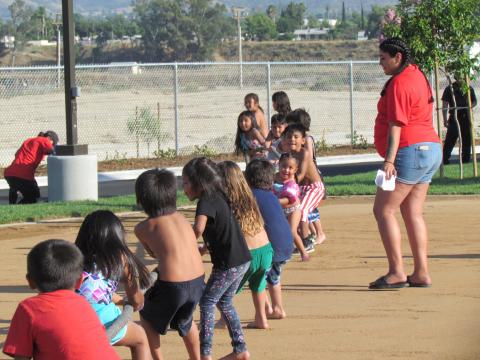 Several age groups competed in tug-of-war contests during the reopening of the Soboba Sports Complex facilities on July 5, where a Tribal Community Independence Day Celebration was also held 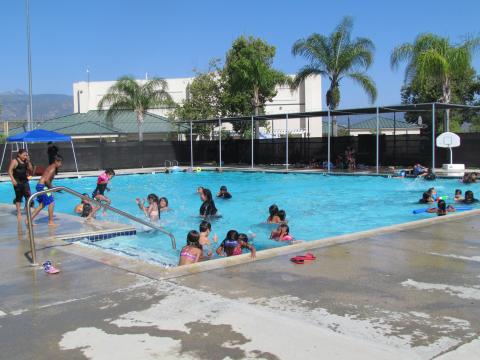