When the Soboba BBC team took to the Soboba Sports Complex ballfield for the N.I.A.A. (National Indian Athletics Association) Fastpitch Softball Tournament, it was about more than trying to win a game. The players were carrying on a legacy for the sport that began with formation of the original Soboba BBC team in 1996.

"We were all family and friends from the Soboba Indian Reservation," said Isaiah Vivanco, who currently serves as Vice Chairman for the Soboba Band of Luiseño Indians Tribal Council. "We played together until our final tournament in 2012, the tenth anniversary tourney of fallen teammate Eric Post #3."

Post had been an original member who had passed away in a motorcycle accident in 2002. Vivanco said that members who continued to play as they got older formed the So Cal Tribes which was comprised of a combination of players from Soboba BBC and RezMen.

"Both teams played the same style of ball so the merger was an easy one that still lives on today," Vivanco said. "We would go on to win the NIAA Tournament two times."

This year, Vivanco's son Jericho said he wanted to put a team together to participate.

"It seemed like the perfect time to add a few of our longtime players and coaches to not only help the boys out but teach them to play the game the way we were all taught: play hard giving 110 percent at all times, respect the game and respect your opponents," said Vivanco, who was pitcher for the original team. "This was really a team that most original members looked forward to – when our sons would revitalize the BBC team."

The younger team members had not played much together prior to the tournament but had played on teams when there were empty roster spots, but none of them really had a team of their own. The young BBCs practiced once or twice a week. All the players were either Soboba Tribal Members or residents of the reservation except for two longtime friends that had played for the original team.

"There were no tryouts; if they wanted to play, they were welcomed as long as they were willing to listen and learn," Vivanco said. "It's a really neat cycle that the kids that grew up watching their dads, uncles and cousins play softball now have those same guys watching them play and carry on the team's name."

Richie Lopez, a Torres Martinez Desert Cahuilla Indians Tribal Member who resides at the Soboba Reservation, helped the boys form the team and made sure there was order in the dugout during the tournament. He recruited Vivanco to help coach them at third base and Darryl Silvas, a Soboba Tribal Member, did not hesitate to help out when asked to serve as first base coach.

Along with original BBC members Vivanco, Silvas and Lopez, team veterans who assisted this year's team were Steve Lopez and Jason Cozart from Soboba and Ray Rodriguez and Dustin Blanton from the Rincon Band of Luiseño Indians.

The youth who restarted the team were Ajay Parcero, Jericho Vivanco, Benny Helms IV, Junior Medina, Devin Devore, Delbert Briones and John Valdez from Soboba and Deven Lopez from Torres Martinez, who is a Soboba resident.

The team will be entering two memorial tournaments within the next couple of weeks, both at the Pala Band of Mission Indians Reservation near Fallbrook. Vivanco said the team will see more action next year, possibly playing in about 10 tournaments on different reservations throughout Southern California.

The team's record at this year's N.I.A.A. Tournament was two wins and two losses during the timed games of 90 minutes, rather than a set amount of innings. Their first game was against the Oklahoma Natives who ended in fourth place; the Soboba BBCs beat them 4-0. Their second game was against the five-time defending champion and eventual second-place finisher: the Westbank Cardinals from British Columbia, Canada.

"The boys were a little intimidated but played awesome and never gave up in a 7-2 loss," Vivanco said. "Our third game was against Thrown Together. They started a very good pitcher but the boys were able to scratch out two runs for a 2-0 win. Our fourth and final game was against the Morongo Athletics, a team that would finish third in the tournament. We lost 6-2, ending our tournament play. So, we beat the fourth-place team and our losses were to the second- and third-place teams."

Ten women's teams played and defending champs Morongo Women's took the first-place prize of $3,000 and had its pitcher Carrie Moone named MVP. Soboba Women's came in second and received $2,000 plus three all-tourneys and $250 for MVP Shy Helms. REZilience got $1,000 and two all-tourneys for its third-place finish and the Misfits, who came in fourth, got $500 and two all-tourneys.

Geneva Mojado was pitcher for the Soboba Women's team and also serves as a coordinator for the annual tournament. She said a few more teams competed this year and the weather was very cooperative. A standout for her was that the Pala Braves finally beating the Canadian team.

Final games of the three-day tournament were held in the afternoon of Sept. 17.

"The highlight of the weekend was watching all of our boys on the field proudly wearing their new Soboba BBC jerseys as well as getting phone calls from many original players asking what time the boys played so they could come out and support them," Vivanco said. "We had told the boys they could use the team name if they played hard, got dirty and gave it their all – they didn't let us down. Their spirit and willingness to learn was more then we could have asked for. The older players and coaches had 20-plus years of tips to share with the youth before, during and after every game and they took it all in. I can't wait to see how they progress in the years to come." 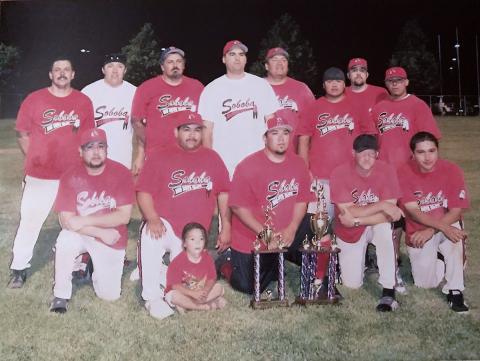 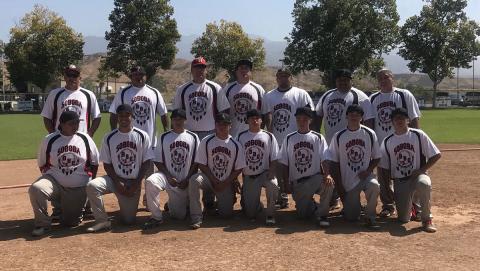 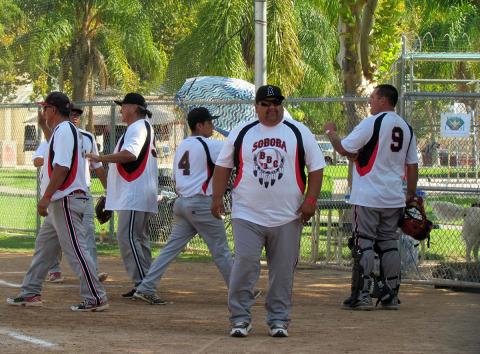 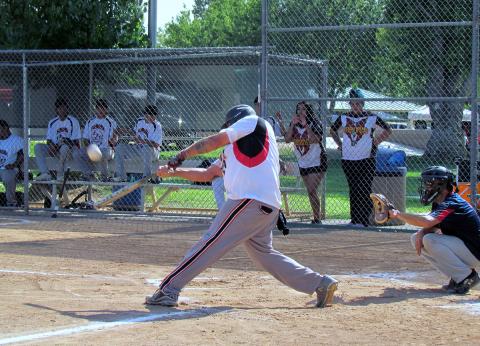 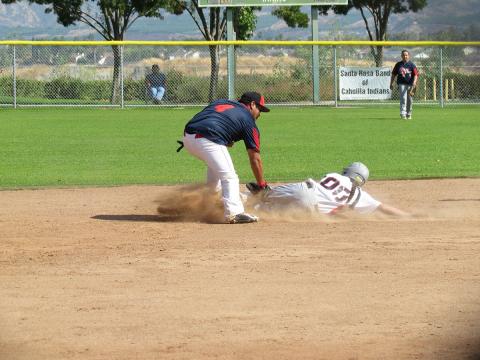 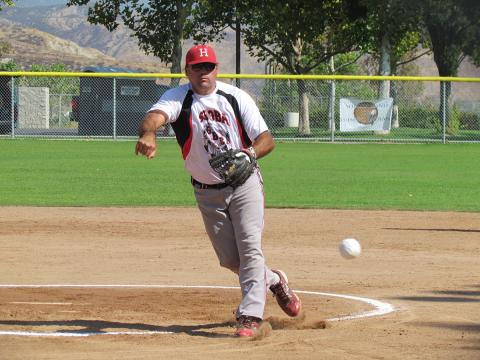 A Soboba BBC pitcher throws to a player from Thrown Together on Sept. 16 during the 2017 Fast Pitch Softball Tournament which concluded on Sept. 17