They sent thank-you letters to soldiers ◆ By Mike Hiles

The Soboba Tribal Preschool kindergarten class of 19 students wrote letters to American veterans through a program called Operation Gratitude in Chatsworth. In addition, the pre-kindergarten afternoon class signed a letter with their names to add to the older students' offerings.

Teacher Cindy Lee said the five- and six-year-old students in her kindergarten class copied the words: "Dear Veteran, Thank you for keeping us safe." They signed their names and added a picture of their family, flags, their pets of a picture of themselves happy to be safe in our country.

"The kindergarten students have a unit in Social studies in which they learn about American holidays and symbols," Lee explained. "We read the text and discussed who is a veteran and what they have done for the country. I then explained to them that sometimes leaders of different countries do not get along and then they hurt other people. Our veterans fight to keep our country safe so that people do not get hurt in our country and other countries. They keep our country free so that we can have choices and opportunities to do things we like to do such as go to Disneyland, or Chuck E Cheese, or even just go to school."

Lee said the students also learned that many children in other countries do not get to attend school because they must work instead.

"I explained to the children that sometimes the soldiers fight really hard to keep us safe and then when they come home people do not always say thank you and it makes them sad," she said. "I asked them if they would like to tell them thank you and draw a picture to make them happy. The children then are inspired to copy the words from the whiteboard and add their own pictures. We discuss that Veteran's Day is a day to honor these soldiers and if we see them while we are eating out or shopping we can thank them for their service."

Lee said that the children are taught about respecting America every single day as they all participate in the Pledge of Allegiance.

"We explain that our veterans did their job to keep our country safe and that our job is to respect the soldiers by standing for our flag when we hear the pledge," she said. "The students enjoy taking turns being the flagholder of the day."

A letter-writing project was done the previous year after a parent brought in a request for kindergartners to write letters that were then given to a local Marine who shared them with his troops. This year, the project was incorporated into the kindergarten curriculum with pre-k and preschool students being invited to join.

"The kindergartners used the letters to fulfill their writing assignment and extend their Social Studies unit on American holidays beyond just writing in their workbooks," Lee said. "They were especially excited as a few weeks earlier Ete'tish Suun Arviso had invited his cousin, Frank Red-Bow Basquez Gallerito, who is currently serving in the military to come for our class's Show and Tell."

"The students asked him questions such as did he have to carry a real gun and if he liked being a soldier," Lee said. "$eevela Nelson showed him her picture and he helped her to write her name."

Melissa Arviso, parent of a preschooler, stated: "It is important that our youth learn about Veteran's Day so they know that there are those who are and were willing to risk their own lives to protect ours. We owe so much to all veterans past and present for their service as our warriors, they deserve our admirations. We may not know them all but we owe all of them. Even though we cannot personally thank each of them, we can do other things to show our appreciation. I think John F. Kennedy said it best when he said, ‘as we express our gratitude, we must never forget that the highest appreciation is not to utter words but to live by them.'"

Soboba Tribal Preschool Director Dianne King is married to a Marine Corps veteran and speaks from the heart when she says, "The children need to know that Veteran's Day is important and not just a day off from school, but a day to honor the men and women who have served."

Lee said that as a teacher she tries to find something her students can relate to at their age such as knowing what a soldier is and what he or she does for a job.

"Children know what it means to be safe and they do not like to be hurt," she said. "They all like to have choices to do what they like and go to fun places. If we did not have soldiers keeping us safe, then we would not have these choices and we would all be very sad. When our students hear other children do not get to attend school or are not able to go places they enjoy like Disneyland or even McDonalds they feel things are not fair and they become concerned. Kindergartners are at the age when they have a strong need for things to be fair. They have learned empathy so when things are not fair, they want to do something to make it better." 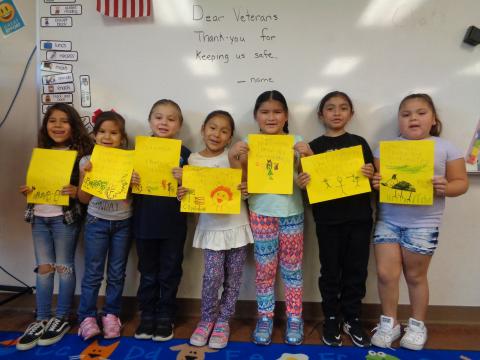 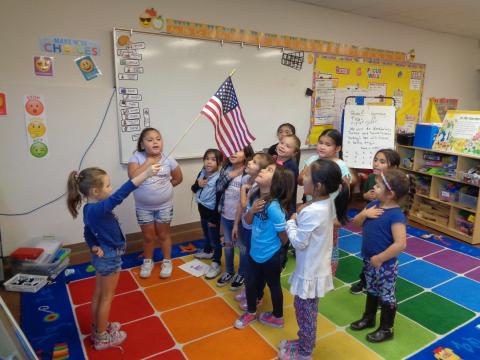 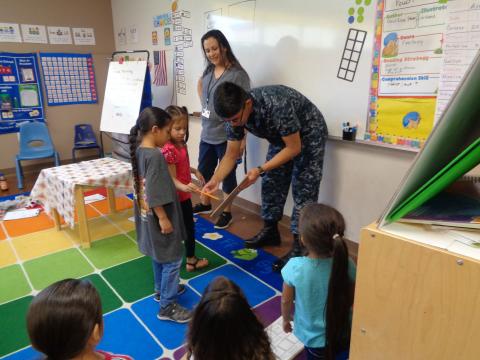 Frank Red-Bow Basquez Gallerito of the U.S. Navy visits the kindergarten class of his cousin Eti’tish Suun Arviso for a recent Show and Tell 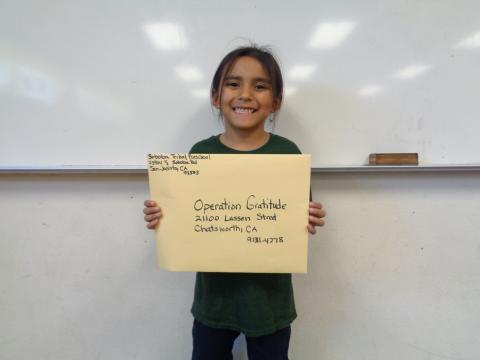 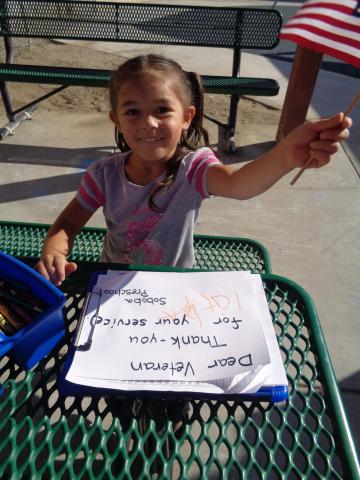 Cinthia Perez, 4, finished signing her name and waves a flag to honor veterans