When like minds join to launch a promising project, it doesn't take long for it to come to a successful fruition. That is what happened with the coordination of the first Indigenous Bowl that attracted Native American football players from across the country to the Soboba Band of Luiseño Indians reservation near San Jacinto.

"Bennae reached out to us because she knows the tribe is into sports and asked me to sit on the board (for 7G)," Vivanco said. "Other tribes have donated to help with the food. We put in our own time to make sure all goes smoothly while the players are housed here."

For two days, 38 players gathered at The Oaks to share their culture and backgrounds before facing each other on the football field at San Diego Mesa College on July 7. Two all-star teams – Chaam and Tso Ya Ha – were comprised of top players who had just graduated from high school and been recommended by their coaches.

"The purpose of the boys spending time together at Soboba was not just to offer some last-minute training but to help them connect and share their cultures with each other," said Calac, of San Diego. "The highlight for me is making the intangible tangible for these native athletes and their families and to bring next-level opportunities through the efforts of the 7G Foundation."

On July 5, after settling in and having dinner, the players took part in a football combine, an event where athletes are put through tests to showcase their athletic ability. July 6 found the players on the football field at The Oaks for more than four hours, starting at 7 a.m. to learn the various plays and get to know their assigned teammates.

A lunch at Soboba's multipurpose center included presentations from former NFL players Sherman Cocroft and Travis Davis who motivated the participants to set their goals on more than the next game, encouraging them to concentrate on their higher education.

"Everybody has certain talents – some may have 10 talents," said Davis, a defensive back with the Jacksonville Jaguars and Pittsburgh Steeler in the 1990s. "Bring all your talents to the game and always be ready – you never know when your opportunity is going to come."

Soboba tribal member Benny Helms IV, a standout at San Jacinto High School, is headed to Humboldt State University to play football but also to earn a degree. He was chosen to be part of team Chaam, which means "us" in his Luiseño language.

He had played in all-star games before but this was his first experience playing in an all-native game and he was excited for the opportunity. Another plus was that his cousins, Jayden Helms and Dakota Helms, came from Fresno to visit family and play in the inaugural Indigenous Bowl.

Twin brothers Jayden and Dakota are headed to Ft. Lewis College in Colorado, which has a Division 2 football team.

"We've already been accepted as students and have spots on the team," said Dakota Helms, 19.

Another cousin, Shane Helms, was Chaam's head coach. Benny Helms, 17, said it was going to be the first time all three Helmses have been on the same field together and the first time they've had their cousin as a coach.

"This is a once-in-a-lifetime opportunity; I never got to coach any of their teams before," said Helms, who coached at West Valley High School for 10 years, San Jacinto Eagles Youth Football for about eight years, Hamilton High for a year and has been with the SoCal Coyotes for about three years as VP of Football Operations. He also serves as executive director of the Native Athletic Institute that was involved with the Indigenous Bowl event.

Other Soboba tribal members on team Chaam were Wayne Garcia and Junior Medina. Coach Helms said the main purpose was to let the kids have fun; some were visiting California for the first time.

"It's really about different cultures and tribes coming together," he said. "Their issues might not be the same but hopefully they can create a bond since all have the same goal of playing together in this game."

He said being all-star players they have already put in the time and work to get to this point and 7G Foundation had some tribes help with funding to get the players there.

"Once they got here, everything was taken care of for them," Helms said.

Tribal Council Chairman Scott Cozart welcomed the young athletes from seven states and recalled playing in a Riverside County all-star football game back when he was in high school and how the weather was pretty hot like it was for these young men.

"We had two days of practice in Palm Springs in mid-August," Cozart said. "So stay hydrated out there and good luck."

Soboba Tribal Administrator and tribal member Michael Castello described to the elite players from across the nation how he used sports to get to college but that it was his education that led to him working for his tribe in such an important capacity.

"Sports was always a big part of my life and even though I wasn't always the biggest or strongest, the harder I worked the better I got," Castello said. "College is an eye-opening experience and it opened my eyes to a whole different world."

He said being from a small town and growing up on the reservation didn't afford many opportunities for young people and sports gave him the avenue to be able to get to college but it took dedication, hard work and preparation to continue. He said many distractions led him down the wrong paths but with the support of his family, he was able to get back on track before it was too late.

"The hardest part is just showing up," Castello said. "It is so easy to think it's okay to miss one practice or one class but it isn't – you need to show up."

When the final day of training was done at Soboba, the players were treated to a pool party. But before heading out they got to hear and see the bird singers and dancers that are part of the local tribes' heritage. Then Keland Bearpaw of Euchiee, Oklahoma shared a hymn in his native language.

Calac said that after the game, the feedback from players was positive regardless of the final score. The athletes talked about renewed visions, the chance of playing one more time, making new friends, being inspired to continue their education and learning more about their own culture and tribe.

"We are the first people and we have talent and gifts that come from our core, our culture and our identity," said Calac, who is Luiseño, from the Pauma Band of Mission Indians. "We are supported by our people and we will continue to use the success of sports and education." 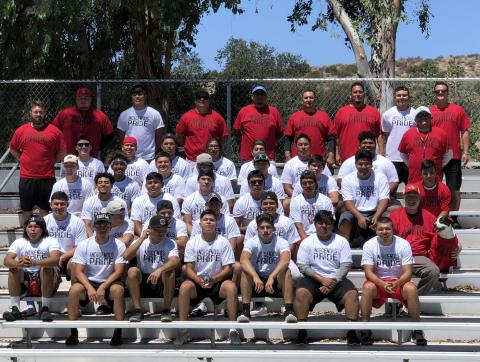 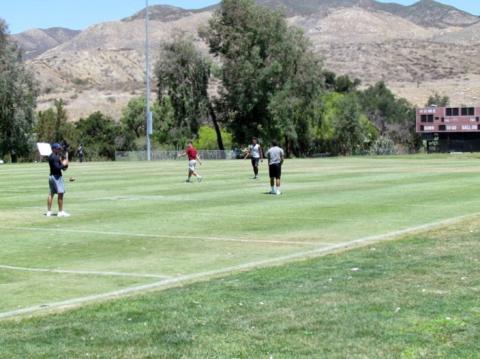 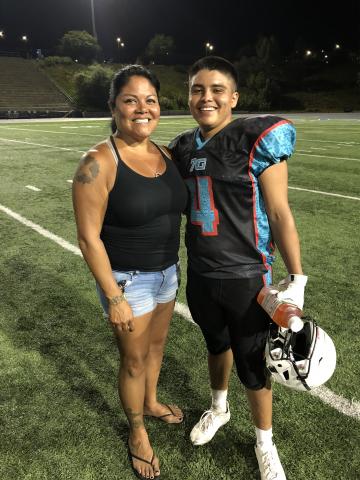 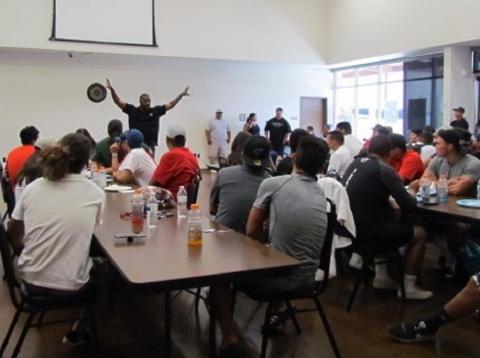 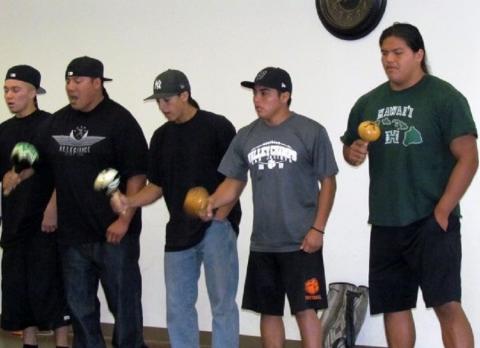