Soboba Names Its First Firefighter Of The Year

Xzavier Avalos has the distinction of being the first recipient of the Soboba Fire Department Chief Howard Maxcy Sr. Firefighter of the Year award. The accolade was set in motion when the Soboba Band of Luiseño Indians opened its state-of-the-art fire station in June of 2019.

The award’s criteria are an ongoing improvement of skills, good attitude, positive impact on fellow crew members and a willingness to go above and beyond. Chief Glenn Patterson said Avalos stood out in many ways throughout the year.

“He is always willing to step up when we need him, signed up for extra-curricular classes, got qualified as a Fireline Paramedic and took assignments in Northern California and even provided haircuts to crew members during the pandemic shutdown,” Patterson said. “He’s shown significant improvement in skill sets, is always happy to be here and walks in with a smile on his face.”

Firefighter/Paramedic Avalos said cutting hair is like a hobby for him and he learned from his mother, who owns a hair salon and barbershop in Colorado. She also teaches cosmetology classes.

“I watched her ever since I was a little kid,” he said. “Ever since COVID, I’ve cut the hair for many friends and family members.”

Avalos, 25, lived in Colorado for many years before returning to California after high school to live with – and learn from – family members that work for CalFire. He knew that was the direction he wanted to take for his own career and has been grateful for the opportunity to grow with the young Soboba Fire Department.

“I get to learn from different people from different areas and from all levels of experience,” he said. “The work environment is great and I get to work with all the latest technology, take classes that are offered and get tips from everyone around me. I have learned something from every single person here. And I see something new every day.”

Avalos just completed a swift water rescue class, one of many specialty classes available. He said he was taught from a very young age that education is very important and is always open to studying new things.

He also enjoys getting to know Tribal Members who live at the Soboba Reservation, some who are also employed at Soboba Fire. He said it’s like a small-town environment and he enjoys getting recognized by its residents.

“I get to learn about the history and culture of Soboba, which is an honor,” Avalos, of Hemet, said.

The station employs 22 staff with seven Fire Captains who each submitted a nomination. Howard Maxcy Jr. is one of those captains. The award was named in honor of his father, who served as Soboba Fire Department’s first Fire Chief.

Howard “Poncho” Maxcy Sr. was an integral part of Soboba starting its own fire department in 2014. His leadership and expertise created a solid foundation to build upon. He was hired with the California Department of Forestry (CDF) in April 1969. During the 1990s, he assisted several Tribes in establishing or expanding their fire departments.

Howard Sr., who passed away in February, exemplified caring service to others and was a wonderful mentor to the employees. Even though he was busy building reservation fire departments, he always stayed active in the fire service, serving on many boards.

In addition to Avalos having his name engraved on the perpetual plaque, he also received a recognition certificate and a $150 gift card. Avalos said he felt honored and privileged to be singled out for the award but thought all crew members were just as deserving. 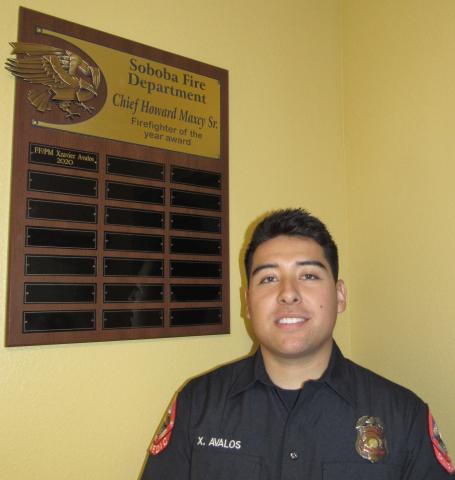 Xzavier Avalos, of Hemet, is the first recipient of the Soboba Fire Department Chief Howard Maxcy Sr. Firefighter of the Year award 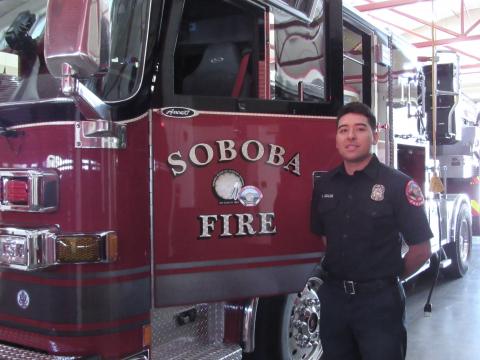