A special Movie Night was recently held at the Soboba Sports Complex with a guest appearance from Native American actor and Nike N7 Ambassador Martin Sensmeier. About 150 people came for the screening of "The Magnificent 7" after a Staff vs. Youth basketball game.

Before the movie was shown on the large projection screen inside the gymnasium, Sensmeier spoke about how the filming went, some insight on some of his scenes and who he worked with. The 2016 remake of a 1960 classic starred Denzel Washington, Chris Pratt and Ethan Hawke, among others. Sensmeier's character was Red Harvest.

"He talked about how he mainly used his father, as well as a few professional athletes, as inspiration to work hard in life and get to where he is today," said Soboba tribal member Steve Lopez.

Sensmeier, 31, mentioned how he wanted to honor his heritage by using some of his native language (Tlingit, Koyukon-Athabascan) in the movie, which he did. He also was given the freedom to use his own style of war paint.

Ricardo Macias, who is a recreation aide at the sports complex, personally knows and invited Sensmeier to Soboba.

"Being a Nike N7 Ambassador means being a voice, role model and somebody youth can relate to because he went through many barriers that Native American youth today are challenged with," Macias said. "They can see themselves in a person like Martin."

Sensmeier played on the Staff basketball team, which was beat by the Youth 86-74.

"Martin is all about being involved with the youth and participating with them as well," Macias said. "He spoke to our youth about wellness and living a healthy lifestyle and striving to be the best version of themselves that they can be."

The Pechanga Youth Department brought about 10 youth to the event that was combined with one of the twice-monthly Soboba Tribal TANF Teen Nights, which are attended by Soboba Youth Council members. The regular events, held at various locations, provide workshops on leadership, prevention, culture, higher education and health and wellness.

"During the basketball game the staff had youth from 9 to 13 years old playing with them on their team, which was exciting and fun to watch," said Jennifer DeVore-Garcia, Activities Director for Soboba Parks and Recreation. "Crystal DeVore 10, Arron DeVore 9, Ashlyn Russell 9 and Mexcel Garcia 9 were among the players. The youth team consisted of 14- to 19-year-old players. This event was held to get all tribal communities together."

Sensmeier sat with different people throughout the movie, took multiple pictures with his fans and answered questions throughout the night. Macias said when Martin's first movie scene came on the screen everybody clapped loudly.

"It was nice to see our community give him that kind of acknowledgement. Martin is a very humble man and was very thankful for that reception," Macias said.

Third-grader Ashlyn Russell, 9, said she enjoyed playing in the basketball game with her cousins and meeting Sensmeier.

"I liked when he spoke in his own language," she said.

Francisca Rivera is a sixth-grader at Noli Indian School and she attended the special event because she wanted to meet a Native American actor. She liked that he played in the basketball game alongside everyone else.

"I liked that he said natives should be heard," said Rivera, 11.

Lopez said the organizers received great feedback from those who attended.

"The kids really had their eyes opened," he said. 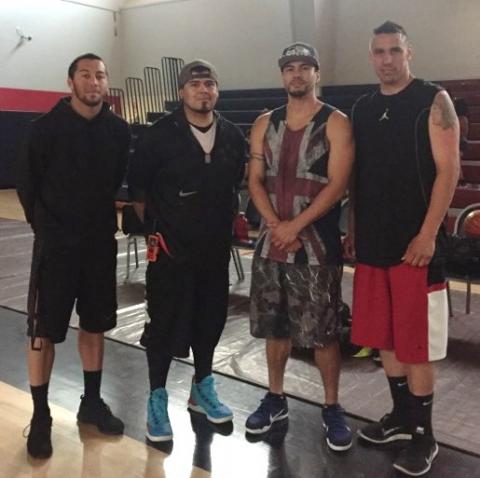 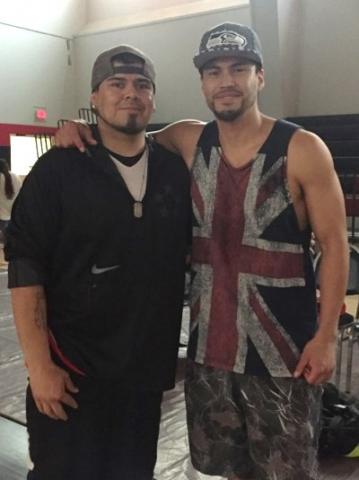 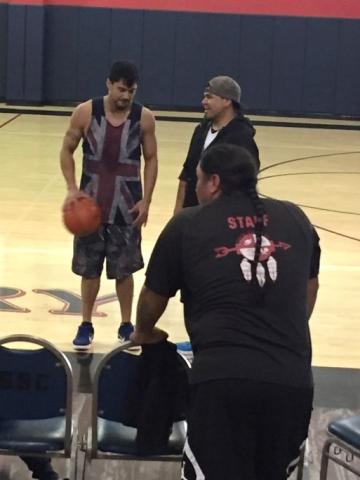 Native American actor Martin Sensmeier, left, and Ricardo Macias chat at the start of the Staff vs. Youth basketball game that took place before a screening of “The Magnificent 7”