To the 19 kindergarten students attending Soboba Tribal Preschool, age is just a number. In celebration of reaching 100 days of instruction, the five- and six-year-olds were asked to dress up like a 100-year-old person. With sprayed-on gray hair and walking canes in hand, the "centenarians" made their way through creative centers that reinforced the number of 100.

Kindergarten teacher Cindy Lee said the curriculum standards require students to be able to count by ones and tens by the time they start first grade. With 180 days of instruction, the full-day class is more than halfway through their school year.

During group time, the students named 100 words and identified if it was a noun or verb. They also were tasked with bringing a mystery collection bag from home containing 100 items. Using clues they came up with, classmates had fun trying to guess what was inside.

Nadillyn Mendoza filled her bag with 100 pennies and students learned that 100 pennies equals one dollar. Ete'tish Suun Arviso provided the clues that his items were red and could be eaten - 100 miniature candy canes. Analicia Placencia's clues stumped everyone saying they were organic, black and white, could be eaten and were the name of a band. She opened her bag to reveal 100 black-eyed peas.

One activity center had the children creating a monster by giving it 100 additions, such as 10 red legs and 10 blue ears, requiring students to follow directions and count each item they drew to 10.

Stringing a Fruit Loops necklace first required the child to fill up each square on a card as they counted out 100 cereal circles. Balancing 100 red Solo cups as they created a pyramid met a STEM standard as well as counting to see how many they could get together before the cup structure collapsed.

When asked who the oldest person is they know, Joseph Arres said he has a cousin who is 50 while Noyáaykit Silvas said her sister is almost 12.

Lee, along with Instructional Aides Antonio Briones and Melissa Arviso, interacted with the students throughout each center as they were encouraged to count, color and create. At the end of the day, kindergarten students proved themselves to be 100 days smarter!

Making learning fun is something the Soboba Tribal Preschool does very well. Since mid-January, a six-week nutrition class has been presented by Riverside County Public Health's Nutrition Education and Obesity Prevention program. Each Wednesday, representatives bring puppets and activities for the kids. Two sessions held in the building's multipurpose room make it possible for all students to attend.

"They come dressed as fruits and vegetables and have an interactive exercise program to music; it's very cute," said preschool director Dianne King. "The same instructors come each week. Hosea Jones, Health Education Assistant II, is the lead instructor."

The children have been given fruit bookmarkers, brochures and a plate with partitions for nutritional guidelines. They have learned a lot, such as how to tell fruits and vegetables apart and which ones grow on trees and which ones grow in the ground.

"The program has been great," King said. "The children get excited when they know the 'fruit and veggie people' will be coming."

King added that the program has received a lot of support from parents and staff. With two new cooks at the preschool, the kitchen staff has been reinforcing the lessons by making vegetables "kid friendly" and flavorful.

The nutrition and fitness lessons have been a great tie-in to the 100the day of school for the kindergartners as they learned 10 tips to a great (and nutritionally balanced) plate and 10 tips for becoming more active as a family. It's obvious that whatever the students learn at school can be taken home where it can be supported and encouraged. 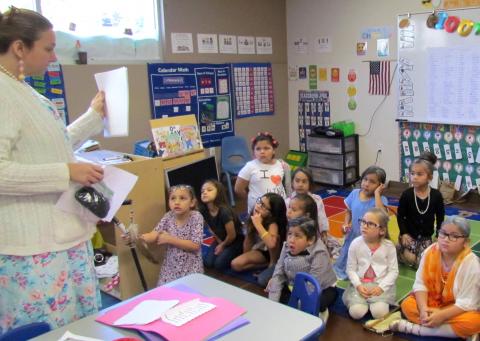 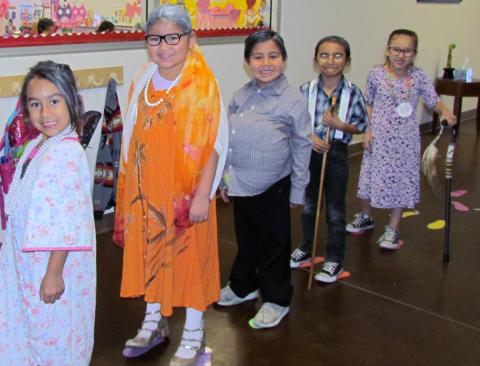 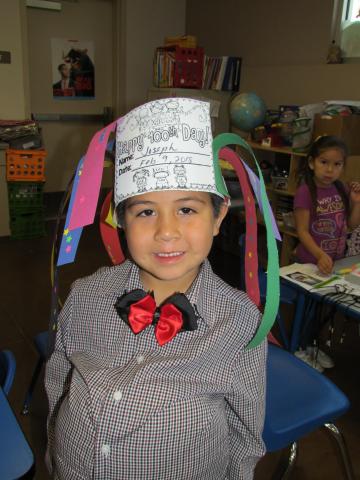 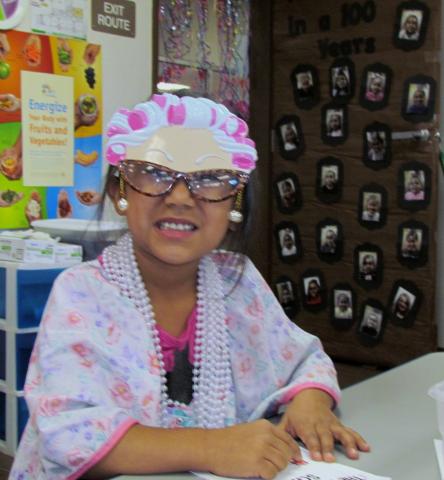 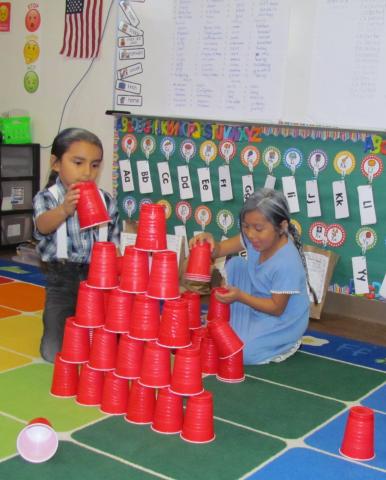 Soboba kindergartners stack up 100 plastic cups as part of their classroom's celebration of 100 days of instruction on Feb. 9 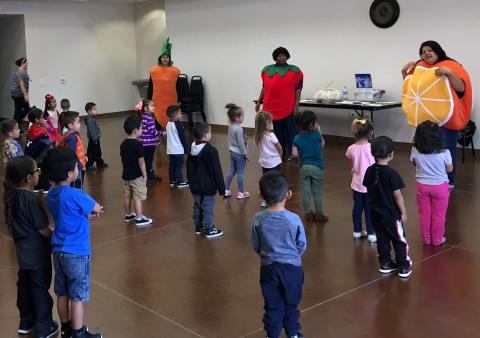 Soboba Preschool students are learning about nutrition and get weekly visits from the "fruit and veggie people." In the center, dressed as a strawberry, is lead instructor Hosea Jones