The California Fee-to-Trust Consortium is a workgroup of California Tribes and Bureau of Indian Affairs personnel who, in 1998, began work to streamline the process by which Tribes can secure landholdings that are protected by trust status.

When California-based Tribes decided to launch a proactive effort to overcome a 20-year land-into-trust deadlock, the California Fee-to-Trust Consortium was born. The Consortium has made it possible for the federal government to manage Tribal trust applications in a more timely and consistent way. Since its inception, the Consortium has helped to move tens of thousands of acres into trust status. Also, the average processing time has decreased tremendously.

Soboba Tribal Council Chairman Isaiah Vivanco was elected to the Consortium’s executive board in 2021 and during its last meeting at Redding Rancheria in Northern California, he offered to host the next Southern California meeting.

Members come together quarterly throughout the state to share updates and concerns. On July 13, the Soboba Band of Luiseño Indians hosted the meeting at its Soboba Casino Resort Event Center. After serving lunch, the three-hour meeting engaged representatives from about 25 Tribes in person and another 15 or so remotely via Zoom.

Although Soboba hosted a meeting in 2020 in conjunction with its signing of the Olive Cernia property into trust, having Assistant Secretary for Indian Affairs for the U.S. Department of the Interior Bryan Newland attend this most recent meeting was an unexpected and welcome occurrence.

“He happened to be visiting California from Washington, D.C. for the week,” Vivanco explained. “Our BIA Regional Director had asked him to modify his itinerary to include a visit to Soboba, the host site of the quarterly meeting. We were honored by his presence; it’s not every day you have the Assistant Secretary of Indian Affairs on your homelands.”

Prior to arriving at Soboba, Newland had been in San Diego for a meeting. Afterwards, he drove to Santa Barbara County for a visit with Central California Tribes.

Vivanco said the Consortium meetings usually provide updates on current applications, adding that this particular meeting also addressed potential upcoming changes to the process, which was also included in the discussion with Assistant Secretary Newland.

A Consortium member since its establishment, the Soboba Band of Luiseño Indians has found the relationship to be advantageous.

“Being a member has helped with our applications that get submitted to the BIA,” Vivanco said. “The BIA is active with the Consortium so we get updated often as to what needs to be addressed in order for our applications to continue moving forward.”

Taking land into trust (or fee-to-trust) is one of the most important functions of the BIA. Acquisition of land in trust is essential to Tribal self-determination. Tribes are sovereign governments and trust lands are a primary focus of Tribal authority.

“Tribes are always trying to grow their acreage. It may be for housing, economic development, cultural or a number of other reasons,” Vivanco said.

Placing tribal land into trust is the process where the Department of the Interior acquires the title to a land and holds it for the benefit of a tribe. Tribes take land into trust to build economic development, regain ancestral territory, and protect culturally sensitive areas, among other reasons. The California Fee-to-Trust Consortium was first created to help address an enormous backlog of land trust applications, partially due to budget cuts and lack of staff. 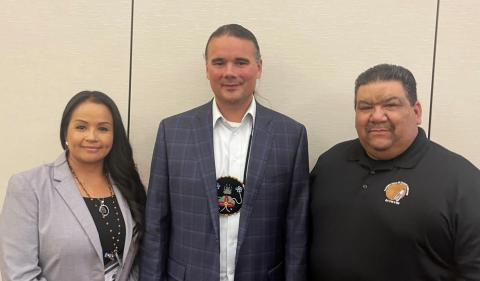