They are on their way to first grade ◆ By Mike Hiles

Amid a theme of completing a journey that makes them ready for first grade, 17 Soboba Tribal Preschool kindergarten students received a "passport" that will take them to wonderful places as they continue their educational journey to first grade and beyond.

With hand-beaded mortarboards, and leis of dollar bill rosettes, candy bars and flowers hanging from their necks, it was hard to remember that the graduates crossing the Soboba Sports Complex stage to the strains of Pomp and Circumstance were mostly six-year-old children.

A colorful array of balloons and signs such as "We're on our way" and "First grade here we come" adorned the stage where the students sat until it was time for them to perform songs for the friends and multi-generational family members that filled the gymnasium's bleachers on June 2.

Behind the stage, tables designated for each student included a memory yearbook, a stuffed bear wearing a graduation cap containing autographs from their classmates and various student art and writings that bore the fruits of their growth and transition from preschooler to first grader. Several of Friday's graduates proudly displayed a feather in their cap – an eagle feather to be exact – to mark this milestone moment in their young lives. Eagles are known by many tribes to be a messenger to the Creator, symbolizing bravery, respect, personal achievement and honor. Eagles are protected under two federal laws: the Bald and Golden Eagle Protection Act and the Migratory Bird Treaty Act. These prohibit the possession, use and sale of eagle feathers and parts, with an explicit exception for American Indians who are enrolled members of federally recognized tribes.

Emily was recognized for her overall academic excellence and wants to be the future president of the United States one day. Lokelani received a math award and aims to be a police officer so she can help a lot of people. Victoria plans to be a rock star or a movie star in the future and was singled out for her "impeccable writing," great penmanship and "fabulous creativity."

Rita Villanueva said she loved the school and wished her daughter Victoria could stay another year.

"She learned so much this year – like how to read and write. She progressed so much with Miss Cindy," she said.

Wynonah is the youngest student in the class at five years old was also deemed the most creative. Her teacher, Cindy Lee, said she had the best posters and when they studied animal life science, she created the best diorama. Wynonah wants to be a ballerina when she grows up.

Jimmy is a very determined and motivated student and earned an outstanding reading award. Keith Escalante wore a suit under his graduation gown and a bowtie, which his teacher said he wore to school often. With aspirations to be a "bone expert" scientist one day, it was no wonder he received an outstanding achievement certificate in the field of science.

"He is so enthusiastic," Lee said about Keith. "He comes in every day so eager to learn and he has the greatest heart."

Lee said Tamara also displayed a lot of confidence in her reading and writing, for which she was recognized with an award. She wants to be an artist and "paint beautiful pictures."

Alana was given the best citizenship award and also one for outstanding achievement in social studies.

"She always wants to make sure everything is fair," Lee said.

Jordyn has been at the preschool since she was three years old and entered kindergarten already knowing how to read but is now reading chapter books such as the Harry Potter series. She received an award for reading and writing.

"She wants to be a veterinarian one day – but just for dogs and cats," Lee said.

Elizabeth loves animals and wants to have a farm so she can save them all. She was acknowledged for her achievement in life science. Gemma wants to be a dentist and received awards for her outstanding abilities in reading and math.

Mathias is a builder and likes math, for which he earned a certificate. Some day he would like to be on You Tube to show people how to play video games. Nowaniiki was given a homework award and a "tech" award as well as being named one of the class's best readers. He plans to go into some form of public safety when he grows up – either with a police or fire department.

Noko$aat is one of the best adders in the class and was given a math award. He enjoys animals and wants to be a horse trainer. Lee said Sonny always has lots of questions when he comes to class so he was given a special award for science and research. His goal is to serve in the military.

Madison was given a reading award for excelling at learning all her sounds, blends and decoding. She is also a Fancy Shawl dancer but her real ambition is be a songwriter.

"She wants to write songs that will make a difference," Lee said.

Jason was given a special S.T.E.A.M. (Science, Technology, Engineering, Art and Mathematics) award because he always adds details to everything he builds to make sure it's artistic as well. He also earned a homework award. In the future, he wants to be a professional skateboarder and give back to the world by giving poor people all his money.

Director Dianne King thanked parents and other family members for trusting her and her staff to care for the children as they attended classes and learned so many academic skills.

"They are all well prepared for first grade," she said. "These children really have some amazing goals and Miss Cindy has done a great job helping them become self-confident. I want to thank her for expanding their minds and teaching them they can be all they can be and that learning doesn't end after high school or even college."

Lee said the children worked hard all year long and were involved with many community activities that helped teach them compassion for the earth, animals and other people. Along with English and their native Luiseño language, Lee also taught the children some American Sign Language, which they demonstrated in one of the songs they performed.

Tribal member and former chairwoman Rosemary Morillo's grandchildren attend the preschool and grandson Sonny Small graduated with the kindergartners. She offered a blessing on the next generation and encouraged parents to keep Native traditions alive in their families.

The ceremony concluded with bird singers being joined by the young boys with rattles they had made as the girls danced in ribbon skirts made with help from students at Noli Indian School. On June 1, a record number of preschoolers were promoted and 20 of those 27 will be attending kindergarten at the tribal school next year. 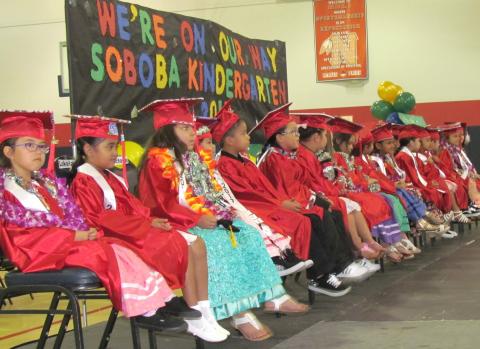 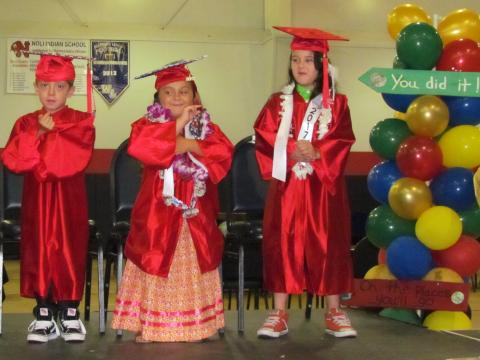 From left, Kindergartners Sonny Small, Madison Swan and Jason Valenzuella use American Sign Language while performing a song for friends and family at their graduation ceremony at the Soboba Sports Complex on June 2 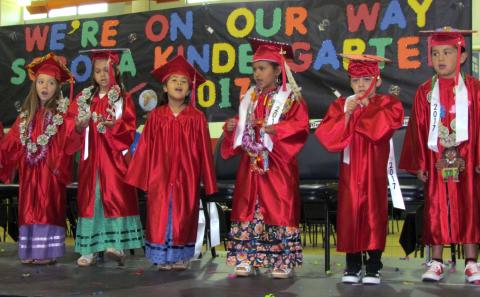 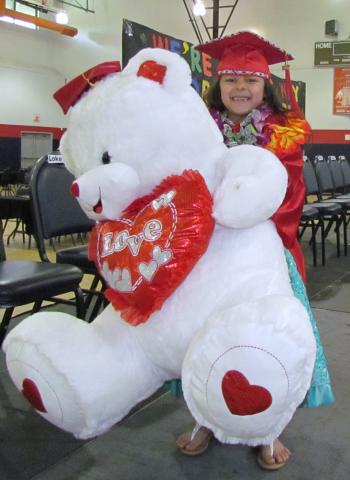 Kindergartner Victoria “Vicky” Boiso, 6, receives a pre-graduation gift of a giant stuffed bear before the ceremony on June 2. “I can’t believe we’re graduating,” she said