With the swing of a golf club by Soboba Tribal Council Chairman Scott Cozart, a ceremonial inaugural tee-off marked the official opening of the renovated golf course at The Country Club at Soboba Springs. And with the fresh look comes a new name: Traditions at Soboba Resort & Casino Golf Course.

The renovated holes were designed by Cary Bickler, golf course architect and apprentice to Desmond Muirhead, the original 1966 golf course designer. Bickler was brought back in 2006 for a redesign and oversight for the current design and remodel of the 18-hole championship golf course.

"The completion of every project feels rewarding, but this project was especially rewarding and exciting for me," Bickler said. "The original golf course architect (Muirhead), had been a mentor of mine and I appreciate the value of his work. I understand what his intention was as he routed and designed this course. The new holes I designed fit seamlessly with the existing portion of the course. They mirror many of the elements that were preserved, and at the same time, they bring the overall golf course experience to an incomparable level."

With more than 7,300 yards of playing area, Traditions features a new signature hole called the Island Green which took 25 million gallons of water to fill. Its arched bridges and multiple waterfalls makes it the centerpiece for the Soboba Casino Resort. The new 425-yard Par 4 Island Green at Hole #13 adds not only a memorable hole, but it also invites the golfer to take on the exciting challenge of landing the ball on a green surrounded by water.

There is also now the fourth longest Par 5 on the PGA Tour, at the 641-yard Hole #15. As golfers navigate this hole they will find multiple levels of risk and reward based on the accuracy of their shots.

"Both of these new design elements add a unique level of excitement," Bickler said. "Of the four (redesigned) holes, there are two very demanding Par 3s from the Tour Tees at Hole #14 (206 yards) and at Hole #16 (235 yards). Holes #13 through #16 will be a strong test in the golfer's finishing portion of the round and will most likely determine the winner in competition."

Bickler's interest in golf course design began very early on. He was only 14 years old when he met his first golf course architect on a family-owned golf course construction site. He said from that point on, he knew what his career path would be and he continued in all the educational and apprenticeship disciplines until he was ready to open his own golf course design firm in 1968.

Bickler began working with the Soboba Band of Luiseño Indians on the current renovation design in May of 2017.

"I studied a variety of ideas and options and chose my favorite design for the enhancements to the golf course," he said. "I presented that idea to the Soboba Tribal Council and we agreed on the exciting concept that I thought was the very best."

During the actual construction of the project, Bickler made weekly visits and directed the design intent on-site as the golf course was taking shape. In this way he had a direct line of communication with the golf course construction contractor (Earth Sculptures) enabling them to address the multitude of details, large and small, to everyone's complete satisfaction.

Representatives from the valley and county that attended the grand re-opening of the golf course on June 29 were introduced by Tribal Administrator Michael Castello and welcomed by Soboba Tribal Council Chairman Scott Cozart, Vice-Chair Isaiah Vivanco, Secretary Monica Herrera and Treasurer Kelli Hurtado.

"We have seen some amazing changes and we are very proud of the opportunities and accomplishments that have come our way," Castello said. "Cary Bickler was the mastermind behind the design and did an amazing job bringing this from concept to fruition."

Several proclamations were bestowed upon the tribe with the underlying message that the Soboba Band of Luiseño Indians is doing important things for the San Jacinto Valley.

The city of Hemet cited the tribe for its ability "to lead in increasing our communities' prosperity, providing jobs, increasing tourism and local economic stimulation to attract and retain local businesses." Hemet Mayor Michael Perciful and city council members also applauded the tribe for being strong community partners through its sponsorship of community events and recreational sports for all ages.

San Jacinto Mayor Crystal Ruiz and council members recognized the tribe for its renovated golf course stating: "Traditions will offer San Jacinto residents a PGA-rated golf course with beautiful amenities, making it a wonderful addition to the new Soboba Casino Resort and an enjoyable experience for all skill levels of players."

"The city of San Jacinto is truly standing behind you," Ruiz said to Tribal Council members. "We want you to know how much you mean to us. We are blessed to have you as partners and friends."

Legislative Assistant Sundae Sayles, on behalf of Third District, Riverside County Board of Supervisor Chuck Washington, presented the tribe with a certificate "in recognition of your outstanding investment in our business community and tourism industry. We highly regard the economic value and recreation it brings to the residents of Riverside County."

"This is an outstanding investment for our community and we want to make sure everyone knows about," Sayles said.

A Certificate of Congressional Recognition from Dr. Raul Ruiz's office was delivered by Patrick Keplinger, Veteran Caseworker and Field Representative. Chad Mayes, 42nd Assembly District of the California State Legislature sent a certificate of recognition for the tribe and thanking them for their "service and commitment to the community." Field representative Rosilicie Bogh added her thanks to all who collaborated on the project.

"Thank you for the vision you have for the community," she told Tribal Council members.

Art Welch presented a certificate from State Senator Mike Morrell. Welch said he has played on the golf course several times a year for more than a dozen years and was impressed with the new design.

"This is bigger than just our community," Castello said. "This is not just a great opportunity for the tribe but for everyone who is part of this valley."

"When we were doing architectural work, we knew what yardages we wanted for each hole and we achieved those yardages in the re-rating," he said. "Having it rated by a USGA team helped us with calculating the new course rating and handicaps for each hole."

The course's back tees (tour tee box) has a 75.3 course rating and a slope of 140. This means if a golfer is a scratch handicap that golfer would shoot 75 from those tees. Water features and bunkers add to the difficulty of a hole which is a factor in calculating the rating. The handicap on each lets the players know how difficult that hole is. Each tee box is rated differently.

"The feedback we've been receiving has been outstanding," said Luchowski, adding that with the opening of the new Casino Resort, they are looking forward to having more corporate outings and major golf tournaments over time.

"It's difficult for me to pick out any one (favorite) element in the new design, but what I can say is I'm thrilled with the result and it's everything I had hoped it would be," said Bickler, who comes from a golfing family and can't remember a time he didn't play the sport. "People will be talking about this golf course. Just as important, they will want to return to play it time and again." 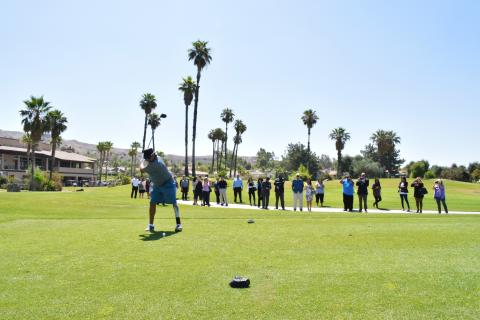 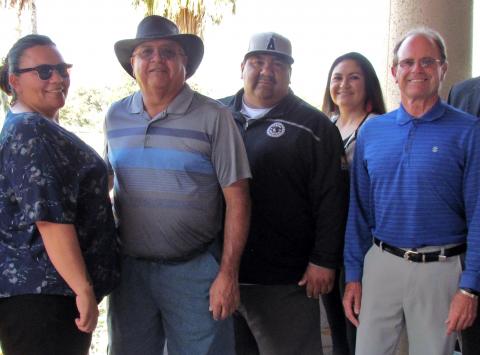 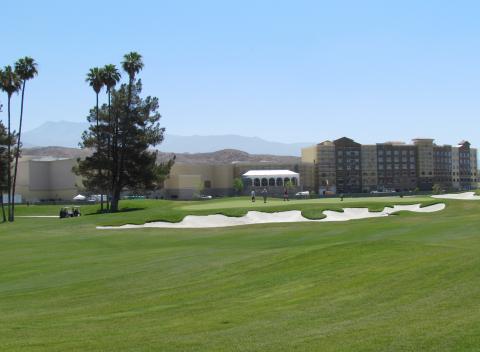 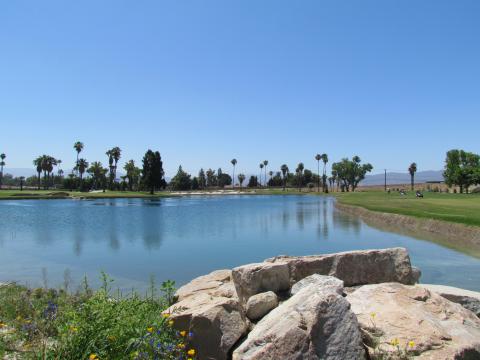 One of several water features at the renovated Traditions at Soboba Resort & Casino Golf Course, which officially reopened on June 29 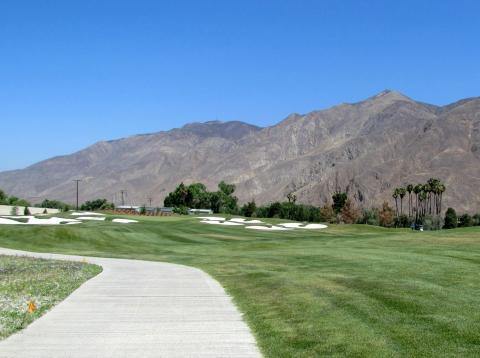 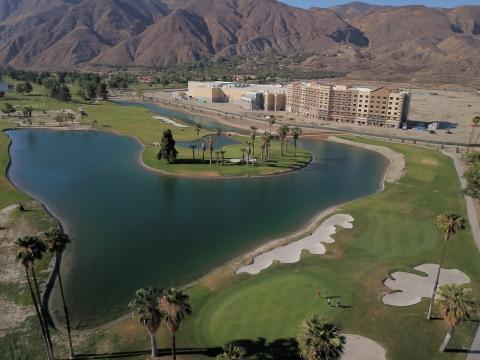