San Jacinto, CA – With a nod to the past and an eye to the future, the Soboba Band of Luiseño Indians officially opened its new fire station east of the Soboba Casino Resort on June 7. Speakers and a ribbon-cutting ceremony preceded facility tours and lunch. The paved area behind the station displayed the department’s three vehicles: Engine 1, Brush Engine and a Tractor-Driven Truck also known as a Tiller Engine.

Emcee and Tribal Administrator Michael Castello welcomed invited guests inside the three-bay area with polished concrete that was filled with tables and chairs to accommodate about 300 people of all ages that came to share in this momentous occasion.

“We’ve been working on this for more than a decade and are very proud and honored to showcase it with all of you today,” he said.

Soboba Tribal Council Vice Chair Isaiah Vivanco acknowledged the new fire station as another piece to a bigger puzzle, with the first being February’s opening of the Soboba Casino Resort.

“Being a partner in the valley and making sure we are a part of it and coming together and revitalizing the community is very important for the tribe,” he said.

The Soboba Fire Department was established in 2014 and was housed in a much smaller space shared with Soboba Public Works before the new facility was built. At 13,400 square feet of living space, offices for administration and training and engine bays, it will be able to comfortably accommodate 21 staff members divided among three shifts so there is full coverage available 24/7.

Fire Captain Roger Salmo said when he got a phone call two years ago about joining Soboba Fire, he was told about the tribe’s vision to have a strong fire department with a solid foundation.

“It was not only to provide coverage for the Soboba people but the whole area,” Salmo said. “We look forward to continuing to work with AMR, Hemet Fire and CAL FIRE and others. We are currently training with these individuals so when we arrive on scene we will be a cohesive group.”

Architect G.V. Salts from STK Architecture, Inc. was asked to say a few words about the beautiful and functional building that everyone was happy to see open for operations.

“It took 16 months from design to completion,” he said. “In my 32 years of doing this, it was the fastest I’ve ever seen a station done. We worked together as a team and I’m very proud of this project.”

Salts said another outstanding feature is that it was designed as an emergency operations center. With a generator at the rear of the property that will power the entire building 100 percent it will be a central command center and hub for the community during any major disaster.

“Our message today is very simple,” he said. “On behalf of the entire City of Hemet Fire Department and every fire agency here in the valley we stand committed to work together to support you and to build on traditions that have been built and to provide the best service possible for our community.”

Glenn Patterson has been hired as the next Soboba Fire Chief and will start July 1. After 33 years with CAL FIRE and about 18 months as Assistant Deputy Director, Fire Protection Operations in Sacramento, Patterson welcomed the opportunity to return to the area he knows well.

“I spent 31 of my years with CAL FIRE in Riverside County,” said Patterson, who lived in the San Jacinto Valley for 25 years. “Being familiar with the area and firefighting operations, I’m looking forward to getting started here.”

Tribal Council Member at Large Rose Salgado acknowledged the efforts of tribal elders and past Tribal Council members who made this all possible.

“It was a long time coming and you are all to be applauded – we are so appreciative,” she said. 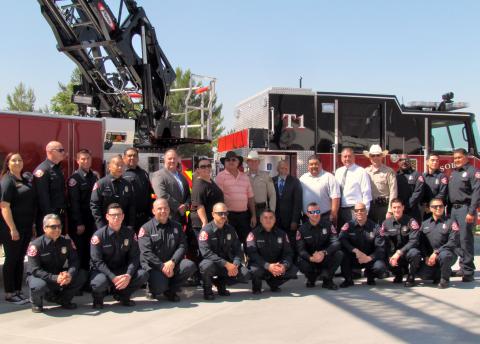 Members of Soboba Fire, Soboba Tribal Council and other dignitaries stand in front of the department’s new Tiller Truck during the official opening of the new facility on June 7 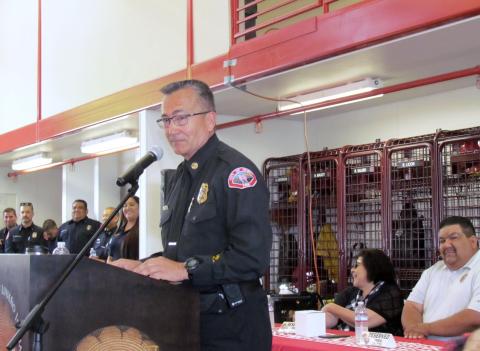 Hemet Fire Chief Scott Brown was on hand to congratulate the Soboba Band of Luiseño Indians on the opening of its new 13,400 square foot fire station near the new Soboba Casino Resort 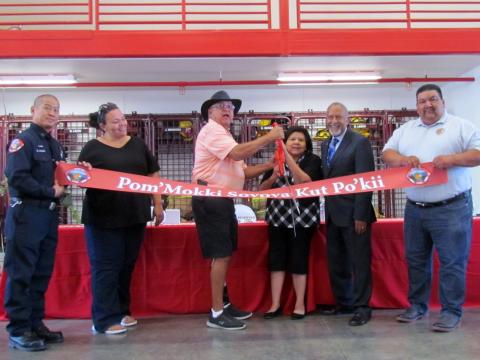 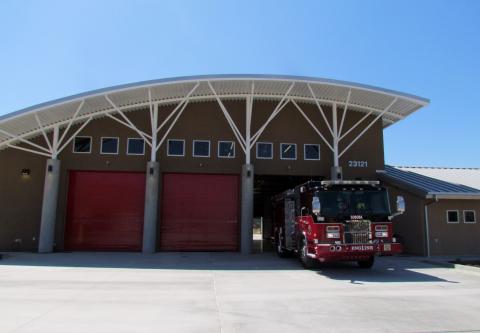 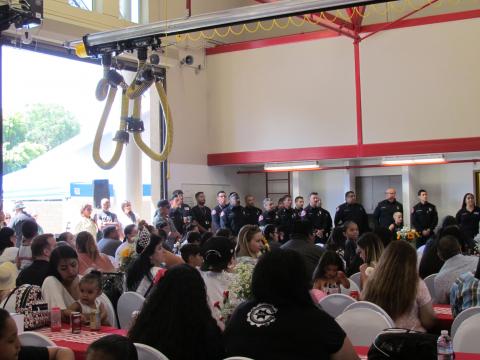 About 300 invited guests attended the ribbon cutting ceremony to mark the opening of the Soboba Band of Luiseño Indians Fire Station No. 1 on June 7. Most of the department’s fire personnel were able to be on hand for the event