A dozen new faces to be added ◆ By Mike Hiles

Many job-seekers just have to practice answering questions in a sensible way or making sure they have professional-looking attire for their interview. For the 56 applicants at the Soboba Fire Department, the process was a little more intense.

“I have been working with AMR’s Jack Hanson on developing a paramedic program and be our paramedic coordinator for Soboba Band of Luiseño Indians,” he said. “With this partnership it will give our community the best medical care possible. Through our partnership with AMR we will gain different training opportunities, provide audits and help keep the Soboba paramedics’ skills up to a high standard. As part of the EIS requirements, we are hiring personnel to provide additional coverage for the Soboba community and developments. The surrounding areas, including San Jacinto and Hemet, will also benefit with the additional fire personnel staffing, fire apparatus and upgraded paramedic program.”

The recent skills training for EMT and paramedic applicants had the opportunity to utilize AMR’s new mobile training unit that can produce a mega code simulation. After candidates took a written exam and before having a face-to-face interview, they were put through a skills test using a state-of-the-art mannequin that AMR uses for training purposes. The command center was located inside an ambulance where Joshua Dehart guided the mannequin’s breathing and vitals via a laptop computer to create a scenario of someone suffering from a heart attack. The realistic training device can “talk” and “hear” by means of Garland “Butch” Carpenter who wore a headset inside the vehicle.

“We just got this (training) ambulance two months ago,” said Carpenter, who has been a paramedic for 32 years. “We have always had a training program but this is just one more tool to augment high-risk, low-frequency skills.”

Dehart has been a paramedic for six years, three of them with AMR, and said he was offered the role of training with the new equipment because of his technical knowledge.

“I’m one of the few people who is able to program scenarios as designed,” he said. “Today we tailored (the mannequin) to issues we’ve had clinically – it’s a pretty basic scenario.”

Carpenter said paramedic candidates were graded on several things, including how well they delegated to the others with him on the simulated call. He said they need to realize they can’t do every single skill by themselves and need to be free to focus on being positive for the patient.

“On a real ambulance, crew members must get used to the order of how things are done,” Carpenter said. “There are some things I like to do myself to be sure they are done to my satisfaction and other things I can trust my partner to do.”

The skills test on the simulated man took about 15 minutes per applicant during which time they were observed and graded for such things as scene management, delegation of duties, assessment flow, following policy, speaking clearly, interpretation of EKG reading and recognizing “red flags” that were created by the trainers inside the ambulance. The patient complained of feeling nauseous (via Carpenter) while his blood pressure was raised via Dehart’s computer. Candidates who made the cut will receive shift assignments on July 6.

“Before we have them start, they will need to have a background check and be sized for protective safety equipment,” Sandoval said. “They will be on the floor by July 2 learning about customs and traditions of the Tribe and all our policies and procedures.”

He said that by the time the replacement casino is open everyone will be fully trained and familiar with personnel currently on duty so they will able to operate as one unit.

Sandoval said most of the applicants heard about the job openings through word of mouth but it was also advertised on the Soboba Band of Luiseño Indians’ website and in a firefighter career publication.

“People see the good name we have and what we’ve done so far and they are excited to be a part of that,” he said. “People are embracing us as they see how proficient we are. We go in quietly and leave quietly – our actions speak louder than words. We don’t tell them how great we are, we show them.”

Sandoval, who is in his 35th year of fire service, said once his department gets paramedics on board they will be able to offer the same kind of service that neighboring communities of Hemet and San Jacinto do. Both cities are included as part of a mutual aid agreement with the Soboba Fire Department.

He said aside from all the testing and training his department’s personnel receive on a regular basis the main lesson they need to remember is that people should be treated with respect, no matter what.

“Our job is customer service plain and simple,” Sandoval said. 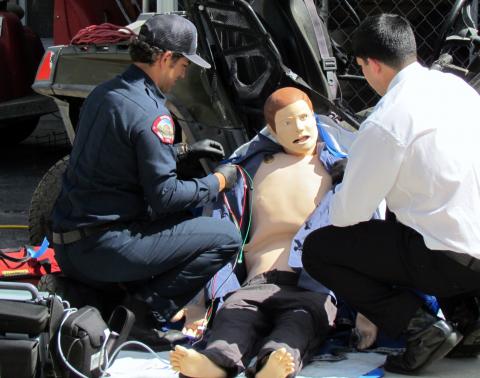 Soboba Fire’s Joey Mendoza, left, assists a paramedic candidate with his skills testing on a state-of-the-art mannequin during a recent day of hiring at the Soboba Reservation 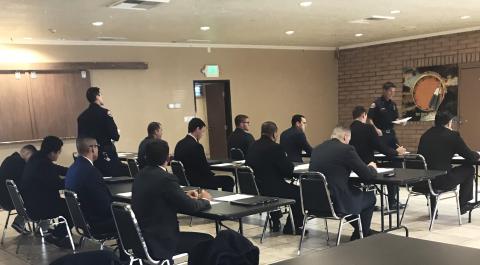 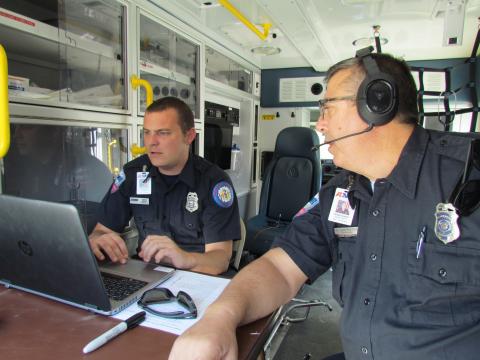 AMR paramedics Joshua Dehart, left, and Garland “Butch” Carpenter prepare to run candidates through a simulation scenario during a day of hiring for positions with the Soboba Fire Department 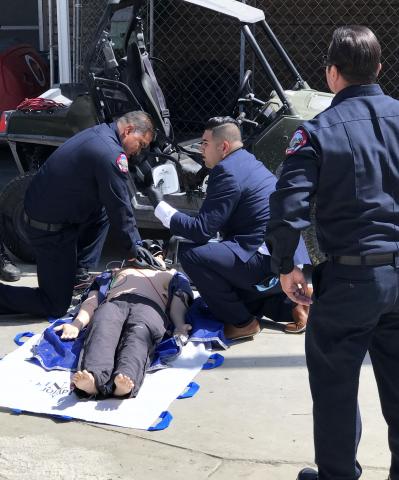 Soboba Fire’s Jacob Briones, left, assists during a skills test for EMTs at the Soboba Reservation on April 13