Growing up, Glenn Lindsey always thought about becoming a firefighter but it wasn’t until he worked with the Soboba Band of Luiseño Indians’ NCIDC program in 2017 that he decided it was time to pursue that career path. The NCIDC (Northern California Indian Development Council) is a private, nonprofit corporation funded by government grants to offer Native Americans jobs on reservation lands.

After graduating from the San Pasqual Reservation Fire Academy, Lindsey was hired by the Soboba Fire Department that has been in operation since 2014. A recognition ceremony was held at the fire station on Feb. 25 to officially welcome Lindsey to the team as his friends and family looked on.

“The efforts and incredible influence of strong leaders and family members – those who are present and those that are in memory – have contributed to this man’s decision to follow this path,” Interim Fire Chief Primo Reynoso said. As a tribal member, Lindsey lived on the Soboba Reservation for many years but recently moved to the city of San Jacinto with his fiancée Glori Beltran, four-year-old stepson Xander and 10-month-old daughter Avareign. The Hemet High School graduate is currently in the process of finding land to build a new house on the reservation so he can move back, where he will be closer to work.

“I’m so proud of him,” said Lindsey’s mother, Michelle Morillo. “I’m excited and nervous at the same time, though. He went from motocross to this.” “Racing motocross for eight years prior to attending the fire academy meant I was always on a strict training program which consisted of working out in the gym, mountain biking, eating right and training on and off the track,” Lindsey recalled. “I feel this prepared me for this career path by giving me the mindset for training hard to perfect my craft just as firefighters do.”

He attended the academy from June to September of 2018 and said it was a mixture of college classes and an intensive live-in experience. He would wake at 5 a.m., then line up for physical training at 5:45 a.m. for about two hours. That was followed by uniform inspection after which the cadets would be dismissed to the classroom to learn about the subject of the week followed by some hands-on training with equipment and tools.

The second half of the day would be spent outside dressed in full structure firefighter gear doing drills and exercises depending on the certification the group was working towards that week.

“It was tougher than I expected,” Lindsey said. “I trained prior to the academy to be prepared but it definitely pushed me past my limits, which was good. It taught me a lot about myself and gave me a better understanding of the physical and mental strength you must have as a firefighter.”

The San Pasqual Reservation Fire Academy is accredited by the Office of the California State Fire Marshal (SFM) and the International Fire Service Accreditation Congress (IFSAC). It provides for 32 individual certifications and 15.5 college units. It is the only Fire Academy in California to provide the IFSAC accreditation, allowing its graduates to compete for jobs in the United States and abroad. The college units earned can be applied to an Associate’s degree.

“I am so happy I was given the opportunity to be a positive influence for my fellow tribal members,” he said. “I aspire to be a fire captain one day and eventually achieve my goal of being a fire chief.”

Lindsey, hired as a Firefighter EMT, will be an integral part of the recently implemented Advanced Life Support program, a project started three years ago with a co-partnership alongside AMR (American Medical Response). Soboba Fire Captain and EMS Coordinator Roger Salmo said the extensive assistance, knowledge and training from AMR allowed them to start the program.

AMR’s Medical Director Dr. William S. Dukes, Operations Manager Jack Hansen and EMS Coordinator Butch Carpenter have provided Soboba Fire with all it needed to develop this program in collaboration with AMR, enabling the fire department to better serve the community with qualified first responders. “The academy prepared me very well but it was only the basics,” Lindsey said. “Now that I am a full-time firefighter, I am learning more advanced techniques and skills. But being in fire service, everyone is always learning.” 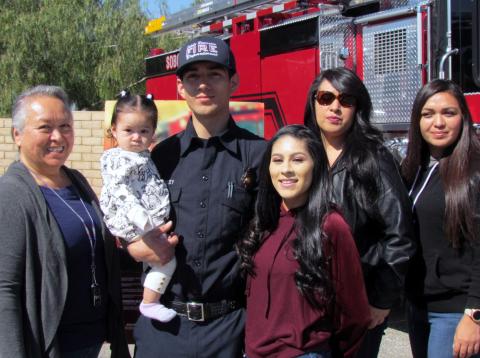 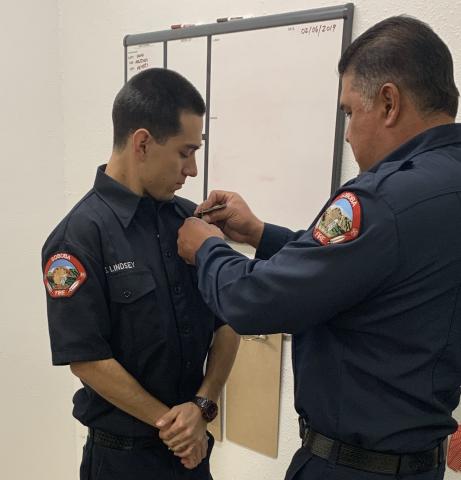 Glenn Lindsey, left, has his badge pinned on his shirt on his first day of work by Fire Apparatus Engineer Jacob Briones at the Soboba Fire Department on Jan. 31