For those that are unfamiliar with the intense sport of rugby, it can best be described as a game of passion that’s full of action, excitement and beauty, as well as unpredictable moments and dramatic resolutions on the field. Rugby is governed by laws, not rules. The laws of the game are designed to produce an entertaining and free-flowing contest for possession in an attempt to score the most points.

Rugby is a close-contact team sport that originated in England in the first half of the 19th century. The game is played between two teams of 15 players each, using an oval-shaped ball on a rectangular field called a pitch.

Dustin Karnes started playing rugby about seven years ago. While coaching soccer, the men’s rugby team Siouxland Swine out of Nebraska were practicing on the field across from his team.

“I knew a few of the players and they kept asking me to come try it out. I was soon on the team,” Dustin, of South Dakota, said. “Rugby is not a very popular sport here in the Midwest but you can always find a team to play on.”

Dustin, 43, currently plays the position of prop for the Indigenous Warriors Rugby Club. Props are part of the group that is collectively referred to as the pack, or the forwards. This group’s main goal is to win possession of the ball. These players are usually the heavyweights of the team, using their bulk and strength to try to overpower their opponents. A rugby team has another group as well, the backs or back line.
Dustin’s son Brandon donned his first pair of rugby cleats as a high school freshman. Now a senior at Iowa State University, majoring in Business Administration, Brandon lives in Austin, Texas during the summer to train for rugby.

“I have not found it difficult to find a team to play on since I revolve my life around it, but I have noticed how much it has grown at the youth and college level,” Brandon, 21, said.

Playing tighthead and loosehead prop for the Iowa State University rugby team, he said being fit is an attribute that is necessary to be good in the sport.

“I played football and soccer my entire life and found that rugby is the most physically demanding. You should be able to tackle, pass and communicate on the field – those are the biggest three for the sport,” Brandon said. “I love the culture the most. I have played many sports growing up but the culture in rugby is by far the best.”

Dustin agrees, saying that you can be super aggressive to the other team’s members for 80 minutes but then after the game, you can sit and have a friendly drink with the opposing team. He said good coordination, including passing, kicking and catching the ball are critical skills to be good at the sport. Dustin played soccer in high school.

Brandon often joins his father for games with the Indigenous Warriors Rugby Club, which has players from all over the United States and Canada. The club combines its love for rugby with its love of its cultures. Every tournament they attend, the team participates in a cultural exchange that includes food, dancing and singing with the local Tribal nations. Since players are from all over, this allows them to be in a community with one another.

“The club has played in New York, Mexico and Alaska in the past. We are traveling back to Alaska this June to compete,” Dustin said.

Rugby season in the Midwest takes place in the fall but at the professional level, it begins in the spring and goes into the summer. There are currently 12 teams in Major League Rugby scattered across the country.

Brandon said, “I was recently drafted to the Houston SaberCats and played there during the preseason, but since then, I decided to return to school to get my degree since I was drafted a year early.”

He said he has always wanted to live in Texas so he would be happy to end up on any of the teams there. This past summer, he played in the Collegiate Rugby Shield, a post-season College Rugby All-Star competition held annually at Zions Bank Stadium in Herriman, Utah featuring players from every conference.

“I also played for the U-20 national team in the summer of 2021, so becoming a USA Eagle is a dream of mine and being able to represent this country playing the sport I love will be a dream come true,” Brandon said.

Theresa Seaton (Silvas) and Deatra Manzanilla, who live on the Soboba Indian Reservation, are related to Soboba Tribal members Brandon and Dustin Karnes.

Photos courtesy of the Karnes family

Brandon Karnes, left and his father Dustin Karnes play with the Indigenous Warriors Rugby Club, as well as other rugby teams 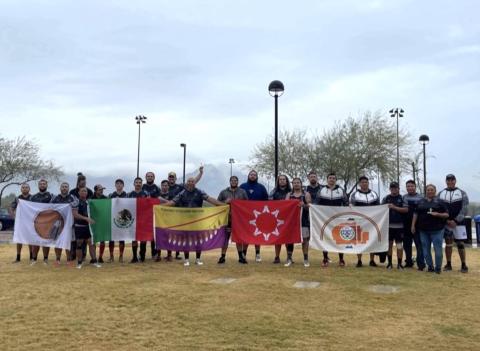 Players from many different Nations play with the Indigenous Warriors Rugby Club. Here, at a December event in Arizona, Brandon and Dustin Karnes are at the far left representing the Soboba Band of Luiseño Indians 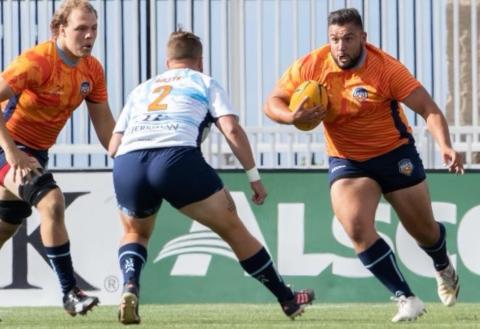 Brandon Karnes is a prop on his college’s rugby team. He has been playing the sport since he was a freshman in high school 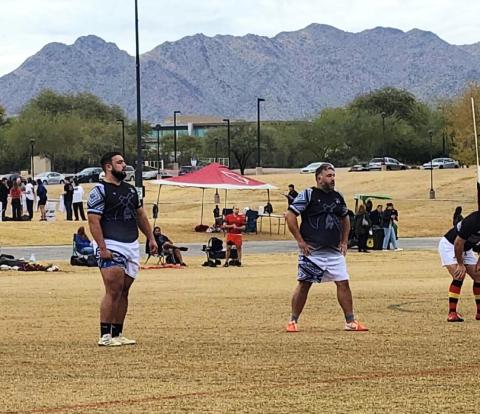