The annual Soboba Tribal Christmas Party hosted by the Parks and Recreation Department took on a different look this year, but the laughter and joy were present as always. Families who reserved a spot for the drive-through event were treated to live holiday music from DJ Mike Nevarez as they were guided past trunks trimmed with festive decorations and tasty giveaways.

“Blessings and good health to everyone,” Nevarez announced as he welcomed each family by name during the allotted timeframe they were given to make the ride as smooth as possible. “We want to thank all the volunteers who donated their time and gifts to make this a Merry Christmas.”

Community members set up tables and handed out sweets to children riding in the vehicles and Santa was on hand to give each one a wrapped gift during the three-hour party.

Steve Lopez, Sports Coordinator for Parks and Recreation, said nearly 400 gifts were purchased to make sure no one missed out.

“We shopped at the end of each week as the reservations came in so we knew who to buy for,” he said. “We had baby gifts for 0-3 and then boy or girl gifts for ages 4-10 and 11-13. We purchased Amazon gift cards for older kids.”

Shannah Medina said her sisters helped to set up “The Nightmare Before Christmas” themed trunk that delighted the children who rode by in their vehicles, some of them in the open beds of pickup trucks that gave them a more up-close and personal experience.

Jodie Arres and Steph Arres Almanza and her girls decorated with “A Charlie Brown Christmas” motif that brought recognition from all ages of kids that drove past.

At last year’s Christmas Party, the Arres’ sisters (Amelia, Vicky and Marilyn) had a hot cocoa booth. With this year’s set-up change, they pre-packaged a bag of hot cocoa mix and some fruit treats to hand out with miniature candy canes and lots of good wishes for a happy holiday.

Soboba Youth Council filled the back of a pickup with a fully decorated Christmas tree that had wrapped gifts underneath and “snow” all around. The look was later lit up with colorful strands of Christmas lights to enter Soboba’s third annual Light Parade that started shortly after the gift-giving event ended and earned a first-place win.

“We wanted to participate as a youth group as a way to contribute to our tribe and show what we do,” Tatiana Briones, 15, said. “We want to be good leaders and a good example to our youth.”

Plastic candy canes filled with M&Ms were handed out to each child that attended the party, as youth council members wished them all a happy holiday.

“We are so thankful for everyone who participated this time,” Tribal Council Secretary Monica Herrera said. “Every child got a stocking and the raffle winners were super excited. It was a nice surprise for everyone because no one knew the adults would have a chance to get a gift, too.”

Dione Kitchen, Executive Assistant to the Tribal Council, said names were randomly chosen from those that RSVPed for the event and 75 raffle prizes were given away.

“We didn’t tell them ahead of time and they were so thrilled, especially ones that got the big TVs,” she said. “Because this year had to be done a little differently, Tribal Council decided to add the raffles to make it extra special.”

Before heading out of the main parking lot, party-goers were given to-go meals of a turkey dinner with all the trimmings for each family member prepared by Skip Thomas Catering.

Many families drove back to their homes to get set up along Castile Canyon Road to watch the light parade that started about 6 p.m. Others entered the parade of about a dozen vehicles that made their way along the route with joyful holiday favorites blaring from speakers. Individually wrapped candies were thrown by handfuls to excited children waiting along the street’s edges.

John “Duke” Briones decorated his cart with lights, wreathes and a “Soboba Rez” sign. His son and grandson had a cart they called “Red and White Surprise” with ornaments hanging from the roof and 8-year-old Frank in a tinsel studded vest.

“I enjoy seeing everyone’s car all lit up and I just like the joy of giving my time to make others happy,” Duke Briones said.

Bianca Machado spent a couple of weeks getting her truck ready for the event. She hand painted oversized cutouts of Charlie Brown, Lucy, Snoopy and Woodstock for her “Peanuts” Christmas design. She was joined by her best friend and nephew who helped her put the finishing touches on everything and won a second-place prize for their efforts.

“I did more planning this year to make it better,” Machado said. “I like that it makes people smile when they see it. I mean, who doesn’t like Snoopy and the gang?”

Daniel and Genevieve Valdez were joined by their 15-month-old son in a brightly-lit off-road vehicle. It is Bruce’s second Christmas but his first time in the light parade.

“I like to keep the tradition going and the spirit of Christmas alive,” Daniel Valdez said.

Renee Rhodes covered her vehicle in lots of lights and was joined by her mom, sister and four children who were set to toss out goodies to parade watchers.

“We just went colorful – we enjoyed doing this last year,” Rhodes said. “We attended the party earlier and it was nice. The kids are happy, and the food was good.”

Bianca Machado, Wayne Nelson won third place for his decorated truck that most certainly contained more lights than any other vehicle in the parade. 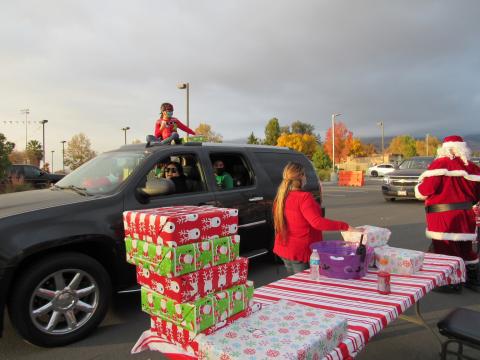 A drive-thru Christmas party was held for Tribal Members at the Soboba Sports Complex on Dec. 12. There was holiday, sweet treat giveaways and Santa presented each child with a gift 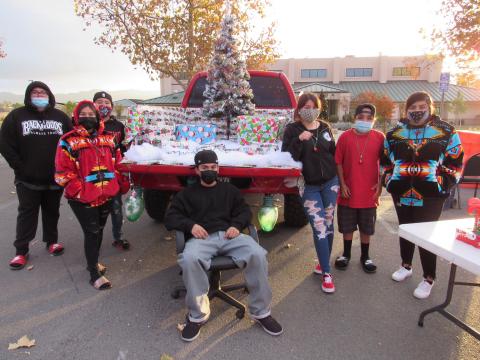 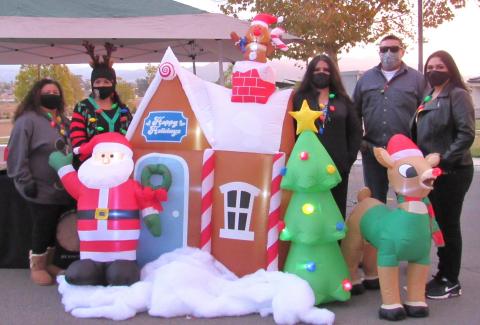 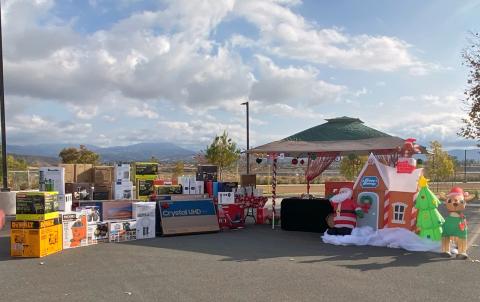 About 75 prizes were included in a surprise raffle for families who participated in the Soboba Drive-thru Christmas Party on Dec. 12 at the Soboba Sports Complex 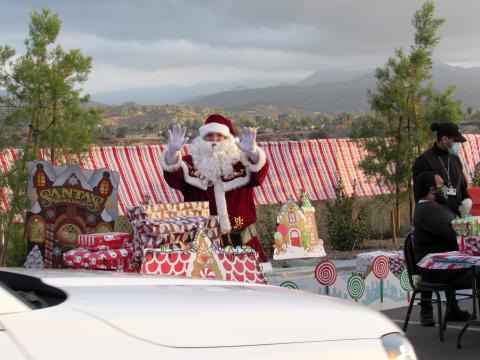 Santa and some helpers greeted each vehicle that drove through the Soboba Christmas Party on Dec. 12 and made sure each child received a present 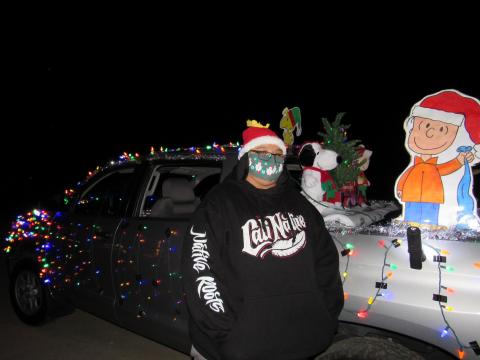 Bianca Machado won a second-place prize for her decorated vehicle during Soboba’s third annual Light Parade on Dec. 12. She hand painted the “Peanuts” gang to make it even more fun and festive