Eight years ago, a handful of die-hard basketball players decided to form a team that could travel to league and tournament games and enjoy some competitive fun. The Soboba Braves took their team spirit to the next level by hosting a tournament at the Soboba Sports Complex March 3 through 5.

More than 10 teams took to the court on the Soboba Reservation to play a guaranteed three games, starting at 6 p.m. March 3. Bracketed play pitted winners from each game against one another for the next game. The Soboba Braves won against WAH on Friday but lost to Arizona's Gametime Saturday morning.

"Since January we have played tournaments in Reno, Pechanga, Bishop and now this one," said Sandoval, 24. "We travel to Nevada, go up to North Cali and Arizona as well. We go to about 10 a year."

In 2015, the team participated in the "Gathering of Nations" tournament in New Mexico.

"I play the position of guard because I'm not tall enough to be anything else," said Sandoval, who lived at the La Jolla Band of Luiseño Indians reservation but has lived in San Jacinto since 2009.

The team gets together about three times a week at the Soboba Sports Complex to keep their skills up. They play league basketball through Valley-Wide Park and Recreation District and at Pala.

"When we travel, we see some of the same players," Sandoval said. "I've played against a couple of the Gametime team members before." He said Boniface usually acts as captain or coach of the team, working with all players to decide when to take a time out and other things. Typical league and tournament play consists of two 20-minute halves with a five-minute halftime.

"Our strengths are that we have some good shooters on the team, we like to push the pace a lot and we get points off fast breaks as well," Sandoval said. "Within five minutes we can size up our competition and see who their shooter is, if they are fast, if they are big and like to go low."

Sandoval played football in high school at Noli Indian School but said the sport of basketball just grew on him more and is now his game of choice.

Besides playing their best, as hosts the team was responsible for helping keep score, making sure there were enough referees, reserving the facility and providing concessions. Freddie's mom, Charlotte Boniface, enlisted the help of her sister, daughter and nieces to run the kitchen and snack bar inside the sports complex.

"We got a really good turnout," Charlotte Boniface said. "We've been wanting to do this for a while. These guys have been playing together since they got out of high school. We are a family team. We didn't net too much profit this year but we will continue to fundraise and plan next year's tournament to be bigger and better. "

All proceeds from the tournament will go back to the Soboba Braves to help offset expenses when they travel throughout the year. Soboba Parks and Recreation Director Andy Silvas said the facility was rented to them free of charge because the event was a tribal team fundraiser.

Silvas played in the tournament with the 4 Feathers team but said he likes to watch all the other teams play, too. "I have played for the Braves and against the Braves – they're a good young team and have come a long way since they first put the team together," he said. Resvaloso plays center guard and has been playing basketball since middle school.

"It's fun; I just love it," he said. "The more competitive the better."

Freddie Boniface said the biggest challenge his team had in organizing the event was waiting for other teams to sign up and then hoping they all showed up on time.

"This is our first year hosting a tournament and we hope to continue hosting one annually from here on out," said Boniface, 25. "The tournament was a good one. We had lots of great talent playing this weekend; strong teams battling for that first-place title. I feel it was good and am looking forward to next year's event." 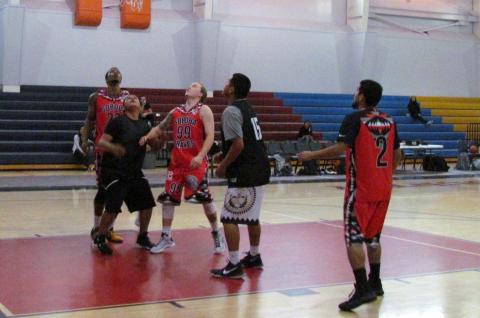 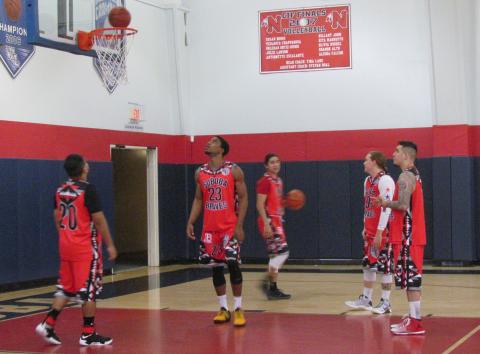 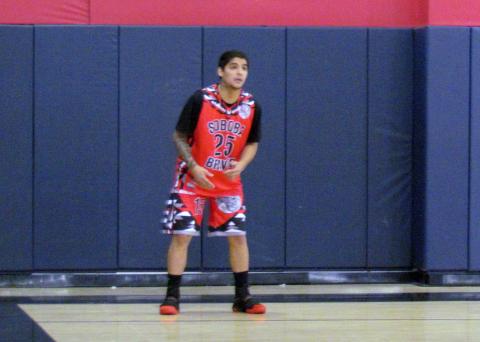 Freddie Boniface, who serves as captain/coach of the Soboba Braves watches the action of his team during a game on Saturday morning 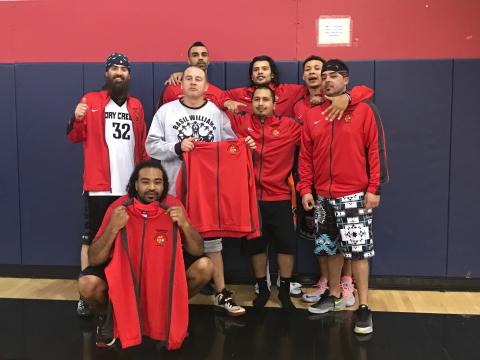 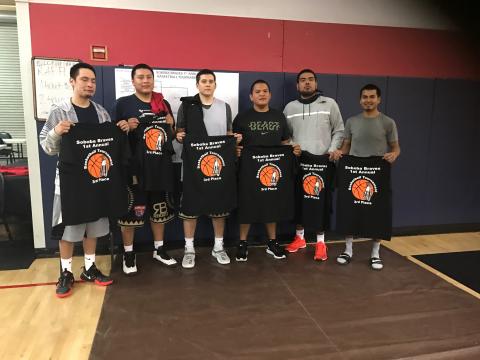 Gametime team players show off their third-place prize at the Soboba Braves Basketball Tournament, which concluded on Sunday 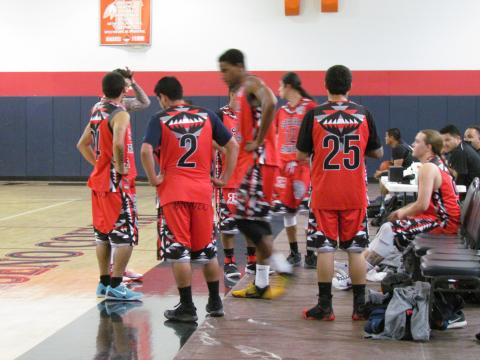