More than two decades has passed since the idea for a competition style pool at San Jacinto High School was proposed. Former school board member, the late Megan Cope, had a dream to add a pool to an otherwise comprehensive sports department. The dream turned into a compelling vision about three years ago, championed by Cope's close friend Deborah Rex, who has been a board member since 1998. With the help of the Soboba Band of Luiseño Indians, that dream has become a reality.

"I'm glad we finally got to this point," said Tribal Administrator Michael Castello, who is a graduate of the school. "On a personal note, sports have always been a huge part of my life, as well as education. Back when I was going to school here sports are really what kept me going and got me motivated. To be able to offer a new outlet for some kids and another opportunity to get them motivated and looking toward bigger and better things is wonderful."

On June 6, a ceremonial groundbreaking was held at the future site of the Soboba Aquatics Center that is set to open for the fall semester in 2019. School board members, school district personnel, Soboba Tribal Council members and employees as well as community leaders met for a short but very significant ceremony near the high school's old gymnasium where the center will be built. The district was presented with a check for $1 million by Soboba representatives.

"We appreciate Soboba and their dedication to our students and our community," said Rex. "This community is rich in their heritage and pride for their students and people."

She added that without the tribe's generosity, many things wouldn't happen for students in the San Jacinto Unified School District and because of them many more things will happen. School Board President John Norman served as master of ceremonies and also presented a plaque of recognition to Soboba.

"As a board, we excel because of the support we receive," Norman said. "We're committed to allowing kids to have opportunities and this (center) is a huge opportunity."

"One of my mentors (the late Dr. Dale S. Holmes who was the Riverside County Superintendent of Schools) taught me early in my career that without a plan there is never enough money and so today I want to thank this community – not only for believing in us – but particularly to Soboba for stepping forth with a considerable donation to make this dream a reality," she said.

Perez said that as leader of SJUSD she is all about equality and access. San Jacinto High School has been the only comprehensive high school in the San Jacinto Valley without a pool, making a definite equity issue in the eyes of the board and the community as a whole.

"Today, this groundbreaking is about our kids getting what they deserve," she said. "It's not just about a pool – it's about the school board supporting FFA, the arts and places of connection for our students."

Soboba Tribal Vice Chairman Isaiah Vivanco addressed the crowd and explained how the tribe's involvement came about. In 2007, the tribe submitted an application to transfer land they had purchased into trust. It was a lengthy process of meeting with city, county, state and federal government representatives including the Department of the Interior. After an eight-year battle, the tribe was finally awarded the land held in trust. This happened in 2015. Part of the impact statement included some mitigation to the school district, which the Tribe could pay over a 20- to 25-year period.

"We thought it would be better to offer it in a lump sum upfront rather than over the years in order to make a bigger splash, so to speak," Vivanco said. "The tribe is excited to partner with SJUSD in bringing the first pool to the district. A lot of tribal members have gone through that school and it's nice to provide the opportunity for students to have water polo and swim teams in their own pool."

The estimated total cost of the project is $6.65 million and in addition to the $1 million from Soboba, will be funded by certificates of participation and local facilities funding (not general obligation bonds). Project architect is Ruhnau Clarke Architects from Riverside and the contractor is Murrieta-based Hamel Contracting, Inc.

The large grant presented by the Soboba Band of Luiseño Indians brought about the naming of the pool as the Soboba Aquatics Center. While the San Jacinto Unified School District and Soboba enjoy a strong partnership, the tribe has supported many other community projects in the past. It contributed to the Hemet Public Library and the Soboba Foundation helps throughout the year in many ways.

"We are excited about our replacement facility and the engine for economic growth that it will bring to the valley," Vivanco said. "We also look forward to continuing our strong partnership in the valley." 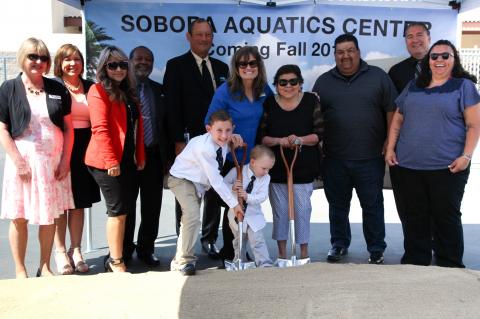 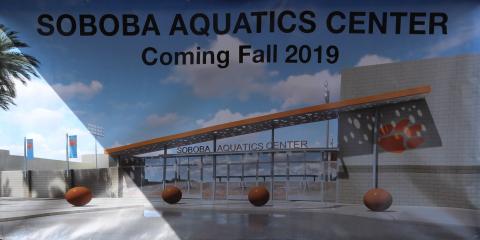 An artist’s rendering of the future Soboba Aquatics Center at San Jacinto High School, set to open in fall of 2019 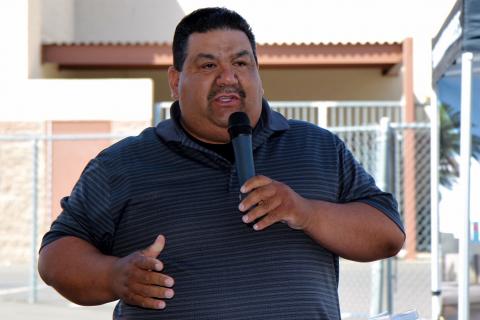 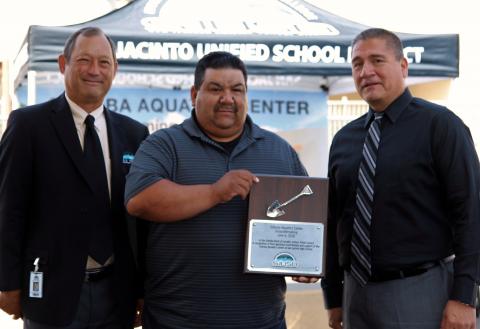