The National Football Foundation's Riverside County Chapter was established in 2003 when Executive Director Bob Burt and Soboba Band of Luiseño Indians tribal member Robert Salgado decided it was needed in the local area. Each year, a scholar-athlete awards banquet is held to recognize outstanding football players from high schools throughout the county.

"It started with Chairman Salgado and his love of football. He wanted to be the major sponsor for the event," said Soboba Foundation Vice President, Geneva Mojado.

For the past decade, the event has been held at The Country Club at Soboba Springs. On March 25, coaches, families and friends came together to honor this year's 23 nominated players at the black-tie affair that has been sponsored by the Soboba Foundation for the past several years.

Bill Powell, who coached football at San Jacinto High School for many years, has been involved with the NFF for 13 years and has been its president for the past six. He said all schools in the county are encouraged to nominate qualified players that meet the following criteria: A grade point average of 3.0 (40%), 1st Team All League, or better (40%) and community service or other related extra-curricular activities (20%).

"These kids are very humbled by the awards," Powell said. "They love the banquet and are appreciative of the NFF and Soboba for everything. Through the Foundation's support we can continue to emphasize the importance of academics, service and athletics to motivate these young men to all reach their God-given potential."

Soboba Foundation secretary Dondi Silvas has attended the banquet since joining the foundation three years ago.

"Being a former athlete myself, I know how much time and hard work goes into juggling practice, games and school work," she said. "I am a big football fan. My father coached at San Jacinto for 20-plus years. My brother played all four years of high school and I was my father's statistician doing stats for him since junior high and for years after I graduated. After my dad retired from football, we were still involved."

Silvas said the highlight of the banquet was watching the young men stand in front of their peers and families, smiling and being honored for all their hard work. She said it was a blessing to honor the young men and to hear about all their accomplishments and how each and every one of them have given so much back to their communities.

She wants the scholar-athletes to know: "I wish you the best in all your endeavors – continue to strive to be great. God has blessed you to do great things."

As San Jacinto High School's head football coach for the past three years, Aric Galliano had the pleasure of nominating Kevin Maria, who has a 3.77 GPA and holds the school's long-jump record as a member of the track team in addition to his prowess on the gridiron as a punter, kicker and safety.

"He is one of the hardest working kids both academically and athletically," Galliano said.

He said that as a program, players receive weekly grade checks and he is honored that he has had a scholar-athlete recognized each year that he has served as head coach.

"The NFF does an amazing job in giving back to athletes through scholarships while emphasizing good citizenship and recognizing both athletic and academic achievement," Galliano said. "The Soboba Country Club is always an amazing venue to hold an event. The young men in their black-tie attire is an amazing thing to see as well; it's a night all about them and their overall achievements."

Mojado is a football fan and loves the LA Chargers.

"It was great to see such intelligent and athletic young men. I wish them well in their future ventures and in continuing their faith," she said. "I brought my son (Daniel Valdez Jr.) who is 11 years old with hopes to inspire him to play football and strive for good grades."

"It seems that they try a little more than the pros. They are trying to get to the next level and putting the time in to do so. It really is a brotherhood," he said. "Football has gotten a bad rap for years. People are now scrutinizing the dangers of all injuries that this sport has had in the past and present. This event represents the hard work that these young gentlemen produce for their four years of high school football."

On behalf of the Foundation he hopes the scholar-athletes will keep striving to be the best. Personally, he wants the students to know: "You have a great power when you are a football player. Being on campus, everyone looks to you as an idol – like it or not. Take the time to talk to that ‘weird, shy, loner kid' that always gets picked on and maybe things might change for the better for them." Reggie Doss, who played for 10 seasons with the LA Rams, awarded the Deacon Jones Scholarship to Robert Heiermann of Valley View High School, who was also selected to give a thank-you speech on behalf of his fellow scholar-athletes.

Guest speaker Glenn Martinez is in his eighth year as an Assistant Commissioner for the CIF Southern Section. He is the administrator in charge of football, boys and girls wrestling and baseball.

"What I miss most about being a coach is the day-to-day interaction with the players," he said. "An ex-player of mine I hadn't seen in a long time came up to thank me and I asked him why. He said I pushed him and never deterred any of his dreams and helped instill the morals and values he holds today. So my challenge to those being honored here – and deservedly so – is to go out and do something great; you are our future leaders."

In 2011, featured speaker Rob Wigod became Commissioner of Athletics for the CIF Southern Section, where he oversees an organization of 586 member high schools that offer 24 sports for boys and girls. He is only the ninth commissioner in the organization's 105- year history.

"This group of young men has accomplished so much. They've proven they can take care of business. This is what high school athletics is all about," Wigod said.

A former player, he started coaching football when he was 19. He said the sport had a significant impact on him and changed his life.

"I believe in what high school athletics does for young people," Wigod said. "We often hear about how divided we are (as a country) and how tough it can be to come together but I say just look at any high school sports team. They represent a bunch of different kids from diverse backgrounds who set aside personal goals and differences to be part of a team and pull together."

He said the 23 athletes being honored are notable examples of the best we have in high school athletics.

"We are counting on you to take what you learned from your parents, coaches, friends and family that helped mold and shape you and continue to make us proud as you continue moving forward," Wigod said. 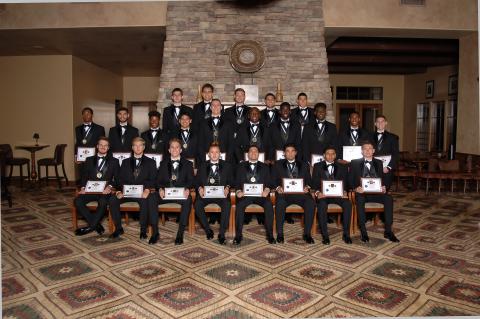 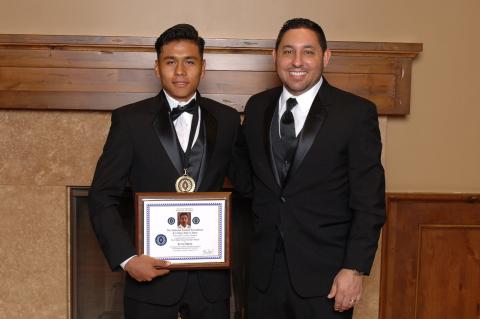 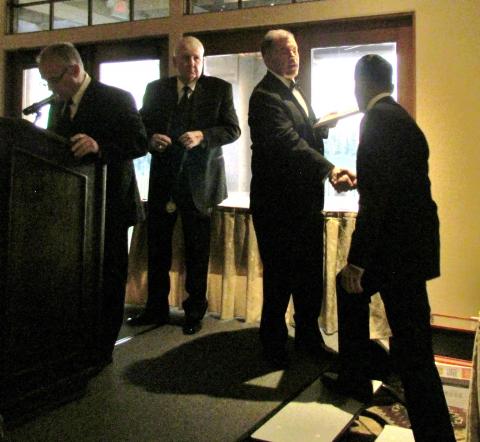 San Jacinto High School scholar-athlete Kevin Maria, right, is congratulated by NFF President Bill Powell as he takes the stage to receive his plaque and medallion at the scholar-athlete awards banquet on March 25 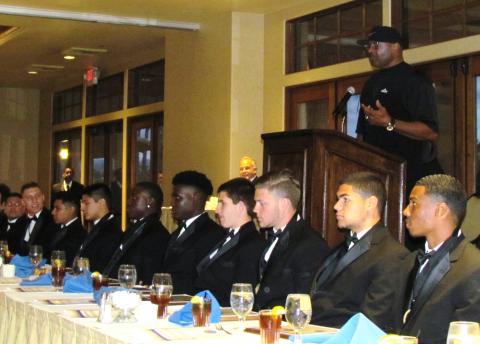 Former LA Rams football player, Reggie Doss, named the Deacon Jones Scholarship recipient as 23 scholar-athletes sat front and center during the NFF awards banquet in their honor at The Country Club at Soboba Springs on March 25