Hundreds turned out for the inaugural event ◆ By Mike Hiles

Long-time residents and newcomers joined together on the grounds of the Estudillo Mansion to celebrate the inaugural San Jacinto Heritage Festival on Saturday. The San Jacinto Unified School District partnered with the Hemet-San Jacinto Chamber of Commerce and the Soboba Band of Luiseño Indians to provide hundreds of guests with an overview of what makes this city so special.

Each school in the district had a booth set up with activities and historic or current information on what students are doing at their sites. Other vendors included the San Jacinto Museum that shares the mansion's grounds and the Cultural Department from Soboba's Cultural Resource Department.

Cultural Resource Specialist Jessica Valdez explained the significance of sage to Native Americans and offered bundles made from sage that grows freely on the Soboba reservation.

"It can be hung over the doorway to ward off negative energy," said Valdez, who has worked for the department for two and half years.

Cultural Resource Analyst Maria Lopez had another table at the Soboba booth that included a spoonful of chia "candy" made from seeds, honey, berries, almonds and sunflower seeds. She explained to guests the various health benefits of chia seeds and how they are harvested.

Jack and Nancy Warneke were happy to share San Jacinto Museum items with visitors, most notably artifacts and details about the 1937 Soviet Transpolar Landing in San Jacinto.

"We're having a great time here today," Nancy Warneke said. "We get to see people we haven't seen in a long time."

It also got them reminiscing about the large trees that were planted as saplings in the 1980s by Jack Warneke who has a master's degree in horticulture. South African sumacs, pepper trees, live oaks and eucalyptus trees dot the grounds and provided lots of shade.

The afternoon event wasn't all about the region's history – it was also about its future as San Jacinto Unified School District Superintendent Diane Perez praised the community support that has allowed each student in the district to be equipped with the necessary tools to be "21st Century ready."

"It started with Rose Salgado from Soboba ten-plus years ago, who insisted on quality education for Soboba natives," Perez said. "Soboba just signed an agreement so that for the first time in history, San Jacinto High School will have a swimming pool and be competitive with all other schools."

Soboba's Tribal Council Chairman Scott Cozart introduced a video about his tribe's history in the valley and the casino replacement and resort project set to open next year.

"I appreciate the opportunity to be here today and talk about Soboba's heritage," Cozart said. "Our heritage is not just things of the past but a way to help us remember our culture and traditions and to ensure that they are preserved in our vision for the future."

He told the crowd that his people, the Payomkawichum (People of the West), have lived in Southern California since the beginning of their creation.

"Despite attempts to wipe out indigenous people, we persisted and can proudly say that we are still here," Cozart continued. "We were eventually made to stay on the reservation and have gone through many trials since the reservation was established, including the loss of our groundwater and drought that lasted many decades. Our people still moved forward and made sure that our culture was always passed on."

He talked about his tribe's emphasis on education and how they continue to partner with the San Jacinto Unified School District on a regular basis to ensure the best for all students.

"We are proud to share our heritage with our valley neighbors, like we did today at our booth," Cozart said. "Cultural activities, like bird singing and basket weaving, are coming back strong for Soboba. We will ensure that our culture is remembered this way, so we can contribute to the proud heritage of the San Jacinto Valley."

Cozart said the past 20 years has proven to be successful due to gaming and that the revenue received not only benefits tribal members but helps preserve the tribe's cultural resources and support programs that keep tribal members self-reliant. It also allows them to give back to the community through the Soboba Foundation.

San Jacinto Mayor Pro-tem Alonso Ledezma presented a proclamation that said in part that "the history of the Soboba Band of Luiseño Indians, the first people of the San Jacinto Valley who faced many hardships, yet persevered and today are one of the largest supporters of our community."

Ledezma went on to read from the plaque: "Whereas, we don't want to forget the sacrifices of those that came before us, but rather we want to celebrate their successes, therefore the San Jacinto City Council proclaims October as Heritage Month."

The afternoon also included introduction of students from each of the seven elementary schools who won an essay contest where they had to write about their school's namesake whether it was Juan Bautista DeAnza, Edward Hyatt, Clayton Record or others.

Several local businesses that have been in operation for more than 25 years were honored by the Hemet-San Jacinto Chamber of Commerce for not only providing jobs in the community but also giving back in other ways.

Jerry Peebles, who served as one of the event's emcees and is a 15-year member of the San Jacinto Education Foundation, said he was pleased with the fact that so many entities came together for the event and is already looking forward to next year being bigger and better. 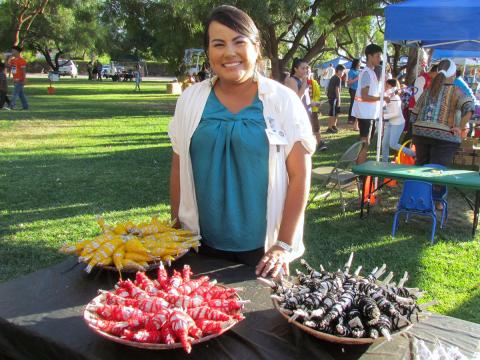 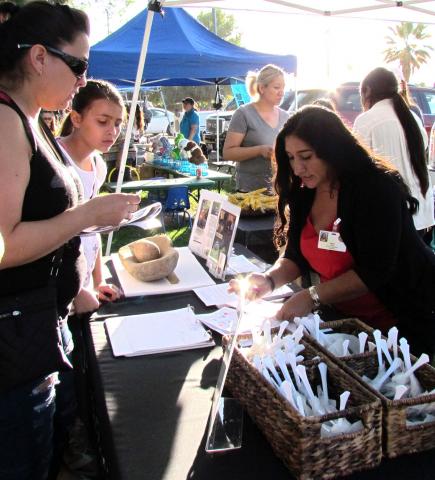 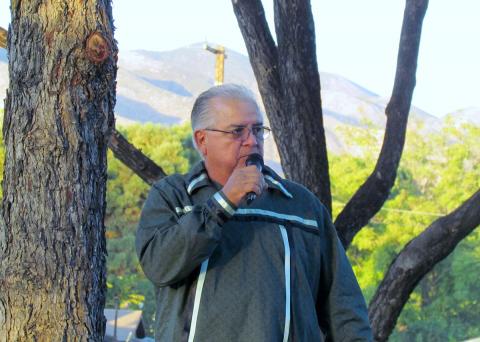 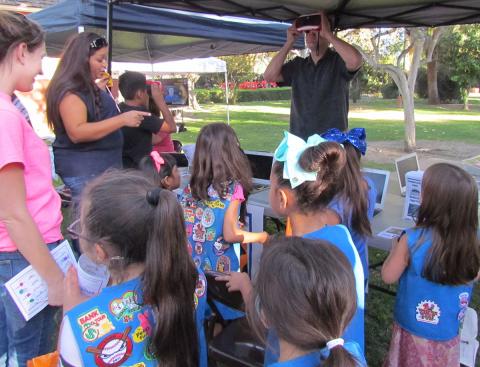 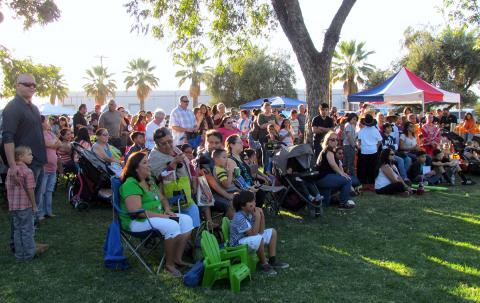 Guests gathered in front of the stage on the grounds of the Estudillo Mansion to watch performances, presentations and a movie during the San Jacinto Heritage Festival 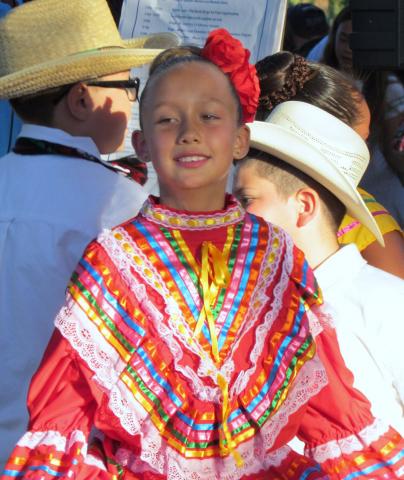 Mikaela Martin, 8, was one of the dancers from Megan Cope Elementary’s Dual Immersion Program that performed at the San Jacinto Heritage Festival. Her colorful dress was brought from Guatemala by her grandmother 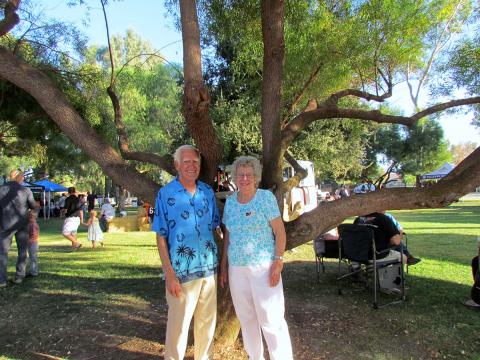 Jack and Nancy Warneke, longtime San Jacinto residents, stand near one of the many trees that Jack planted on the grounds of the Estudillo Mansion (and San Jacinto Museum) more than 30 years ago