Rose Salgado has always worked hard to make things better for those around her. Whether it is her fellow tribal members at the Soboba Band of Luiseño Indians reservation or those who live in the surrounding communities of San Jacinto and Hemet, Salgado has been part of many organizations that benefit others.

She doesn't get involved for the recognition or accolades, but she has received many over the years due to her successful and countless contributions. Salgado has twice received the 'Woman of the Year' Award from the Hemet/San Jacinto Chamber of Commerce. Her latest honor was bestowed by the Boy Scouts of America – 3 Peaks District when she was presented the 2017 Distinguished Citizen Award at a fundraising dinner on Oct. 19 at The Country Club at Soboba Springs.

"I was surprised when I learned that I was to receive this honor and I am so grateful to the Boy Scouts of America," Salgado said. "They are a wonderful organization and do so much for the youth of America."

Salgado, who grew up on the Soboba Reservation, credits her parents with instilling in her a great work ethic and teaching her to always be fair in dealing with people. Those who know Salgado know that her life was shaped by that advice.

After retiring from a 27-year career with Southern California Edison, Salgado devoted even more of her time to volunteerism. She has served on many boards of directors for nonprofits and educational agencies, including the San Jacinto Unified School District Board of Trustees, Chamber of Commerce, Education Foundation and the Western Science Center. In 2012, Salgado was elected to serve on the Valley-Wide Recreation and Park District board.

Her commitment to community was also evident in her tireless efforts to keep the Ramona outdoor play going during the economic downturn. At Thursday's event, Ramona Bowl Association board president Lori Van Arsdale delivered a powerful acknowledgment of Salgado's intervention to save the Bowl from bankruptcy during the recession when it looked like the pageant might not continue due to a lack of funding. Van Arsdale also spoke of Salgado's efforts to bring back the First Nighter's dinners at the old Hemet Stock Farm.

During her acceptance speech for the award Salgado spoke frankly and optimistically about her most recent bout with cancer.

"I know that my family was praying for me, my friends were praying for me and I even prayed for myself. God gave me my life," she said, because she had unfinished business to take care of.

From November 2014 until January of 2016, Rose had to take time off from her many obligations and appointments to tend to health issues stemming from another bout with Stage IV cancer. She credits her family, friends and faith as the reason she has been able to endure her battle when the disease surfaced again earlier this year.

"I will be able to feel the wind and know in my heart that my faith, family and friends are the reason I am able to be here," Salgado said.

She is grateful she can continue her dedication to serving her Tribe and the community by being actively involved and bringing awareness to both. She has served the tribe for many years on the Tribal Council, and currently holds the Sergeant-at-Arms position.

Salgado has a history of giving of herself, both on and off the reservation, and will always be seen as a pillar of goodness, kindness and humility well into the future.

"I have a very different outlook on life: I want to live it to the fullest and be fulfilled with no regrets," Salgado said. "My life has been dedicated to helping and giving to others." 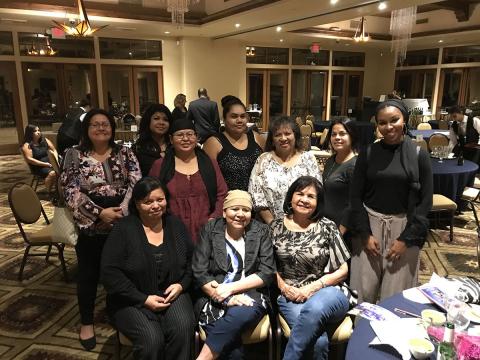 Rose Salgado, front row center, is joined by her family to celebrate receiving the Boy Scouts of America –2017 Distinguished Citizen Award on Oct. 19 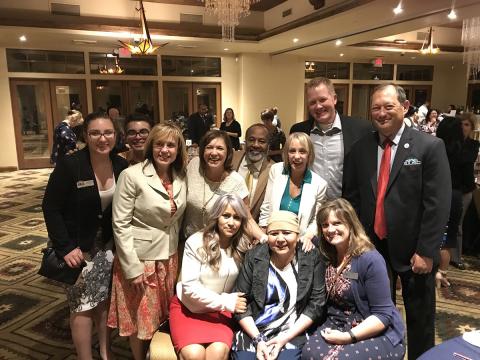 Boy Scouts of America's 2017 Distinguished Citizen Rose Salgado, front row center, is congratulated by community leaders at the event in her honor on Oct. 19 at The Country Club at Soboba Springs