The Noli Indian Girls Volleyball team played their first game of the Warrior League season on August 21 against River Springs Magnolia at the Soboba Sports Complex. The majority of team members (9) are sophomores, with two freshmen, one junior and one senior. Coach Andrea Helms-Sanchez said having a "young" team makes them more coachable and more willing to learn.

"They are go-getters and work well together as a team," said Helms-Sanchez, who has coached the volleyball team for three years. She is also the school's lead campus supervisor and SRO (School Resource Officer) and a sworn officer with the Soboba Department of Public Safety.

The team practices every day during seventh period and after school (on non-game days). Most of the girls are multi-sport athletes.

Stepping up to help out the team are Assistant Coach Brian Savage who works in Campus Security at Noli and Alyssa Soza, who graduated from the school in June.

"Alyssa comes out to our practices to help the girls," Helms-Sanchez said. She also plans to attend as many games as she can to give tips and pep talks to the players.

Senior Ceyleah Rose Matthews joined the team because she loves the sport of volleyball and plays any position where she is needed.

"I would love to play volleyball in college," said Ceyleah, 18. "I was on the team in my freshman and sophomore years. The only thing different this year is all the new girls. I contribute leadership skills to the team and feel that I need to perfect diving for the ball."

Team Captain Tanya Rivera is a sophomore who played on last year's team.

"This season we are doing more workouts and practicing more," said Tanya, 14, who joined the team because she likes the sport and wants to improve her communication skills. She also plays on the school's softball team.

Freshman Caitlyn Briones joined to try out a new sport and is willing to play any position her coaches put her in. She also plays softball.

"I feel I need to perfect everything at this point, since this is my first time playing the game," said Caitlyn, 14.

The team has 16 games in its season, playing multiple times against six different schools in the Warrior League. Approximately half of the games will be home games, played at the Soboba Sports Complex, adjacent to the Noli Indian School Campus.

"We will try and do our best this year," said Helms-Sanchez, who has played Rez Volleyball in the past. 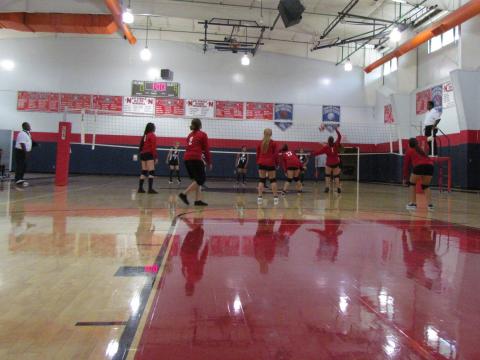 The Noli Indian Girls Volleyball team played its first game of the season against River Springs Magnolia at the Soboba Sports Complex on Aug. 21 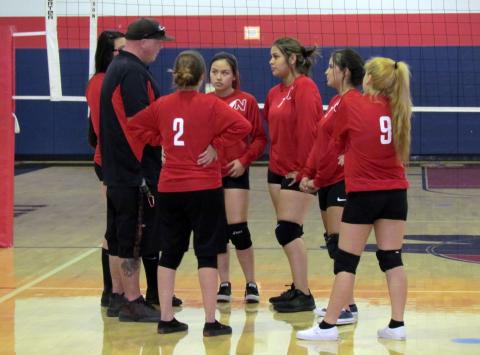 Assistant Coach Brian Savage gives the volleyball team a pep talk before their first game at home on Aug. 21

Members of the Noli Indian Girls Volleyball team warm up before their first game of the season on Aug. 21 at the Soboba Sports Complex 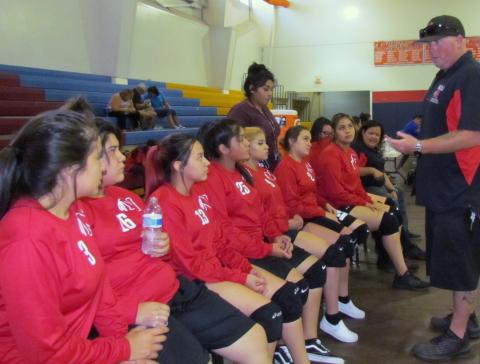