Students in middle and high school grades who are enrolled in the AVID (Advancement Via Individual Determination) program were tasked with creating a story about superheroes. After the stories were written and illustrated and put together in the form of a storybook, they visited the Soboba Tribal Preschool to share their tales.

On March 3, middle school students Luisa Rivera, Paakishla Valenzuella, Damien Vega and Maritza Zaragoza visited all the classrooms to read to the young children. High School students visited on other days to do the same.

“They were asked to create a story to highlight how anyone can make a difference after learning about young people who are superstars for their humanitarian advocacy,” said Elizabeth Alford LaCella, who teaches English and coordinates the AVID program.

“They were asked to come up with a super strength such as saving our oceans from pollution and then present the message in a way that would be understandable at a preschool level.”

Rivera’s story, “Paa’ila and Friends Recycle,” was about turtle friends of Sonny Island who found something shiny and colorful in the ocean where they lived. Paa’ila and friends told their schoolteacher, Miss Starfish, what they had found and she said if they found more they should remove it from the ocean. While taking the trash they found to the shore, a baby raccoon named Charlie agreed to help and found a big basket they could put the trash into. The story reflected how working together for a common goal can be fun if you do it with your friends – even new ones.

Valenzuella created a story about a boy named Pablo who tries to make friends but is bullied because he is new to the town. But the next day he returned to the park and one of the boys sat with him and they got along fine. The other kids joined them, and they all became friends. The story showed that it only takes one person to show kindness towards another and then it will spread.

Vega wrote about “The Plastic Bottle” and how a boy named Todd saw a plastic bottle floating down the river near his home and removed it because he knew it could harm the fish. After seeing this happen a few more times, Todd went in search of the source of the bottles. When he saw a man tossing them into the river, he explained why it was not a good idea and the man realized he should recycle instead of disposing of his plastic bottles into the water. Todd shared his experience with his mom and they started a group to help educate the public through posters explaining the harm plastic does to ocean life.

Zaragoza incorporated some Spanish language lessons into her book about feeding the hungry. As Katie the dinosaur was walking home, she met some terribly thin dinosaurs who were craving some tasty leaf burritos. She asked her mom to make some extras that she could share with them the next day. The hungry dinosaurs were so grateful that Katie had the idea of working with her mom to create the “Feed the Hungry Foundation” from their own kitchen.

On March 4, Alford instructed freshmen students on real world employment skills and how attitude, attire and eye contact are key to a successful interview. Students were given the opportunity to test those skills on March 4 when they met with community members who acted as employers and posed questions to them about their experience and qualifications for the job.

Applications were completed based on job descriptions for either a host/hostess or groundskeeper at the Soboba springs Golf Course. In the process of completing the applications during class, Alford encouraged students to relate activities they have already done to the current job they were seeking. Helping family members with yard cleanup and other outdoor maintenance would be considered pertinent and taking part in community service shows a willingness to be friendly and helpful to others.

Alford and Wesley Snyder, who teaches English and serves as Senior Advisor, joined forces to educate sophomores on the importance of working together as a team and presenting to an audience. Students were broken into four groups of four who were asked to create a business and then produce a visual representation of a home page for its website. They were given about 15 minutes to complete the project and showed much creativity.

One group created a new soda and called it Exotic Pop, with a nod to its most popular flavor of Lemon Zest. Other businesses were a family medical practice, a clothing company Top $helf and the Freshkix shoe company.

Business Manager Genna Santini, part of Noli’s administrative staff, pitched in to help with the freshmen and sophomore projects. 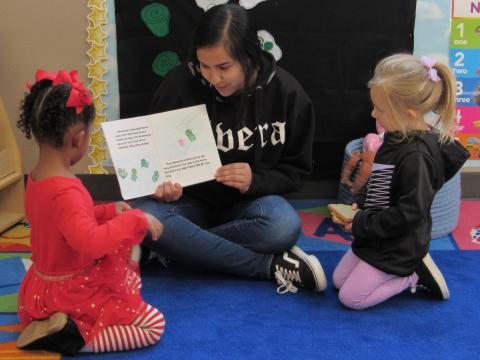 Damien Vega, left, reads his story about keeping plastic out of our oceans and Paakishla Valenzuella reads what he wrote about zero tolerance for bullying 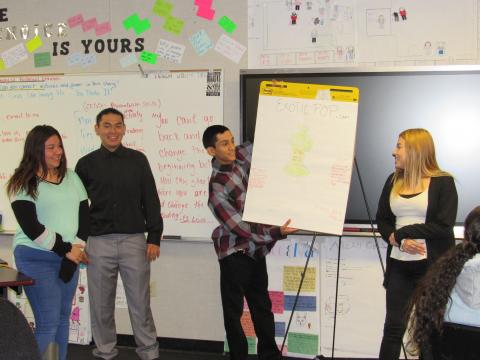 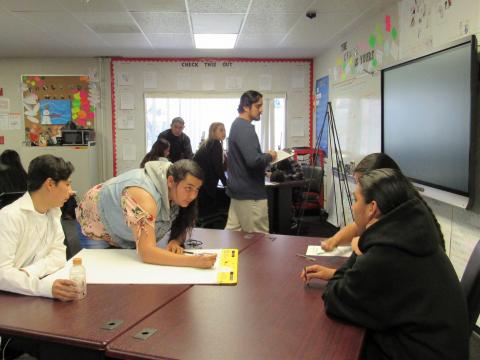 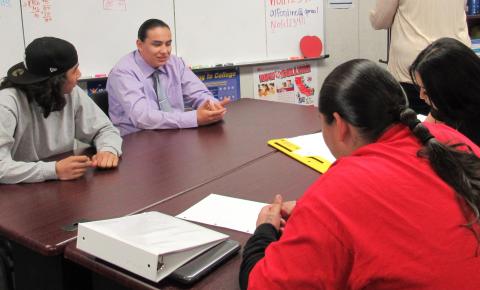 Tasked with developing a business and creating a visual representation of it’s website homepage, a group of students worked together on details for its Top $helf clothing company