While local schools are experiencing closed campuses and utilizing distance learning for their students, Noli Indian School at the Soboba Band of Luiseño Indians Reservation has taken steps to ensure that its daily curriculum is kept as normal as possible. To that end, Cultural Teacher Tashina Ornelas has kept students moving along in their studies and projects online.

“As a school, I believe we still hold the value of our culture program as a priority, just as we do for our other elective courses,” she said. “We are fortunate to understand the need students have for all the courses for various reasons.”

Prior to the unprecedented situation our schools are facing, Ornelas and some of her students had discussions about making camp dresses for 13 kindergarten girls at Soboba’s Tribal Preschool. Several ninth graders volunteered earlier in the school year to do this and the skirts were delivered in early March to the excited children.

Ornelas, who has been creating and facilitating her own culture programs at Noli for about 15 years, met with the participating high schoolers during their 18-minute daily advisory period. Soboba Tribal Members who made skirts were Leila Arres, Iyana “Tot” Briones, Tatiana “Roo” Briones, Bella Resvaloso, Destiny Salgado and Faith Vega. Others were Anisa Brañe of Mesa Grande and Lakota Bates of Torres Martinez.

The first step included measuring all the kindergarten girls and finding out their favorite colors. After fabric and ribbon was purchased, it took about a week to cut all fabric to size. Pinning took another week or two and sewing hems took one to two weeks, depending on the student’s experience.

“Once hems were sewn, we laid the ribbon which took another week,” Ornelas explained. “(Hand) sewing ribbon is more challenging so this took about two weeks. Then the elastic was added, which only took a day or two. Sewing up the skirt is the last step.” Overall, it can take anywhere from two to six weeks to complete a skirt based on the time allotted for the project, experience of the dressmaker and mental space.

“I teach some particular family protocols as well, so if girls are not in the correct mental space, they do not work on the skirt which adds time. The process of gifting takes all our energy and we owe it to be positive. If we cannot be positive, we don’t work. To work in such negativity would be bad medicine,” Ornelas said. “A few of the girls came in on their own time or after school so it’s hard to say how long it actually took to make each skirt.”

No previous knowledge of sewing was needed but the more experienced sewers felt more confident to jump right in. “I thought it was a good way to teach the little ones about carrying on traditions,” said Leila Arres, 14, who has made skirts before. “It was a lot of fun to work on them; I made four.”

She said when they delivered the skirts, the little girls were so excited.

“They loved them and didn’t want to take them off,” Leila said.

Bella Resvaloso, 14, said she thought all the dresses turned out really pretty and was happy to work together with her classmates to learn how to make them.

“I decided to get involved because I think it’s a good thing for our culture and our past history,” said Faith Vega, 14. “I saw my niece at the preschool, and she was so proud of me.”

Anisa Brañe said her goal while making the dresses was to create something that would make the young girls happy. This is her second year participating in the collaborative program.

“They were waiting for us when we got to the school shouting ‘our skirts are here’ – it was cool,” said Anisa, 16.

Ornelas, who has been overseeing the dressmaking program for more than five years, said her methods and choices of topics are family based – it is what she has been taught by her family and what they practice. She shares her family’s ways and beliefs, being sure to explain that it is surely not the only way but gives the students perspective that allows for open conversations.

“I am what we call Húu’unikat which in a general term translates to ‘teacher’ in Luiseño,” she said. “I share with the students how I was taught by my family including protocols/rituals. Since I am sharing my family’s way and they are learning under me, it’s expected that they carry on the tradition as I have guided them. Now of course if their family has a particular set way they do it, then of course I would expect them to follow their own family’s protocols/traditions.”

As Noli’s Culture Department Coordinator, Ornelas facilitates cultural programs through Indian Education for children of many communities. She has taught in various capacities for TANF and the Soboba Cultural Resource Department during her 15 years teaching at Noli.

“Culture for the most part does not come from a book,” she said. “It is living and breathing. Culture is Life. It is the essence of traditions/customs.”

Ornelas enjoys the dressmaking program as a way to share knowledge, make and learn from mistakes and build positive relationships with youth of different ages. All materials are either purchased by the preschool or Ornelas and sometimes is donated by community members or community groups.

“Truthfully, it is difficult to teach at a distance because I do love hands-on collaborative approaches but it is because of that I know we must protect our students so we have something to return to in the near future,” she said. “Perhaps it will create even more of a respect for honoring and passing on our traditions.” 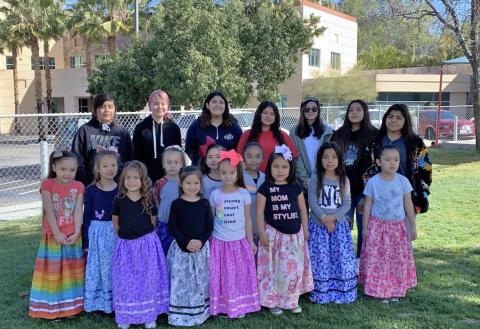 High school students from Noli Indian School made camp dresses for Soboba Tribal Preschool kindergarten students. The collaborative project between the two schools has been in place for about five years 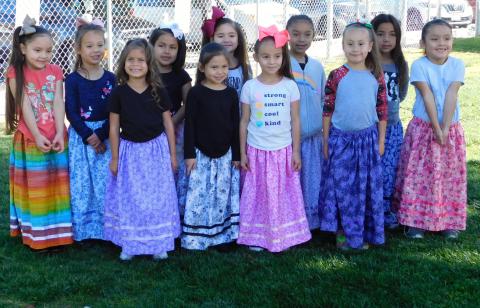 Rihanna Kashersky, left, and Marilyn Mendoza show off their new camp dresses while Tulóvat Témanxwanvish, in background, plays in hers