Noli Indian School Graduates Reflect on the Past

Fourteen seniors set goals for their futures ◆ By Mike Hiles

As proud family members and friends watched, 14 Noli Indian School seniors made their way to the stage at the Soboba Outdoor Arena on June 6 to participate in the commencement ceremony that marked the end of one of life's chapters and the beginning of another.

Each graduate walked across the stage to a pre-recorded personalized message that reflected on the time they spent as students at the school that serves grades six through 12. They included thank yous, a favorite memory and a meaningful quote.

Juliana Briones, from the Soboba Band of Luiseño Indians, said she enjoyed playing volleyball in her junior year and is headed to The Art Institutes to study culinary arts. After completing college, she hopes to work at Soboba as a head chef. Her favorite quote is from George Bernard Shaw: "Life isn't about finding yourself. Life is about creating yourself."

Noli's salutatorian, Evelyn Modesto, is also from Soboba and was a student there throughout her high school years. She plans to attend Mt. San Jacinto College and her favorite quote is something her brother always told her: "Go with the flow."

Soboba's Desiree Smestad started at Noli in sixth grade and enjoyed playing on the softball team that made it to CIF playoffs, saying it was always fun. Her higher education goals include studying nursing at MSJC before continuing her education to become a trauma surgeon.

"Noli gave me the opportunity to grow and continue to set goals for myself and my son," Desiree said.

After all graduates had been self-introduced and made their way to their seats, Noli's counselor and culture teacher Kim Marcus led a blessing and traditional bird songs to celebrate the students going forward in their lives.

Graduates sat on both sides of the raised stage while school officials, school board members and Soboba Tribal Council members sat behind the podium where Master of Ceremonies Clyde Miller welcomed everyone and introduced the event's guest speaker.

"Judge Sunshine Sykes is an example to Native Americans everywhere," Miller said. "She is the first Native American appointed to the Riverside County bench."

Sykes, who is a Navajo from Tuba City, Arizona and part of the Coyote Pass Clan, directed her speech to the seniors.

"Never forget who you are and your ancestors that came before you – your roots will stick with you forever," she said. "You must always remember those who have come before you and the struggles they endured and the sacrifices they made for you to be here today in this moment. Let their wisdom, history and sacrifices guide you."

Sykes' grandparents met at Sherman Indian School at a time when it was a boarding school to assimilate Native American youth into a more European culture. Her great-grandmother didn't want her sons (which included Sykes' grandfather) to attend Sherman as she wanted to raise them in the Navajo tradition. She felt the "white world" as she called it was too fast, too distant and too different from the Navajo way of life.

Sykes' grandmother had a different experience with Sherman Indian School as her mother believed it was an opportunity for her daughter to get an education, learn English and adapt to a world that was changing. These two lives had different journeys that were similar in that they were not allowed to wear clothing that depicted their Native heritage, nor could they practice traditions, speak their own language or see their families.

"I think of how fortunate I am, and how fortunate my daughters are, to have the opportunity to attend school, to gain an education without the turmoil my grandparents had to endure," Sykes said. "I know each of you has a next chapter in your life – just off on the horizon. Use what you learn to help your communities and your tribes. Give back to the people who helped shape and support you. Don't forget all those that had a hand in shaping you into who you are today. Don't forget your history and the chains – both physical and mental – put onto generations before you that you can now break free from."

Sykes explained that during her grandparents' era, Native Americans were taught to believe they could only work to serve others and not aspire to become doctors, engineers or have any professional careers.

"Fast forward only two generations later and I stand before you as a graduate of Stanford University, Stanford Law School and as the first Native American judge ever appointed to Riverside County," Sykes said. "This is a testament to the sacrifice and struggle of those before me and that is progress. You too can be part of that progress."

Sykes encouraged Noli graduates to pursue their dreams using a saying from Navajo Chief Manuelito who said: "Education is the ladder – tell our people to take it." She told the seniors to climb that ladder and when they reach the top to turn around and bring someone else up with them because people are always stronger when they stand together.

Valedictorian Violet Chacon, from San Juan Southern Paiute Tribe, is headed to Northern Arizona University. In her speech to fellow graduates she told them to "visualize your goals and trust yourself" and to "have the courage to follow your heart."

"Just be fearless in the pursuit of what sets your soul on fire," she said. 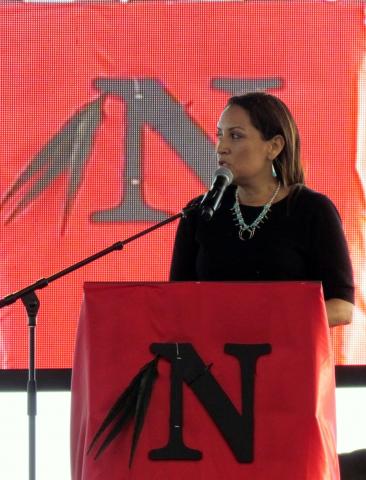 Noli Indian School valedictorian Violet Chacon speaks at the Class of 2018 commencement on June 6 while Noli Principal Donovan Post and counselor Clyde Miller, at right, and others listen 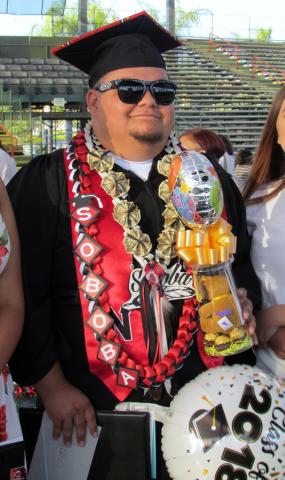