The second half of the school year has been strange for students across the country but seniors at the Soboba Band of Luiseño Indians’ Noli Indian School persevered to earn their diplomas. A tribal parade is planned for later this month and a formal commencement ceremony is being organized for August, but students were able to pick up their well-earned sheepskins on June 3.

“We invited the students to stop by the school from 9 a.m. to 3 p.m. and be personally congratulated by staff, administration and school board members,” board president Antonia Venegas said. “We want them to know how proud we are of their accomplishments in spite of not being able to have in-person classes since mid-March.”

Noli serves Native American students in grades six through 12 and eighth-grade students being promoted to high school were also honored. Principal Donovan Post joined others in personally delivering a promotion certificate, a yard sign and a memorabilia package to each of their homes on June 2. Those promoted were Jesse Cruz, Ahon No Wes Dailey, Luisa Rivera, Raymond Russell, Leandro “Andy” Silvas and Damien Vega, all from Soboba; Suzette Almada from San Juan; Alexander Brane from Mesa Grande of Diegueno; Max Hernandez from Morongo; Franciso “Frankie” Leyva and Maritza Zaragoza-Castellano from Los Coyotes; and Faith Salgado and Anthony Salgado from Cahuilla.

“Making it through middle school is no small feat,” Post said in a videotaped message posted on the school’s website. “This is not the way we wanted to celebrate but not even a worldwide pandemic can stop us from celebrating with you now.”

Richard Moreno, who teaches science and English to middle school students, said the memorabilia packages included gifts from Noli teachers, administration and the school board. He said the mobile pomp and circumstance unit observed all social-distancing protocols as provided by the CDC and the state of California.

“While this celebration will mark the end of your middle school chapter, it is the beginning of your high school journey, and the continuation of your lifelong learning endeavor,” he said.
Venegas and fellow board members Lucille Briones, Mike Placencia, Sandy Boniface and Stacia Maciel also created goody bags for the students and had banners made for each of them. They all understood the extra effort it took on the part of the students, their families and the teachers to make sure that everyone stayed focused while not physically on campus.

“The biggest challenge was figuring out what worked for online learning and what didn’t,” Venegas said. “We made sure everyone had access to the Internet and provided printouts for those that struggled with online learning.”

She said many staff and school board members checked in with the students on a one-on-one basis making sure they were okay.

“And they all came together to make sure the students were celebrated for their accomplishments,” Venegas said.

Lucille Briones has been on the school board for 18 years and said she was concerned about the impact on students that were not able to be in their classrooms each day.

“The staff and administration really stepped up with the eighth-grade promotion visits,” she said. “I know students felt left out not getting a recognition ceremony. And our seniors missed out on prom, grad night, senior events and most importantly, a graduation ceremony.”

Board member Michael Placencia had just been elected to the board again when the school was closed on March 16 and said it has been a challenge for him to get back on the same page with everything being done so differently.

“The staff came together for the students and the seniors finished all their work to ensure they could graduate on time,” he said. 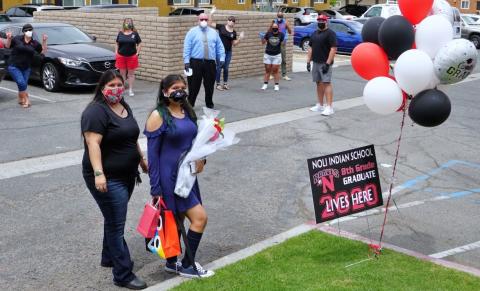 Noli Indian School staff visited eighth-grader Maritza Zaragoza-Castellano in person to present her with a certificate, a yard sign, a memorabilia bag and more to commemorate her promotion to high school on June 2 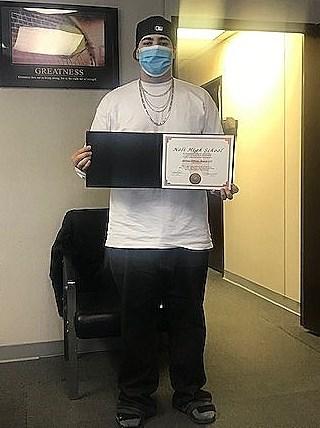 Lawrence Modesto was one of 15 seniors to pick up his diploma at Noli Indian School on June 3. He was the Class of 2020’s salutatorian 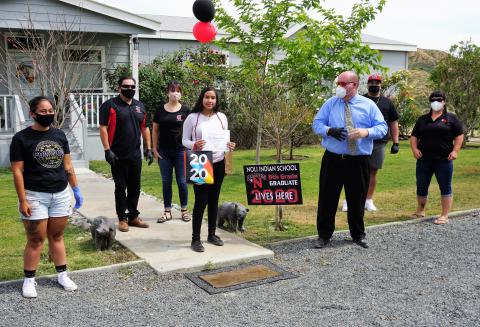 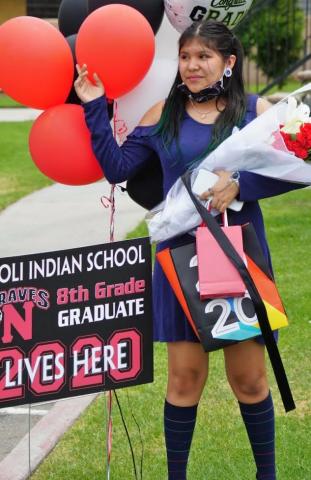