Homecoming game is set for Oct. 20 in San Jacinto ◆ By Mike Hiles

Noli Indian School Head Coach Clyde Miller is working with 14 returning players and seven newcomers this season and is looking forward to an exciting season.

"The majority of players have never played organized tackle football when they come to Noli. Of the seven newcomers, one has played before," Miller said.

The team has been working together on weight training and other readiness activities since last December. Games have begun and Homecoming is set for Oct. 20 against the Riverside County Office of Education at San Jacinto Valley Academy.

In its first of four home games on Sept. 1, the Noli Braves lost to first-time opponents: the Julian High School Eagles.

"I believe that we are a talented, young team," Miller said. "As coaches, we prepared them as much as we could. They didn't see a play that we didn't cover in practice but there is no substitute for experience."

Miller, who is also the school's academic counselor, is starting his sixth season as the football team's head coach.

"I coached in 2002 when Noli had not won any games and we went to the playoffs that season," he said. "Then I came back to coach in 2011 as an assistant and the next year took over as head coach."

He has been stressing the following strategies to the players.

"We need to limit our mistakes and get each player to buy into the concept of just doing their job and not trying to do too much or win the game on every play," he said. "The biggest challenge I anticipate this season is our lack of experience."

Aside from winning, his goals for the team are straightforward.

"We are establishing a good base of expectations," Miller said. "Football is a great game to use as an example for life. My goal is that if each player could go on to live their life the way that they approach football, I think that we would have a bright future for these young men."

Senior Jaycob Tewawina plays offensive and defensive line. He is from the Agua Caliente Band of Cahuilla Indians.

"Coach likes to move me around a little on the defensive line but I'm the starting center on offensive line," said Jaycob, 17, of Banning.

He has been playing football for Coach Miller since he began attending Noli Indian School three years ago.

"I like football because I'm a part of something bigger than myself; it's really the bond with my teammates that I like most," Jaycob said. "We have a lot of young guys coming up from middle school who are now freshmen that have really impressed me. They are really physical for their age."

He also plays baseball but to prepare for football season he practices and does off-season conditioning. To stay in shape for games Jaycob says, "Coach has us run and then run, and then run a little more."

"On offense, I start at guard and on defense I play D-Tackle," said Lawrence, 15, who lives on the Soboba Band of Luiseño Indians Reservation.

He began attending Noli in sixth grade and is playing varsity football for the second season. He played middle school flag football at Noli but had not played tackle football before.

"I like the sport because I grew up with it; I always had fun playing with my cousins and teammates," said Lawrence, who also plays baseball and basketball.

To prepare himself for football season, he attended every single practice, hit the weight room and practices during the off-season.

"We have a young team loaded with talent; we just have to put it together and get everyone to commit to winning," Lawrence said. "Every single practice I go as hard as I can. I study my playbook and scouting report. Every Monday Coach Miller has us run at least 16 100-yard sprints."

The season consists of about 10 regular games and one to three playoff games. The team represents six Native American tribes, with most players being from Soboba. They practice every non-game day. 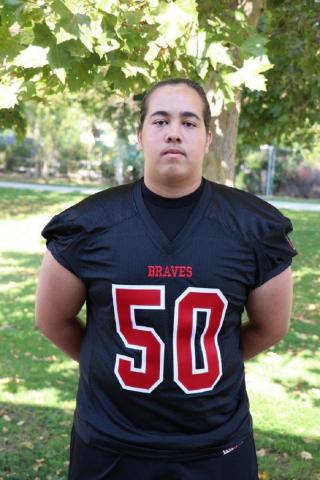