With an open invitation to anyone that wanted to attend, Soboba’s Youth Council, in collaboration with its Parks and Recreation Department, organized a gathering in support of Missing and Murdered Indigenous Women’s Day on May 5.

About 100 visitors, including bird singers and dancers, met at the Soboba Sports Complex to bring awareness to the Missing and Murdered Indigenous Women and Girls (MMIWG) crisis in America. Soboba Youth Council provided tables and chairs for all guests at the outdoor event. They also set up a table with enough fried chicken, sandwiches, potatoes, fresh fruit, chips, dessert items and cold beverages for everyone.

Noel Alvarez led bird singers in social songs for about an hour, starting with a welcome song sung half in the Cahuilla language and half in the Luiseño language.

Research has shown that Indigenous women are 10 times more likely to be murdered than any other demographic. According to the Centers for Disease Control and Prevention, homicide is the third leading cause of death among those aged 10-24 and the fifth leading cause of death for Indigenous women between the ages of 25 and 34. An Urban Indian Health Institute (UIHI) report revealed that 84% of perpetrators were men and nearly half were non-Native.

Additionally, the National Crime Information Center reported that of the 5,712 cases of MMIWG (in 2016), only 116 of these cases were logged into the Department of Justice’s database. Most of these murders were committed by non-Native people on Native-owned land. The lack of communication combined with jurisdictional issues between state, local, and tribal law enforcement, make it nearly impossible to begin the investigative process. For this reason and because Indigenous women are sometimes mistaken for other races or members of tribes not Federally recognized, these rates are thought to be much higher.

A resolution designating May 5 as the “National Day of Awareness for Missing and Murdered Native Women and Girls” was passed by the U.S. Congress and Senate in 2019. It honors Hanna Harris (Northern Cheyenne) who went missing and was found murdered on the Cheyenne Reservation in July 2013. The Indigenous community and their allies wear red and gather to remember and continue to raise awareness of the crisis.

In November of 2019, President Donald J. Trump signed an executive order establishing a federal task force to address the nationwide crisis of missing and murdered Indigenous women. The executive order also called for education and outreach campaigns for affected communities, a public awareness campaign in partnership with NamUs, a missing person database and better use of existing criminal databases.

The hashtags #MMIW and #MMIWG2 were created to give voice to women whose stories have not been heard and the hashtags have become increasingly prevalent on social media in North America.

Staff at Soboba Department of Public Safety showed their support by wearing red t-shirts with the cause’s logo for an entire week while on duty. The department also flew an MMIW flag at its offices near the old casino in San Jacinto.

Soboba DPS Lead Officer Vanessa Peralta said she hasn’t seen this issue as a problem at the Soboba Reservation where she has worked for nearly four years, but she knows it has been prevalent throughout Native Country for a long time. DPS staff is trained to do investigations and assist Riverside Sheriff’s Office for any reports.

Indigenous women and communities have been working diligently to demand justice and accountability from perpetrators for the victims and their families. The MMIWG movement is the embodiment of Indigenous resilience, strength and kinship. 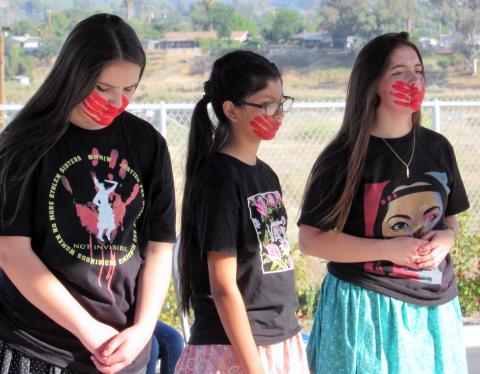 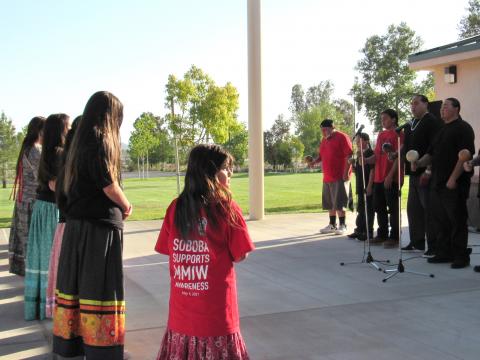 Bird singers and dancers gathered at Soboba Sports Complex to support the MMIW cause on May 5, which is designated as Missing and Murdered Indigenous Women’s Day 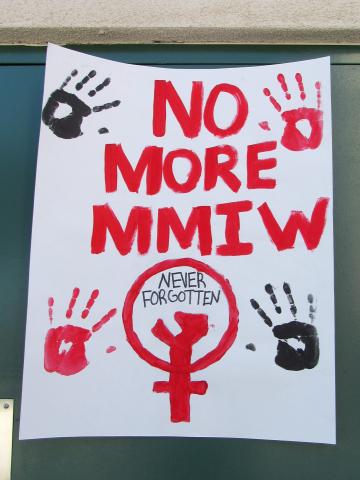 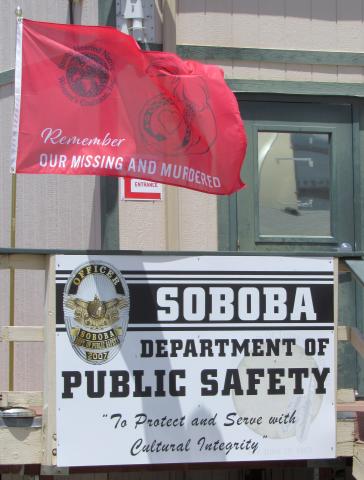 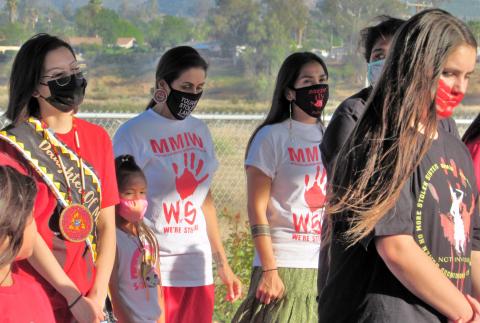 Bird dancers at Soboba on May 5, designated as Missing and Murdered Indigenous Women’s Day 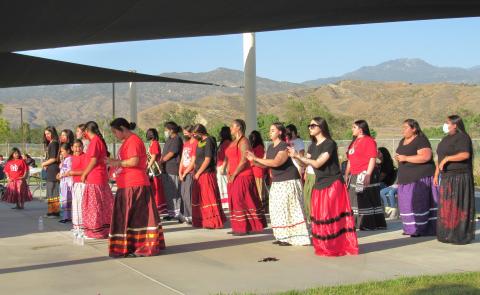 Bird dancers at Soboba’s Sports Complex on May 5