The sold-out audience at AC's Lounge at the Soboba Casino on Friday night was treated to quite a show as performers took the stage to compete in the 11th annual Soboba Foundation & Soboba Casino Lip Sync Contest. With a total of $10,000 awarded to local nonprofits, the acts were well-rehearsed and gave it their all. Mere points separated the top acts.

MC Andrew Vallejos said the annual event has provided more than $55,000 to participants throughout the years. His co-host, Mia Basquez, works for the Soboba Band of Luiseño Indians as an administrative assistant and enjoys helping people. For many years, Vallejos co-hosted the show with Rose Salgado who decided to retire and become a permanent judge for the event. She also opened the show with her own lip sync performance of "At Last" by Etta James.

Other judges were Steven Estrada, Michelle Modesto and Julie Arrietta-Parcero.

Emerging as the overall winner and leaving with a check for $5,000 was a foursome representing Up, Down N' Dirty 4 A Cure Mud Run, an American Cancer Society event scheduled for July 14 at Perris Auto Speedway. Not only was the "boy band" spot on with lip synching to a medley of Top 40 hits such as "Uptown Funk," their precise dance moves had everyone screaming for more – and the group delivered.

Before their performance that brought the house down, glow sticks were handed out to the audience. These props were not needed to excite the crowd that sang along with the band.

"On behalf of all the females here tonight, thank you," judge Modesto said. "Whenever I thought it was going to end, another great song came on."

Cathi Hill, Community Development Manager for the West Region of American Cancer Society Inc., said she didn't know exactly what to expect going into the show. She also was there to cheer on the entry for Relay for Life/American Cancer Society, which received the "Rose's Choice" award and $500. It was a solo act by Ryan Johnson who performed Bon Jovi's "Living on a Prayer."

"I'm going into show night with my fingers and toes crossed that my performers will take home the prizes," Hill said beforehand. After the three-hour show ended she said she couldn't have been prouder of her guys.

Vallejos said the competition had been fierce among the entries and he was glad to see all of them take away some money to support their nonprofit efforts.

Second place and $2,500 was awarded to Tahquitz High School Cheer Program who is seeking funds to compete at the UCA National High School Cheerleading Championships in Florida next school year. Cheer moms and coaches Michael and Sarah Peterson put on a sexy show with a mash-up of popular songs.

"As a former cheerleader, I have to say you had some really hot moves," audience member Lori VanArsdale said. Judge Estrada commended the group for invoking great audience participation.

San Jacinto Unified School District earned $1,500 for its third-place finish after about 25 staff members participated in "Carpool Karaoke" with a medley of hits from recognizable performers such as Tina Turner and David Bowie. Superintendent Diane Perez said the funds will help support students and families in need during the year.

"We got involved not only to raise money but also to bring us together to focus on the heart of SJUSD, which is about nurturing and growing our team so that our kids benefit from a healthy and happy staff," she said. "While we are in it to win it, we count it all joy because it's for our kids."

Fourth Place and $1,000 went to last year's winners, the Ramona Bowl Amphitheatre for "Save a Horse, Ride a Cowboy" song-and-dance number courtesy of Frank Jaramillo and a team of "Ramona" cast members including cowboys, Spanish dancers and Red Tail Spirit dancers.

Miguel Sarasa is executive director of T.H.E. Center in Hemet and performed with T.H.E. Center program director Michelle Kerlin to present "Time of My Life" from the film "Dirty Dancing." They received the "Andrew's Choice" award and $500. Sarasa also helped other nonprofits by performing for Kiwanis Club of Hemet (Best Choreography and $500), Valley Queens Scholarship Foundation (Best Costumes and $500) and Lions Clubs of the Valley (Most Original and $500).

Soboba Tribal Council Vice Chairman Isaiah Vivanco said: "Whenever Miguel is on stage he brings it in his own little way."

"I think Joey Valentino was amazing," judge Salgado said of the Valley Queens' performance of "Vogue" in which Valentino took the Madonna lead. "His lip sync was right on. I usually watch Miguel but this time my eyes were on Joey."

Sarasa said that all winnings will support operations of the groups involved and that the biggest challenge was working around everyone's schedules in order to rehearse with them all.

"Soboba does so much for our community and this event is a fun opportunity to get everyone involved and bring awareness to the various causes that work so hard in our community," he said. "I have a passion for community service and sadly, service organizations are struggling for membership and younger adults need to step up to the plate and help ensure the future of our clubs."

Other $500 recipients were Hemet-San Jacinto Council PTA for "Best Song" with Miranda Lambert's "Little Red Wagon" and San Jacinto Education Foundation for "Best Props" that included a replica of the San Jacinto Mountains and its lit up "S" as a tribute to former longtime coach and San Jacinto High School alumnus, the late Charlie "B-Bop" Silvas. 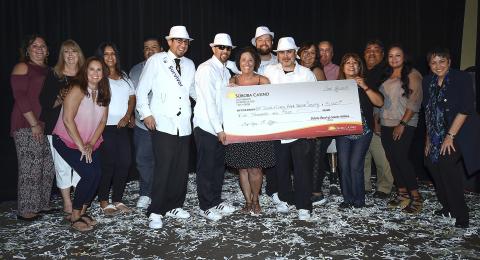 First place winners at the Soboba Foundation & Soboba Casino 11th annual Lip Sync Contest are congratulated by Soboba Tribal Council members, Soboba Foundation members and others as they receive the top prize of $5,000 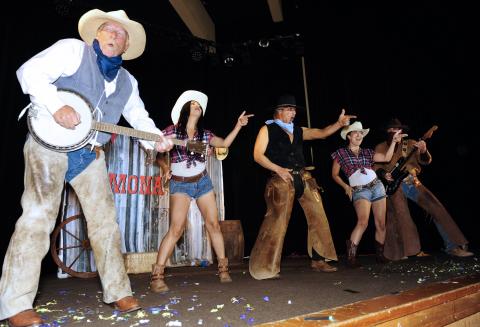 Rose Salgado, a permanent judge and former co-host of the Soboba Foundation & Soboba Casino Lip Sync Contest opened the show with a lip sync of Etta James' "At Last" 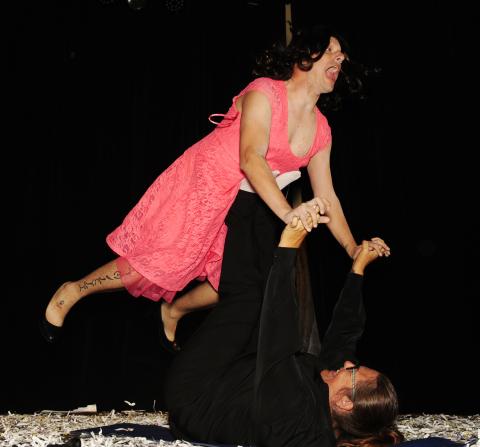