Fun And Funds Are Elevated At Soboba Lip Sync Contest

The dozen nonprofits who took to the Soboba Casino Resort Event Center stage for the 13th annual Lip Sync Contest presented by the Soboba Foundation and Soboba Casino Resort were greeted by an enthusiastic sold-out audience and double the winnings they were expecting. Host and emcee Andrew Vallejos kept the night moving with big laughs and crowd cheers of his own.

Heading into the competition on Aug. 20, participants were expecting to receive $5,000 for first place, $2,500 for second, $1,500 for third, $1,000 for fourth and $500 each for the rest. After the first few acts showed they had put a lot of thought, time and effort into their performances, the Soboba Foundation board members decided they deserved more and doubled each payout.

The judges had a tough time ranking the acts as each one offered great themes, talented “singers” and dancers, and amazing energy. Monica Herrera served many years on the Soboba Tribal Council and the Soboba Foundation Board and is an experienced advocate for others. Bella da Ball, a recipient of a star on the Palm Springs Walk of Stars, is widely recognized for her work as a champion of human rights. Debby Alexander owned and operated the iconic Peabody’s Cafe and Bar in Palm Springs for over 28 years and has hosted many events in support of charities. Comedian Amy Ashton has appeared on HBO Comedy Central and is a regular at major comedy clubs. She also speaks and performs empowerment comedy to inspire and entertain kids at schools across California.

The first-place prize of $10,000 was awarded to American Cancer Society-Relay for Life with their “boy band” pop mash-up. Members of this year’s talented group were Andre DeJesus of Apple Valley, DJ Cordova of Victorville, Daniel Aponte Jr. of Menifee, Sam Gutierrez of Fontana and Ralph Conley of Beaumont. They practiced every week for the past four months via Webex to accommodate their day jobs and the distance between them.

After their crowd-pleasing act, judge Debby Alexander asked them when their first tour date was going to be. Amy Ashton said the performance was “professional from beginning to end.” Bella da Ball said they “blew it out of the water.”

Second place of $5,000 was won by American Legion Post 53, performing “Candy Man” by Christina Aguilera. Bella said, “I love Big Band music and I love Swing and you had so much fun up there.” Monica Herrera said, “You had really good moves and I loved the ending.”

San Jacinto Unified School District, with its salute to KISS, earned third place and $3,000. Bella said their performance was “extra super fabulous” and “over the top” with great costumes and energy. Debby said, “I’m a little impartial because I’m part of the KISS Nation and I’ve had a pair of platform shoes.”

MilVet, a nonprofit that provides military and veteran support services, took home $2,000 for its fourth-place finish. A rousing patriotic blend of songs that ended with Lee Greenwood’s “God Bless the USA” had the crowd waving mini flags that MilVet had provided to all the guests. Many audience members were on their feet by the end, saluting the large flag being waved on stage. Monica said, “You did an awesome job. That last song was so touching and meaningful; it always makes me want to cry.” Bella said the dramatic patriotic songs were beautiful, adding “Thank you for bringing your energy and message to all of us.” Amy said, “You did make me cry. Thank you for doing this – it was very spiritual and made us realize that there are things that are bigger than us.” Debby pointed out that “the crowd was moved by that song because of how you presented it.” Vallejos said the performance pointed out that even if we have problems and disagree about something, “we can come together in the end.”

All other participants received specialty awards and $1,000 each. Most Original was given to Valley Community Pantry who partnered with Cloverlane Foundation to present “I Will Follow Him” from the Sister Act movie. Judge Amy said, “This was A-level entertainment that kept us going.”

Most Creative was Rotary Club of Hemet who took on George Clinton’s “Atomic Dog.” Competing for the first time, Bella complimented them for having a group of 12 people “pulling together and working on such a great song.”

Ramona Bowl Amphitheatre, which has been part of the Lip Sync Contest since its inception, received “Most Spirited” for its take on Lakeside’s “Fantastic Voyage” using a Pirates of the Caribbean theme. “I really enjoyed the combination of pirates and disco together – they will be forever together in my mind,” Debby said.

Best Props were awarded to T.H.E. Center for its fun rendition of “We Are” from the Ice Age movie. Amy said, “I like the way you represented every different background and brought us all together with your entertaining and lovely performance.”

Let Them Be Little Feline Rescue, another first-time participant, was given “Best Costumes” for its “Stray Cat Strut” performance. Amy thought the group performed at “Broadway level” and should be very proud of themselves.

Best Song choice went to the San Jacinto Education Foundation for its Meatloaf ballad of “Paradise by the Dashboard Light,” which was expertly “sung” by Scott Cozart and Jerry Peebles with some assistance by Evan Pagay.

The Miss Hemet/Miss San Jacinto Scholarship Program, which performed after a brief intermission in the three-hour show, got Most Dramatic for their salute to Britney Spears.

The Greater San Jacinto Chamber of Commerce earned Most Entertaining for “Girls Just Want to Have Fun” and they certainly did. As the final act of the program, they were given a thumbs up for their 80s-era costumes and for having so much fun.

“I always enjoy a night out with my family and we had such a great time,” Soboba Foundation President Dondi Silvas said. “It was great to see everyone in the room having so much fun, too. And knowing that it was all in support of such worthy local nonprofits is just the best feeling."

Soboba Foundation Vice President Catherine “Cat” Modesto said she was happy to see all the entries “stepping up their game” and was glad to see such a good turnout. Sally Moreno-Ortiz serves as Soboba Tribal Council Secretary and is a member-at-large for the Foundation and said the event was “fun and entertaining and Andrew did an awesome job.” She felt “KISS rocked it” and enjoyed the performance by MilVet.

Joey Placencia assisted Vallejos by taking comments from the audience after each performance. Everyone seemed to enjoy the show and had positive things to say, even about those that were competing against the nonprofit there were there to support.

Monica Herrera said she was happy to be part of the contest and felt like all the groups took it seriously this year, which made it more competitive. “Everything was meaningful especially with everything that’s going on in our country right now,” she said.

Soboba’s Rose Salgado pioneered the Lip Sync Contest in 2008 to unite the community in a fun and competitive spirit of giving to those in need. Although she passed away earlier this year, she was remembered by many throughout the night. Rose was instrumental in the creation of the Soboba Foundation as well. She wanted to help her people contribute to neighboring communities by way of sponsorships for their special events and programs. The annual Lip Sync Contest quickly became a must-see show that sold out every summer. The performances became more elaborate, the rewards became greater, and the entertainment value went through the roof.

Linda Krupa performed with the Rotary Club of Hemet because she promised Rose she would, San Jacinto Unified School District gave a shout-out to Rose who has supported its many programs and projects for so long and Herrera said she was missing Rose.

“It’s not the same without her here but I’m sure she’s proud of how much it’s grown,” she said. “I think she would have liked the line up we had tonight and the overall outcome.” 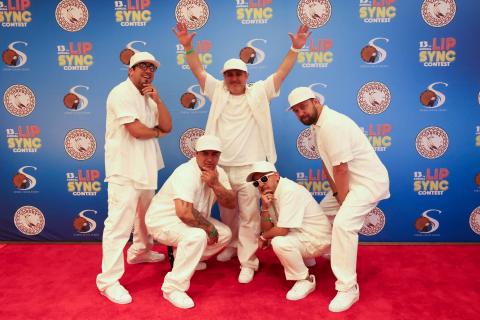 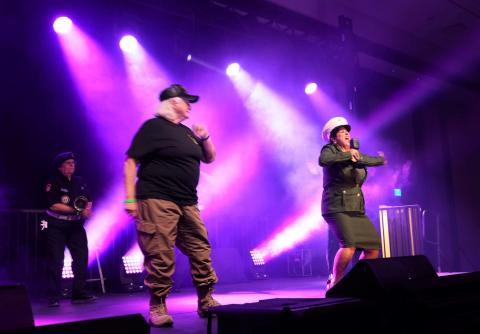 American Legion Post 53 wowed the crowd and the judges at the 13th annual Soboba Foundation and Soboba Casino Resort Lip Sync contest and were awarded second place and $5,000 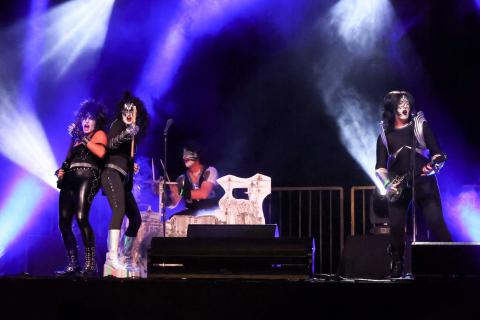 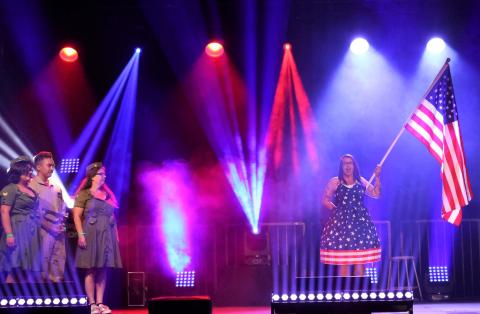 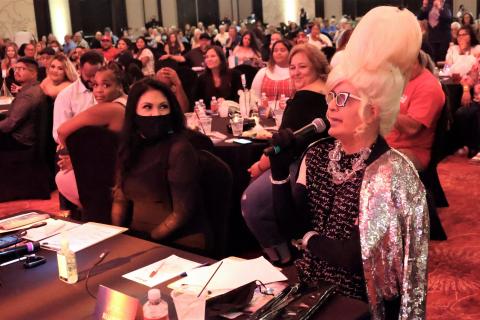 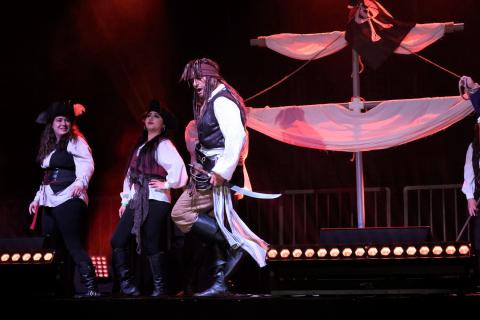 Ramona Bowl Amphitheatre kicked off the show with a Pirates of the Caribbean themed performance, featuring Frank Jaramillo, center 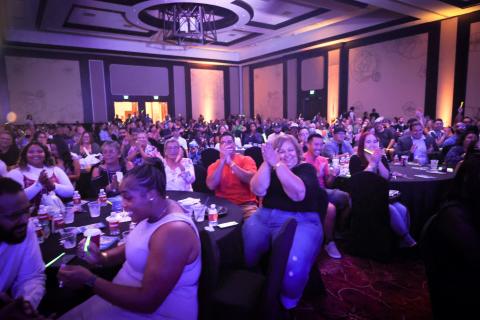 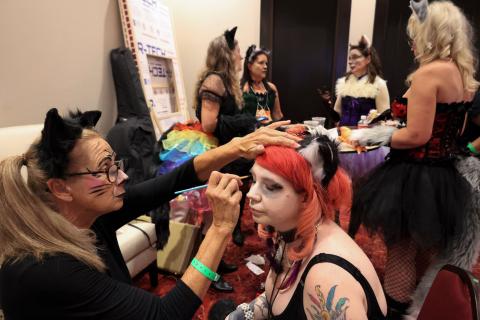 Members of the nonprofit Let Them Be Little Feline Rescue prep for their upcoming performance in the 13th annual Lip Sync Contest at the Soboba Casino Resort Event Center on Aug. 20 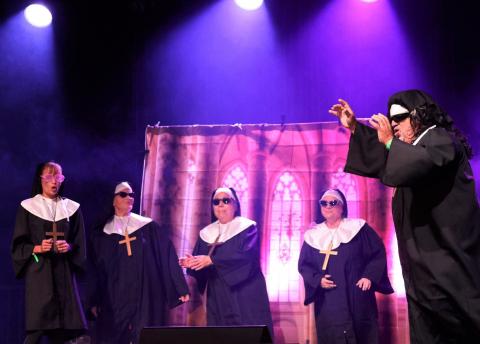 Jim Lineberger, at right, leads the group for Valley Community Pantry’s “Most Original” performance of “I Will Follow Him” from the movie Sister Act