San Marcos, CA – California State University, San Marcos implemented an American Indian Studies (AIS) bachelor’s degree program in 2017 but has already produced its first graduate. Rachelle Lee Peterson started her college career as a Kinesiology major with an AIS minor but switched her major to Human Development with an emphasis on counseling. When AIS became a major for the first time at San Marcos and Peterson realized she only needed a handful of additional classes to complete the degree requirements, she declared it as her second major.

“CSUSM has the largest number of American Indian students per capita of any institution of higher learning in the state,” said Joely Proudfit, Director of the California Indian Culture & Sovereignty Center (CICSC) on campus. “We couldn’t be prouder of Rachelle – she was a perfect representation of the first AIS major graduate.”

Peterson graduated from Hemet High School in 2014 but when she became a full-time student at CSUSM, she found herself homesick for the Soboba Indian Reservation.

“Attending college was the first time I had ever been away from home so in the beginning it was difficult for me,” said Peterson, 22. “I am the first in my family to graduate from a university which meant I had to figure out a lot of things on my own.”

She admits that she would not have made it this far without all the people who supported her throughout her journey, especially her parents and siblings.

“I have had the best support standing behind me every step of the way and I will always be grateful for them,” Peterson said.

Peterson learned about the lack of resources and overall medical attention Indigenous people have available to them across the United States, which resulted in her change of majors in her third year.

“I started to become more educated about mental health issues, especially involving people in Indian Country,” she said. “Our people are constantly being ignored by the general public and I realized how important it was for me to help create change. I have always felt a responsibility to take my knowledge back to Indian Country and do something positive with it.”

As a member of the campus’ American Indian Student Alliance (AISA) she was given a platform to reach a bigger and new population of people that could be educated on issues surrounding Indian Country. Meetings were held at the CICSC on campus, which became a home away from home for her and other members.

“I became Chair of AISA during my last two years at CSUSM and I am proud that my younger sister, Raven, will be taking my place next semester as the new president now that I’ve graduated,” Peterson said.

Her plans are to attend graduate school to earn her master’s degree in school psychology with an ultimate career goal of being a school psychologist working with American Indian high school students.

Peterson said one of the best lessons she learned was that knowledge is power and it can never be taken from you.

“No matter your circumstances or where you come from, always believe in yourself, never be afraid to fail and never stop fighting,” she said. “As Indian people we have to take care of each other. An educated Indian is a powerful Indian.” 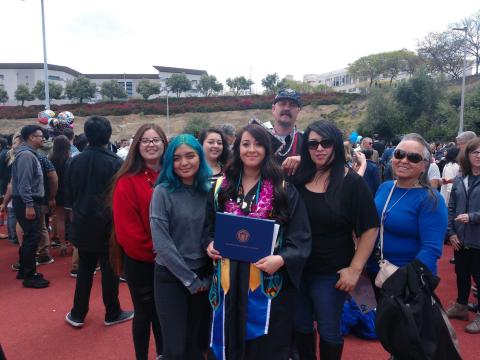 Rachelle Peterson holds her diploma surrounded by parents, grandparents and siblings after her graduation from California State University, San Marcos on May 17. Rachelle is the first student to graduate with a B.A. in American Indian Studies, a new program for the school 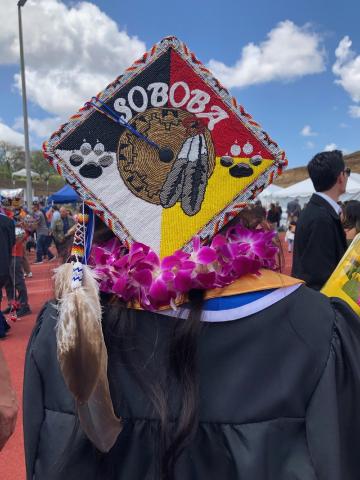 Rachelle Peterson proudly wears a mortarboard that carries traditional beadwork done by her mother, Michelle Morillo, and all the Eagle feathers her mother gifted her with from preschool promotion through college graduation from Cal State University, San Marcos on May 17 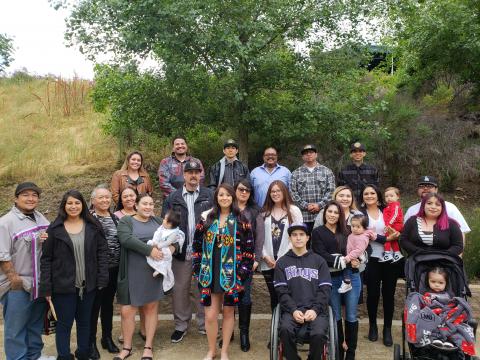 Rachelle Peterson and members of her family after her graduation from Cal State, San Marcos on May 17. She graduated with bachelor’s degrees in American Indian Studies and Human Development with an emphasis on Counseling