About 600 employees will be hired ◆ By Mike Hiles

Looking to be part of the Soboba Casino Resort family, potential employees started arriving before 6 a.m. for a job fair on Nov. 26 that was scheduled from 9 a.m. to 1 p.m. at the Soboba Springs Golf Course. Cars lined Soboba Road in and around the facility. Those not able to find parking spaces were directed to the existing Soboba Casino about half a mile away and were shuttled to the golf course venue.

More than 1,000 eager contenders waited in a line that curled around the building in a serpentine fashion to maximize the space needed to accommodate all that showed up. Once inside the building they were directed to the next phase by Zachary Morin, who has worked at the Soboba Casino for more than three years and is currently a supervisor in the slots department. He said it’s been exciting to see the construction of the replacement casino while driving to work each day.

“We processed a total of 878 applicants,” said Gloria Baron, Human Resources Director. “I would say approximately 50 percent made it to the interview, but it is very hard to determine this because we had departments do meet-and-greet with applicants and schedule interviews for a later date.”

Many of those were for management and supervisory positions, which require a more in-depth interview. Some departments were making offers on the spot. Staff arrived about 7 a.m. to set up the area to prepare for the fast-paced process, trying to serve as many applicants as possible.

About 40 members of the management teams from every department, along with a Human Resources team of eight, volunteered to assist in the process.

Two rooms were set up for interviews that were divided by departments such as food and beverage or hotel service. Directed to the supervisor of the area they were hoping to be hired for, the 164 applicants who made the cut on Monday were directed to an outside balcony area overlooking the golf course – and the never-ending line of potential employees below them. HR Benefits Representative Ana Alcaraz was one of several employees who congratulated those who were made an offer of employment and explained the next step in the hiring process.

Ricardo Gutierrez had just completed an employment contract so he is currently unemployed. The Menifee resident was hired on Monday as a line cook. Shiseida Duro was hired as a cage cashier.

“I wanted to do something new and exciting,” said Duro, of Banning, who had previously worked at the Morongo Casino in Cabazon.

The last stop of the day was to learn about the extensive background check that is done to become licensed by the Soboba Tribal Gaming Commission, required for all casino employees. Applicants need to supply 10 years of residential history as well as 10 years of work experience with references and a detailed financial report.

Sean Salazar of Moreno Valley was willing to take any job, with hopes of being a bartender one day. He was hired as a banquet server based on his previous four and one-half years as a server.

“I got here about 7:45 and there were already about 80 people in line,” said Salazar, 21, who waited to be called into the Licensing Division’s room.

David Plentyhawk, also 21, has been a food server for about a year and was happy to get offered a job doing similar work at the new resort.

“I heard about all the opportunities and was looking for something busier and livelier,” said Plentyhawk, of Moreno Valley.

Blanca Sanchez was looking for a bigger and better placement than the restaurant she has been at for the past three years. She arrived at 8:20 a.m. and was pleased her interview went well.

Baron said that based on her 14 years of experience working at Soboba, approximately 70 percent of potential employees pass the background investigations.

Licensing Supervisor Mirna Contreras was one of five workers processing the potential employees. It took about 15 minutes to go over the packet with each group of three who were then called to a table to schedule a face-to-face interview with an investigator. 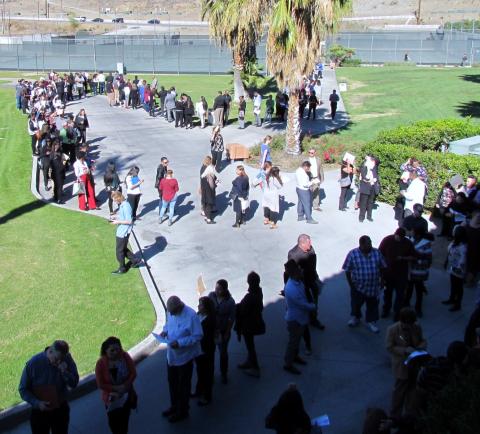 More than 1,000 job seekers attended a job fair on Nov. 26 for the Soboba Casino Resort, set to open in the new year 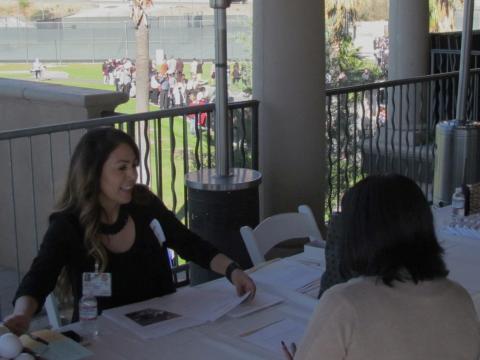 Ana Alcaraz, left, congratulates Shiseida Duro on receiving an offer of employment at the Soboba Casino Resort Job Fair while other potential employees wait in line on Nov. 26 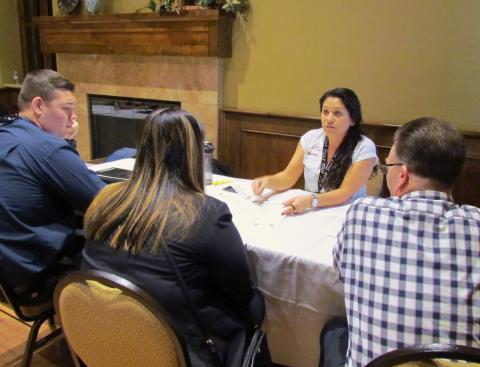 Mirna Contreras, who works for the Licensing Division of the Soboba Tribal Gaming Commission, takes questions from potential employees who were made offers of employment at the Soboba Casino Resort Job Fair on Nov. 26