Dr. Seuss is a Favorite Among Soboba Preschoolers

They ate green eggs and ham, they made hats and bowties just like the “Cat” and they wrote down rhyming words on their papers. These are just some of the things that culminated a week of Dr. Seuss related activities at the Soboba Tribal Preschool in honor of the famed children’s book author, who was born March 2, 1904.

“Being that Dr. Seuss is a familiar icon to most parents, we use his birthday to encourage literacy in the home by hosting our annual Scholastic Book Fair during his birthday week,” Preschool Director Dianne King said. “Our book fair sales were down a bit from last year, but we still received a profit of $573.00 in books just for hosting the sale. The best part is that we helped to build some home libraries.”

Teachers and aides began preparation for the events in mid-February. Each classroom chose a Dr. Seuss book to decorate its door. The two-year-olds used “Horton Hears a Who,” the preschool classroom door highlighted “Oh, The Places You’ll Go,” the Pre-K class chose “The ABC Book” which tells about the magic you can find inside of a book and the Kindergarten class focused on “Fox in Socks” as their theme for the entire school year is about being as clever as a fox.

“Every teacher dressed up as their favorite character,” King said. “Cindy Lee and Antonio Venegas from the kindergarten class wore fox ears and long red fox tails as their costume.”

During a full week of activities, having fun just made learning and skill mastering that much easier for the students. The preschool class had shaving cream with green plastic eggs for sensory. King said they were able to recycle Easter eggs from the year before.

The kids made fish bowls in art and glued colored fish crackers on them after reading “One Fish, Two Fish, Red Fish, Blue Fish,” which provided a perfect counting/math game for the day.

In her classroom for three-year-olds, teacher Melissa Arviso made labels for each of the colors with the English word for it alongside the Luiseño word for it so students could learn both.

For a cooking project, the kids made green eggs and ham. King said they seemed to enjoy making the dish more than eating the colored eggs.

Kindergarteners incorporated community helpers into their literacy lesson. They created their own Whoville village. Each child picked a job for Whoville. They were given boxes, cardboard tubes and miscellaneous recyclables to create a project at home with their family. Once they brought the completed project back to school, the town was set up for display. Then, one by one, each child stood up and shared who their Whoville community helper was and what their job was in the town. Louisa Martin, the mother of Anthony Torres said that she was a little intimidated by the project in the beginning but with the help of another family member, they started getting really creative with Anthony’s Whoville house and the scientist that lived in it. She had to get out the Christmas box of wrapping paper and bows to create a holiday house for Whoville.

On March 1, each room spent the day with “The Cat in the Hat.” The Pre-K class made Cat in the Hat kabobs. They were each given bananas and strawberries cut into slices and put on a wooden skewer to match the cat’s famous red and white striped hat pattern. At another table, with the help of parent Scarlet Valenzuella, the children made “hats” with red Lifesaver candies and white icing on top of an Oreo cookie base. They had to alternate the red candies and enough white icing piped onto it to create the proper pattern.

At their sensory table, they enjoyed being messy with Cat in the Hat dough. It was made of flour, oil and glitter to give it that “magical” touch. The Cat in the Hat enjoyed making messes so the day was all about having fun and getting messy.

The kindergarten students had to trace the outline of a bowtie onto red construction paper and then cut it out and attach it to a collar for their “Cat in the Hat” bowtie. They also had to cut and glue red stripes onto the long white piece of paper they were given to fashion their hats from.

King said her favorite Seuss book is “Oh, The Places You’ll Go” because so many curriculum ideas can be incorporated around it such as world travel, transportation, motivational goals and dreams.

“The story of a hot air balloon that can take you anywhere you want to go is just magical,” she said.

A new Dr. Seuss book is scheduled to be released in the fall. About 80 percent completed at the time of his death in 1991, the book revolves around art and its importance in our world. Maybe it will find its way into the Soboba Tribal Preschool curriculum for Dr. Seuss’ birthday celebration next year. 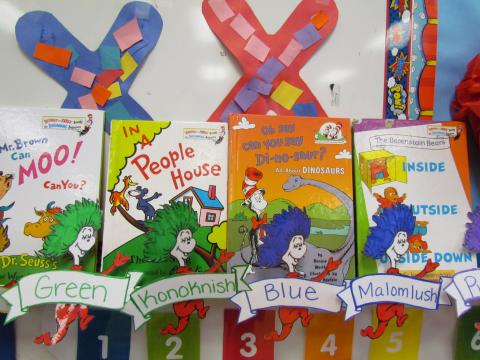 Soboba Tribal Preschool students learn their colors in English and Luiseño as part of the Dr. Seuss birthday celebration week 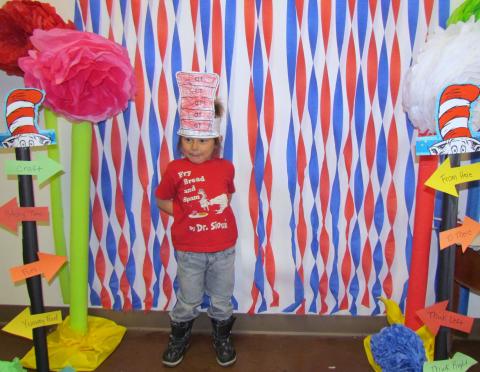 Tuukut Adame wears a Native American play on Dr. Seuss at the photo booth set up during a weeklong celebration of the famed children’s author at the Soboba Tribal Preschool 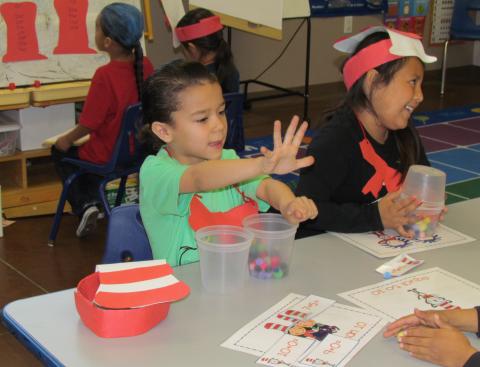 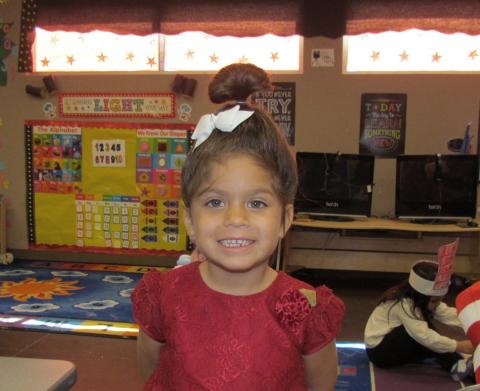 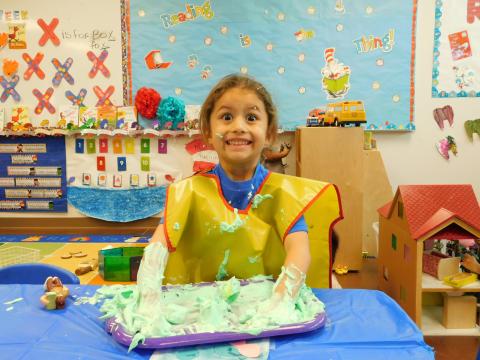 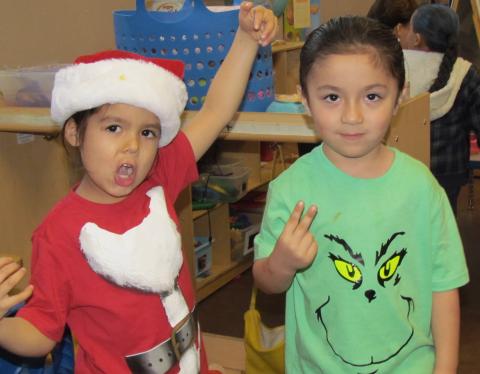 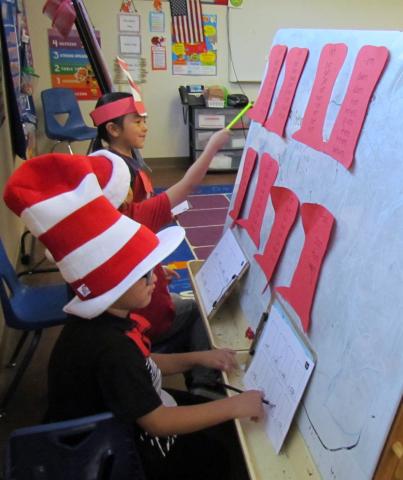