Made possible by Soboba Tribal TANF, the annual SYA program focuses on culture, leadership, higher education, wellness, prevention and community service. This year’s event was from June 17 through July 24 and included 20 youths from Soboba Band of Luiseño

Indians with others being from the Cahuilla Band of Indians, the Santa Rosa Band of Cahuilla Indians and the city of Riverside.

Regional Prevention Manager Harold Arres said whether the youths had attended previous academies or if this was their first time, they all had to attend mandatory classes during the first week. These included an anti-bullying workshop, team-building activities and a visit from motivational speaker Joseph Matthews of the Morongo Band of Mission Indians who spoke about building a healthy relationship with the Creator.

Field trips for eligible participants included a visit to Catalina Island after a tour of the Aquarium of the Pacific and Queen Mary in Long Beach at the end of June. The three-day, two-night excursion at Catalina included hiking, snorkeling, kayaking and exploration of nature. It was a SYA highlight for many including Soboba’s Ronald Morillo and Luisa Rivera.

July 2 found the group working in collaboration with Soboba’s Tribal Environmental Department and Public Works departments for a community clean-up day. Elders signed up if they needed help with items to be hauled away and the youths pitched in. On July 16, they went to the Jr. American Indian Chamber of Commerce Youth EXPO at Agua Caliente Resort in Rancho Mirage.

Soboba’s Hattie Arres, 15, enjoyed the cooking segments that were offered on July 11 and thought this year’s participants interacted well with each other and were very friendly.

Everyone enjoys a trip to Disneyland but SYA attendees got the bonus of seeing the park as part of the Disney Youth Education Series. The three-hour leadership experience on July 21 enabled them to discover Walt Disney’s secret to making dreams come true.

Students learned how to develop their own leadership legacy, become confident in their ability to accomplish goals and be motivated to achieve the impossible. They were challenged to discover their personal brand, develop core values, have the courage to step out of their comfort zones and understand the importance of diversity as they explored the park and experienced exciting attractions.

“There were Disney cast members who were very energetic and explained that you have seven seconds to give a first impression,” said Ariana Caratachea, an intern with the Soboba Tribal TANF program. “The topic was ‘Creating a Leadership Legacy’ and they were asking the kids what they wanted to be known for and what words they would use to express themselves and characterize themselves.”

She said the lessons were tied to different Disney characters to help the youths relate to the concepts, such as Belle from Beauty and the Beast representing intelligence and the Lion King’s Mufasa signifying strength.

During the academy’s final week, youths were taught the basics of arrow making with Tony Soares, who had also led a pottery-making workshop the previous week. Caratachea and other adults from the program assisted the youths when and where needed, encouraging them to ask questions as the lessons progressed.

Soares has been teaching Native American techniques for about 25 years at many reservations and schools. He has been making pottery and arrowheads since he was very young after making trips to many Southwest museums and ruins with his grandmother and great aunt.

For his workshop at Soboba, the students were taught how to make big pinch pots using puki bowls, which he said is more of a Pueblo method.

“The kids did great; it does take a few tries to learn the language of clay,” said Soares, 50. The Joshua Tree resident has made a movie about paddle and anvil pottery, available on YouTube at TonySoaresNativeClays.

For the arrow-making class, some chose to make them out of carrizo cane or arrowweed and others chose a more modern material – wooden dowels, which could be painted. While students used sandpaper and other methods to prepare the wood, Soares explained how it was traditionally done, using rocks.

“It is amazing when you think of the time, effort and ingenuity that went into making bows and arrows using only natural tools that were available to them back in the day,” Soares said.

Andrew Alto, from Santa Rosa, said he really enjoyed all the culture-related activities offered at the academy and enjoyed this year’s SYA better than the one he attended last year.

“I like anything that has to do with our culture,” said Alto, 15, as he continued to work on his arrow. 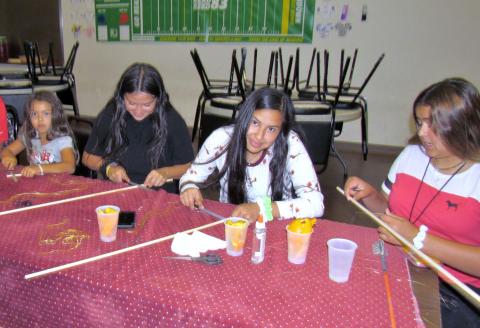 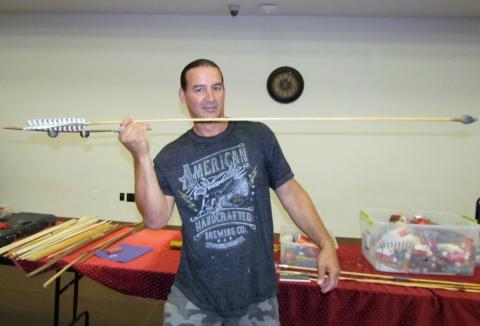 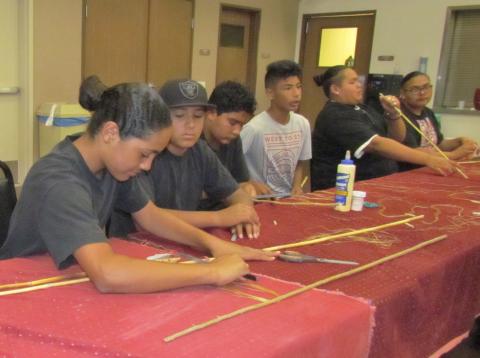 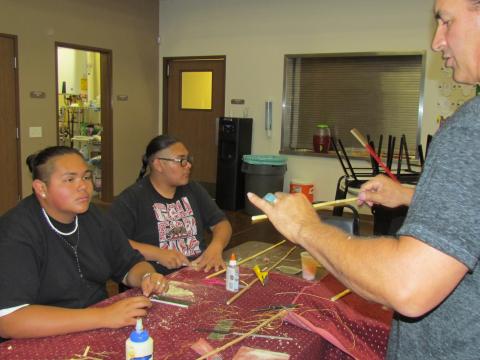