Conference Teaches Youth About Being Leaders

AILOTT prepares youth for the future ◆ By Mike Hiles

"This was a way to highlight and educate folks on our California Native populations as they sometimes tend to be invisible in the larger Native context," said Anna Nazarian-Peters, Associate Director of Student Life and Development and Coordinator of American Indian Student Services at CSULB, who helped organize the event.

More than 100 people attended the conference, which included about 90 young students. Soboba Tribal TANF took 16 youth to the all-day event, held on Nov. 18. Program Specialist Crystal Ruiz said the staff tries to take a group to the event each year.

"Participation in the activities was open to both adults and youth so I was able to make a bracelet and participate in rabbit stick throwing plus a traditional hoop and spear game," she said. "I enjoyed listening to keynote speaker Mati Waiya (Chumash) speak on the need to fight for tribal rights and to hear him encourage youth to keep pursuing education in order to be powerful with their voices in the future."

Andrew Vallejos, the Higher Education coordinator for the Soboba Band of Luiseño Indians, said he was glad to see so many local tribal members go.

"Any opportunity for our youth to learn about colleges that understand their culture and offer services to help them reach their academic goals is wonderful," he said.

"Our campus has recruited Native Students to our campus since the fall 1968 through the Educational Opportunity Program and Johnson O'Malley grants," she said. "Currently, we have 143 self-identified Native students enrolled this fall semester and around 690 students who state Native American heritage as one of their ethnicities."

The conference is designed to bring together students to provide them with an awareness of culture, career and educational opportunities. The event enhances the opportunity for the community and campus to unite and work towards a better future for American Indians as a whole.

A series of workshops focused on college admission and financial aid qualifications as well as California Indian culture with storytelling, bird singing and traditional games.

"The event is organized by our American Indian Student Council, which is our student club on campus, along with Native faculty and staff," said Nazarian-Peters who has been at the college for almost 19 years. "The breakout session workshop topics were decided by the students, faculty and staff based on personal connections with the presenters."

She said feedback on the event was very positive with students enjoying the workshops and Jacqueline Nunez's storytelling presentation.

"We've learned through the years that the students' interests are piqued when the workshops are interactive," Nazarian-Peters said. "I would say the program has shrunk considerably in budget, scope and size. Many universities today host similar motivational day events to encourage Native youth to attend higher institutions, which is great."

"I shared with my family how much fun it was and how easy it was making baskets," said Caitlyn, 13.

High school freshman, Adriana Briones, enjoyed being outside and going to the different workshops.

"I learned how to weave a basket and gave it away to my grandma," said Adriana, 14.

Twelve-year-old Ciara Ramos and 13-year-old Jeremiah Ramos also attended the AILOTT conference for the first time and thought the workshops were a lot of fun.

California Indian workshops took place at Puvunga, which means "The Gathering Place" when roughly translated from the Tongva language.

"It refers to the general geographic location of our campus and surrounding community in Long Beach, and more specifically to the open, natural space where we had our workshops," Nazarian-Peters said. "There is cultural and religious significance of the area for the Tongva as it is the birthplace of their religious 'prophet' and religion. In addition, the location is where various Native peoples would gather to practice their religion historically."

She said that people from as far north as what is now Monterey Bay and south to portions of Baja, California travelled to Puvungna annually. Today, it continues to be a gathering place for the Tongva and local Native communities.

"About 10 years ago, the American Indian Student Council decided to call CSU Long Beach, 'CSU Puvungna' to honor the land and people of where our campus is situated," Nazarian-Peters said. 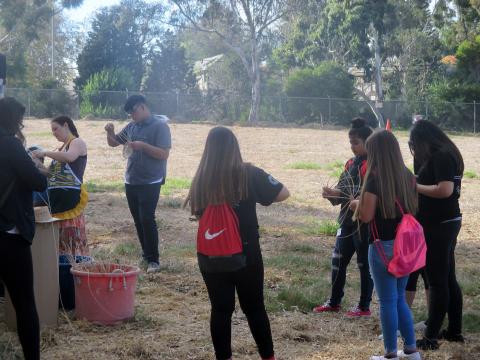 Youth attending the American Indian Leaders of Today and Tomorrow conference at Cal State University, Long Beach, also got to learn about basket weaving as part of the California Indian Cultural Awareness Day

Victor Hurtado participating in a game at the AILOTT Conference and California Indian Cultural Awareness Day at Cal State, Long Beach in November