Comic Books are a Serious Subject at Noli Indian School

Noli Indian School Principal Donovan Post started collecting comic books when he was eight years old. He had boxes in a storage shed filled with everything from Green Lantern to Blue Beetle and many titles in between. To help alleviate the storage issue and to share his love of comics with others, he launched the Comic Book Club at school for students in sixth through twelfth grades.

"It's actually more of a Pop Culture Club where we talk about movies, video games, action figures and other things besides just comic books," Post said. "I'm real big on nerd culture."

During lunch period every Friday, students are free to come in and peruse Post's collection and choose a book or two to read. The members also discuss their favorite villains, plot lines and superheroes.

Eighth-grader Frank Moreno joined last year after his friends asked him to do so.

Post said the cost of comics has gone up tremendously over the years, so he is happy to share them with the kids who don't have extra money to spend on them.

"My comic book habit feeds them," Post said. "I was not a good reader when I was young but I have been an awesome addict since I found comics when I was about eight."

"I got involved to learn more about comics because my son was into comics. His uncle has a big collection and turned my son onto them and I was feeling a bit left out," Miller said. "I love the characters that aren't necessarily mainstream. I'm not really interested in characters that are unbeatable or too powerful; I enjoy the ones with flaws that lose sometimes but always come back."

Post said Miller also brings his love of table-top games such as science fiction fantasy's Warhammer to the club. But the ultimate goal of the club is to get students to read more.

"I enjoy the club because most of the time we are venturing into something new for all of us," Miller said. "Donovan is kind of our facilitator that guides us along the journey. It's nice to not just select comics or books blindly; he has a really good grasp of just about any comic run out there."

Sixth-grader Max Hernandez heard about the club from friends and joined this year. Xavier Hernandez said he likes talking about comic books and going on field trips to local comic book stores. The eighth-grader joined the club last year.

Post said students must maintain a certain grade point average to be able to go on trips and this year all the members have 3.0 to 4.0 GPAs. He said almost everyone in the club is on the honor roll and those that aren't are working towards that expectation.

Miller said most of the club members are middle school students who don't play sports so he doesn't have much interaction with them outside of the club meetings.

"They have different interests than I do and I really get a kick out of listening to them interact and discuss these interests. The thing that stands out is their sense of humor; they are really sharp and that sharpness carries over to their humor."

Post said the Common Core Standards began including graphic novels and comic books as part of the school curriculum about a year ago. There has been positive feedback from the school's English department because of the club leading to a strong interest in reading.

"Some of the students who had refused to do reading projects get into the club and realize that they can use a book related to comics or something similar for their report and it changes their whole learning experience," Miller said. "They become interested in English again – or maybe for the first time." Eighth-grader Carmel Valenzuella IV was one of the first club members to use a comic book as the basis of an inquiry report for his English class. He had to describe the main character, main problem, the protagonist and then explain it to his class, using a PowerPoint presentation.

"I like this club because I get to be myself and talk about what I like," said Carmel, 13.

Miller said when he was in middle and high school he thought he was "too cool" to belong to any school clubs but realizes now that he really missed out.

"I use my own testimony to get kids involved more," he said. "If more kids realize how cool Comic Book Club can be, I am sure they would join. Sometimes taking that healthy risk to try something new is the most difficult thing to overcome. But whether it be a club, sport or some other type of organized activity, I always recommend students give it a try."

Miller said the club has helped him reach kids on another level.

"I was apprehensive at first to be an adviser for a club that outside of Superman and Spiderman I knew nothing about. However, I found that my lack of knowledge actually helped me to connect with the students, especially the experienced kids that were now teaching me. They really enjoy that part," he said.

Post said he is glad he can offer a place for students to go and have fun and be safe and happy. 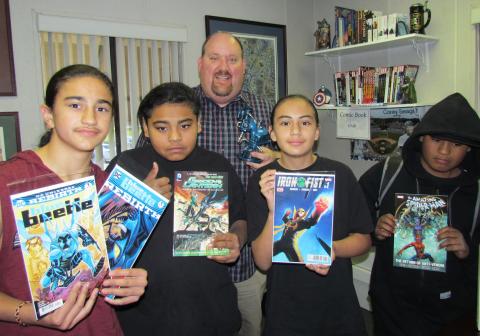