He is given MSJC Athletics' first President's Award ◆ By Mike Hiles

Charles "B-Bop" Silvas Sr. was presented with the inaugural President's Award at the recent Mt. San Jacinto College Athletics Hall of Fame Class of 2017 inductee ceremony. Silvas is a former coach for the college and a longtime supporter of the Athletic Department.

The President's Award is an honor bestowed on someone who has contributed in many different ways to the success of MSJC's Athletic Department.

"Charlie has not only supported the men's basketball program, he has taken an interest in our football, women's basketball and women's volleyball programs," said Patrick Springer, Dean of Physical Education & Athletics for MSJC and chairman of the Hall of Fame Committee since 2008. "The contributions are too many to total but one specific memory is of Charlie and Yvonne (his wife) taking the time to visit and nurse back to health one of our former basketball players who had a season-ending knee injury."

Springer said the Hall of Fame event, which launched in 2010, is an opportunity to celebrate and document the achievement of outstanding contributors to the institution and more specifically, the Athletic Department.

"Charlie has helped many of my men's basketball players develop from boys to young men," Springer said. "The patience he has demonstrated while working with these young men adds an element to our men's basketball program that would be missing without his and Yvonne's involvement."

Sal Valdivia introduced Silvas at the ceremony. A lifelong friend and teammate of his from MSJC's football and baseball programs, they worked together on organizing fastpitch softball tournaments at local reservations.

"I have followed MSJC's sports program for 50 years, ever since my senior year in high school," said Silvas, 68. "I've gotten a lot of enjoyment watching all the kids come through their program. The coaches work hard to get their players recognized."

Born in 1949 at the Hemet Valley Hospital, Silvas lived in Hemet until he completed eighth grade at which time his family moved back to the Soboba Reservation.

The couple, who met in a typing class at MSJC, has been married 48 years and have three children: Dondi, Charlie Jr. and Denise. They also have four grandchildren and one great-grandson.

"I am very proud of my father and all that he has done for our community," said Dondi Silvas. "He and my mother both have huge hearts and are truly blessed to be able to help out in any way, whether it's sponsoring an entire team, event or individual. They have taken in many of the student athletes that needed a place to stay or needed to recover after surgery."

Dondi Silvas said many of her father's former athletes ask about him.

"It's always good to hear stories from them how he touched their lives and made them the person that they are today," she said. "I'm very proud of my father and his love for sports and helping our community. This recognition by MSJC is a huge honor for him and our family."

Some of Silvas‘ favorite memories stem from his time at San Jacinto High School where he befriended many of his teachers. He made lots of good friends in the San Jacinto Valley through sports and his brother, Allynn. When Silvas worked for the Soboba Band of Luiseño Indians, he was also sports director and became known for the tournaments he put on.

His reputation got to be so well known that in 1979 an Amateur Softball Association (ASA) tournament on the reservation had an all-Congress team play. They were the world's best players at the time. ASA players are in training to compete in the Olympics.

Silvas started coaching in 1978 for San Jacinto High School's freshman/sophomore football and continued that plus basketball and softball for 17 years. He was one of the first inductees into the high school's Edward Hyatt Athletic Hall of Fame

"My favorite memory about coaching football was getting the reservation boys involved in sports," he said. "I'd pick them up at 5 a.m., practice at 6 a.m. and take them home. The team beat Aquinas out of San Bernardino in 1985 after only winning to them five times in 17 years on their home turf. The team jumped all over me in celebration."

Silvas had eight Native Americans from Pauma, Pechanga and Soboba play softball for San Jacinto High in the 1978/79 school year.

"Being in education for as long as I was – after coaching at the high school, I went on to junior college and coached women's basketball there – I was proud that Soboba has had a lot of kids go through the San Jacinto sports programs," he said.

One of Silvas' grandchildren, Joseph Burton, is a professional basketball player in Japan after playing for Oregon State. He also played for Denmark, Holland and France.

When Silvas was five years old, he was walking outside his father's place of business and Pete Morillo noticed him walking with a lot of hop in his step. He asked Charles' dad, Leandro Lee Silvas: "Who's that bopping up the road?" and the nickname of "B-Bop" was given to him and he is still known by it today.

Silvas said playing sports from the age of seven to 57 took a toll on his joints so he finds it hard to get around well, but he loves to watch his great nephews play sports and closely follows Burton's career. His granddaughter is a sophomore at San Jacinto High School and just made the JV basketball team, so he will be attending those games soon. 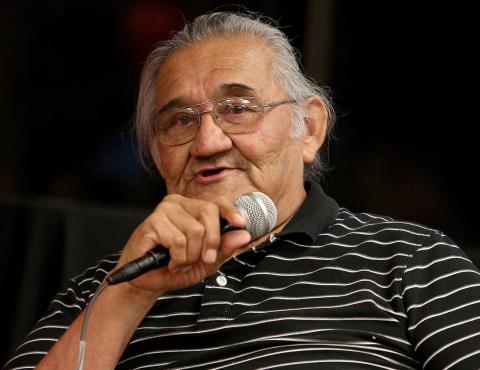 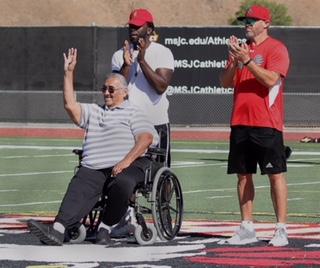 Charles "B-Bop" Silvas was celebrated during halftime at MSJC's homecoming game on Oct. 21 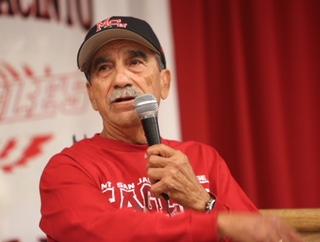 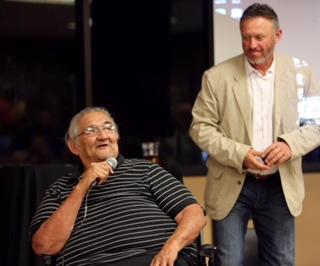