April is Autism Acceptance month and to help families who have children with special needs, Loren “Nena” Davila and Antiana Briones of Suvóova Sweet Treats teamed up to host a marketplace at the old Soboba Casino on April 3.

“We wanted to put together an event to show that it’s important to treat everybody the same; no one should ever be treated as being less because they are autistic or anything else,” Briones, of Soboba, said.

Davila’s 14-year-old son, Adrian, was diagnosed at the age of 3.

“We had no idea what autism was and the community didn’t have a lot of resources,” she said. “I joined a lot of Facebook groups and started getting more involved and learning more about the topic. I also started a small business of my own so I could be a stay-at-home mom.”

“Nena’s” are sweet treats of common favorite gummy-style candies that she coats with her special secret recipe to make them moister and tastier.

Davila, of Hemet, said she has hosted small events to help promote autism acceptance and spread awareness but was happy to partner with Suvóova Sweet Treats to have such a large-scale event at Soboba. She has more than 13,000 followers on her social media platforms and many were excited to hear about the marketplace.

Jazmine Carmona of San Jacinto attended with a large support group of family members for her 3-year-old son, Jayden Gaarde, who was diagnosed when he was two and a half.

“He was walking on his tippy toes and not paying attention,” she said. “I was arguing with the doctors who didn’t think anything was wrong and I’ve been fighting for him ever since.”

Carmona lets her family members know everything she is teaching Jayden so they can reinforce it when they are with him.

Davila said the event at Soboba was designed to bring families together because many hesitate to go out in public for fear of being judged. “We wanted to create a place for families to enjoy a day out where they can shop while the kids enjoy fun things to do.”

She said local schools have made progress in helping students like her son, stating that it was much harder when he was little. She said he is non-verbal but very active and loving.

“He knows how to manage a cell phone and can find any YouTube video he wants,” she said with a proud smile. “My son helped us all understand more about kindness and patience.”

Davila’s sister, Jerelly Saucedo, said the whole family came out to support the event for Adrian and all the families that learned about the event through Loren’s social media communications and Antiana’s community contacts.

Along with free face painting by Marlene and animal balloons by Mayra Arce, there were several sensory booths to provide unlimited fun activities for all children. From bubbles to bins of gel-filled orbies, slime and putty, kids of all ages spent a lot of time actively playing during the seven-hour event.

Many of the vendors offered specific items that have been found to be popular and helpful for those that have been diagnosed with autism spectrum disorder. ASD is a neurological and developmental disorder that affects how people interact with others, communicate, learn and behave.

Chad and Jacquelyn Loeffler were sharing their “think play magic” sensory items. Their grandson, Maddox, who tragically passed away a few months ago, had autism. Their daughter, Chelsey Romano, began creating play dough kits, scented slime and custom crayons for Maddox and the projects grew into a business.

“We went through 1,000 play dough recipes until we found this one and our dough can last up to six months,” Jacquelyn, of Menifee, said.

She said Maddox was an active child who stopped speaking when he was two years old and was diagnosed with ASD. They were in the process of teaching him sign language to communicate.

“He spoke volumes without being able to talk,” Jacquelyn said.

The play dough kits help teach kids about color, matching and other skills packaged in fun themes such as dinosaurs, unicorns and even a little mermaid. She said the kits provide stimulus for both sides of the brain and encourage imagination to develop.

The family attends many outdoor markets to share their products throughout Lake Elsinore, Murrieta and Temecula and also on Instagram @thinkplaymagic and Etsy at www.thinkplaymagic.Etsy.com.

Another small business showing their popular products was Puzzle Peace, based in Hemet. “Sensory toys for sensory needs” that are a favorite of five-year-old Jaxon, led his mom to start the business and share them with others who can benefit. They are available on Instagram @puzzlepeacetoys.

ASD varies from child to child and sometimes isn’t diagnosed at an early age. Neurodivergent Artistry’s Samantha Cragun discovered only recently that she is on the spectrum. The 35-year-old artist uses acrylics and pastels to capture emotions such as anxiety and fear. She spent her life being told she was bipolar, depressed and other things until she stumbled upon a person who was talking about their experience with autism.

“This woman’s traits were like a list of my whole life, my entire personality,” Cragun, of Perris, said. “It has helped me because it’s a confirmation of knowing who you are and understanding yourself better.”

She said she struggled socially and didn’t understand the “why” of things. A good student, she said she pushed herself because she was always comparing herself to others.

“Had I been diagnosed at a younger age, I think I would have been more forgiving of myself and would not have spent so much time thinking about why some things were so easy for some people but not for me,” she said.

Since the age of two, Cragun wanted to be an artist and during the COVID shutdowns when she couldn’t work at her hair salon, it rekindled that love she had for it. She shares her story with others through local art markets and on Instagram.

The marketplace featured food vendors of all kinds with tables set out so families could sit together and enjoy Indian tacos from Frybread Kitchen and Ivan Peralta’s Kettle Corn among others. Music from DJ Mike Nevarez kept things upbeat, as did the regular announcement of raffle prize winners.

Eva Prendes is an Associate Division Manager for the state-funded nonprofit, Toward Maximum Independence, which offers a community integration training program for those with intellectual disabilities. Other TMI programs offer much needed resources for families throughout Southern California. For more information, www.tmi-inc.org. 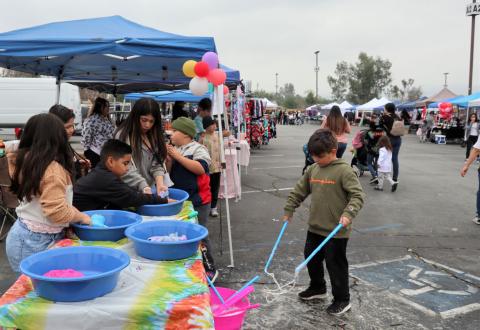 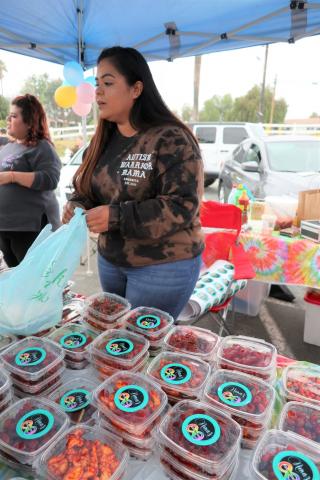 Loren “Nena” Davila and her sister, Jerelly Saucedo, at left, assist customers at their candy booth at the Autism Acceptance Marketplace 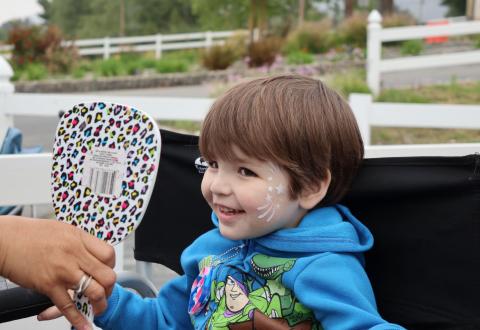 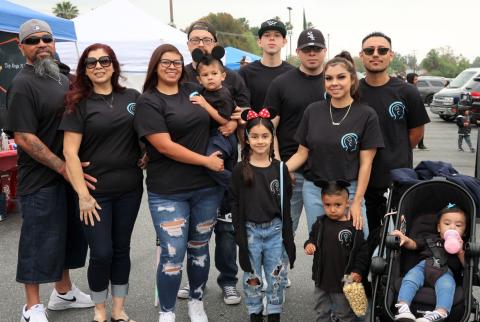 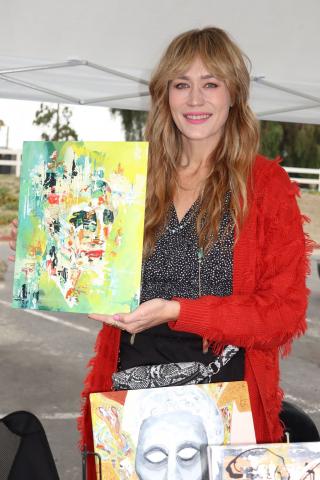 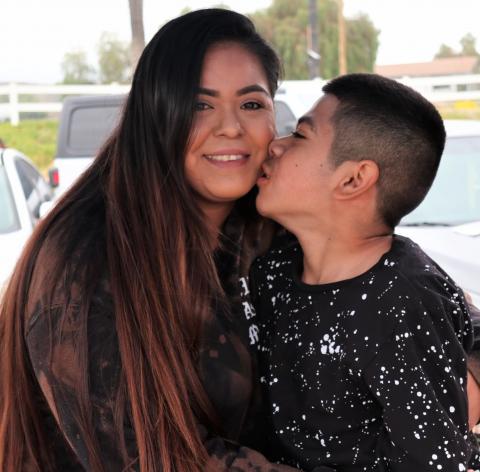 Loren” Nena” Davila gets a kiss from her son Adrian