"This was a schoolwide event to have our students experience their culture by living it," said Marcus, a counselor and Culture Department instructor at Noli. "Having the students, staff and community come together to make this event happen shows them firsthand what responsibility means."

He said the purpose of the annual fiesta is to give back to the community by way of song and participation but also to review the ancient ways of gathering. Noli has a student body of 144 in grades six through 12.

"We had a very positive turnout," Marcus said. "We had traditional Payomkawish (Luiseño) songs used for ceremonial events such as the annual gathering. We bring them out to recall our ancestors who are there with us – it makes them happy to see that our youth are being of service to the community and being looked on as a good example for younger students."

A group of singers from the Pechanga Band of Luiseño Indians were led by Robert Villalobos, who was taught the songs as a teenager by Pechanga tribal elder, Raymond Basquez. Their songs began after the opening ceremony which included a tobacco "blessing" ceremony and prayer.

Traditional bird singing and dancing, which are considered to be more social as opposed to ceremonial, were also a big part of the event.

"This is a time to gather and dance as we sing stories about our creator, the stars, universe, animals, land and the travels our people made to come together," Marcus said.

Students of all ages – from preschoolers to high school seniors – got to demonstrate what they have been learning and practicing.

Dianne King, director of the Soboba Tribal Preschool for almost 10 years, said her 51 students aged two through six sing and dance daily at school. The boys take out the gourds they painted and the girls put on ribbon skirts they have made with the help of Tashina Miranda Ornelas' culture students at Noli.

"Because they do this every day at school, they are pretty comfortable at a public event like this – and they like singing and dancing with the older kids," King said. "Our goal in doing this is to teach them they are all Indians and that they are all special."

King enjoys the event because it gives her an opportunity to see some of her former students. She said parents are invited to pick their children up an hour early so they can watch them have fun with their classmates.

"It's nice they're getting involved in their culture – it is always such a proud moment for me to see that," King said.

Ornelas said her culture students love hands-on activities and she feels it is the best way for them to learn. She said the fiesta itself is a great learning tool for students because some live too far away from their own community to participate in its events.

"This is a great chance to show what we do at Fiesta," she said.

Some of the students worked with the Soboba Culture Center's Canyon Crew to build the ramadas, which allowed them to learn how to do thatching and provide even more community service. Several ramadas were set up with roofs and walls making three-sided enclosures from natural materials.

Ornelas said the Canyon Crew went to homes on the reservation to trim residents' palm trees to get the materials needed. It was a great way to help the community clean their trees and yards but also a great way to repurpose the plants.

Marilyn Castorena, from Morongo, is a sophomore at Noli and worked on the ramadas.

"This was my first time helping out," said Marilyn, 16. "It took us about a week and a half to build all these."

Friendly competition was also a big part of the event as several tug-of-war contests were held, along with water-balloon tossing and a horseshoe tournament.

Ed Soza and his 18-year-old granddaughter, Alyssa Soza, were a team to beat as they carefully and skillfully pitched horseshoes. He said he and the Noli senior practice at home whenever they can.

Soboba Tribal Elder, Marian Chacon, said the fiesta is important as it brings the community together to celebrate their culture.

"I like watching the horseshoe tournament and seeing and hearing all the singers and dancers; I like everything, really," she said.

The staff of Noli treated all the guests to a great barbecue lunch, as they all pitched in to cook and serve.

The Soboba Band of Luiseño Indians continued to share its culture and sense of community with an all-day Fiesta on Saturday that was highlighted by a horseshoe tournament and games of peon, a traditional Native American guessing game, that started at sundown. 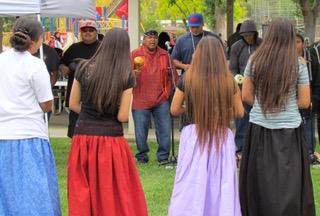 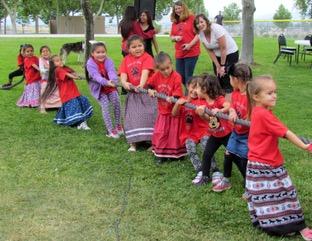 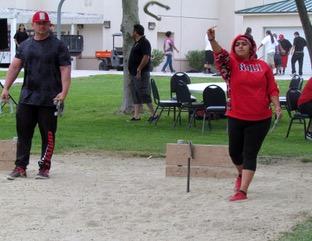 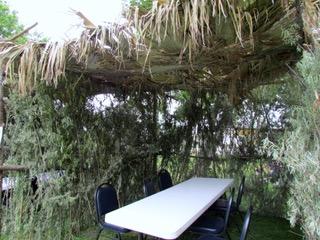 One of several ramadas constructed by Noli Indian School culture students and Soboba Culture Department Canyon Crew members in time for the school’s Annual Fiesta. The ramadas were also used for the community fiesta the following day at the Soboba Sports Complex